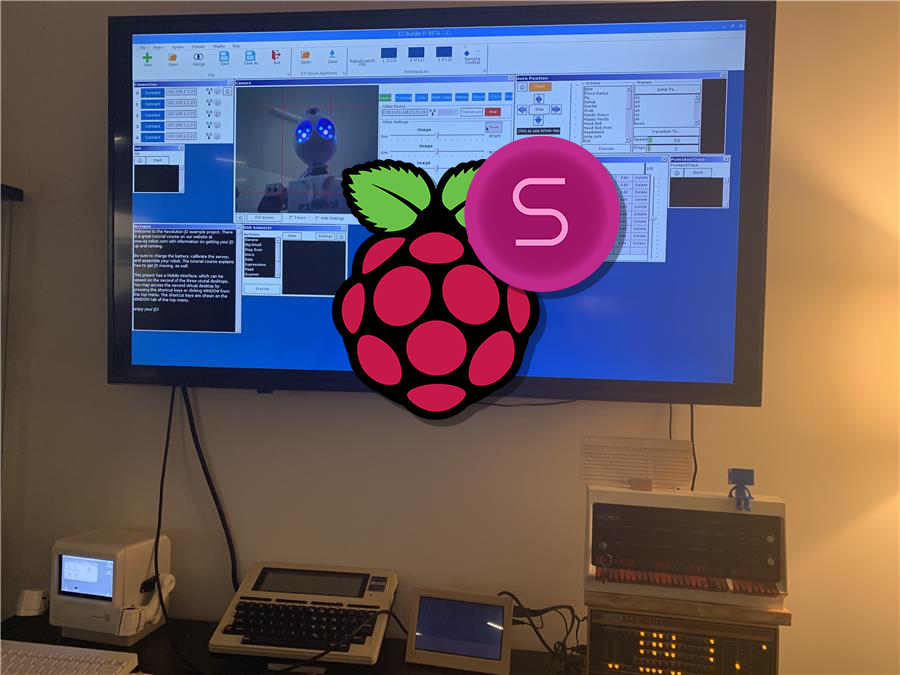 EZ-Builder Designer software can install on Raspberry Pi, and more specifically any operating system supporting MONO (Linux, MacOS, etc). There are a few limitations on the Raspberry Pi version of EZ-Builder in comparison to Windows EZ-Builder. These limitations are based on the dependencies of certain behavior controls. For example, when a behavior control is created with Microsoft Windows dependencies that do not exist on Raspberry Pi, the control will not work. Some of these controls are Speech Recognition, Joystick, WiiMote, and USB Cameras.

There are two ways the Raspberry Pi can be used with Synthiam. The Pi can either run EZ-Builder or the EZBPi Server. This server allows an EZ-Builder instance to connect to the Pi and use components and peripherals connected to the Pi.

This image is EZ-Builder Pi running on a Raspberry Pi B . Because the Pi does not have onboard WiFi, there is a USB WiFi dongle connected to the Pi.

View the Software Download page to get the Raspberry Pi ZIP file and follow the installation instructions below.

1) Install the Mono framework on your Raspberry Pi terminal shell, which is pretty easy...

2) Next, unzip and extract the EZ-Builder installation file that you downloaded in your home folder...

There are a number of feature limitations on the Rasberry Pi version Vs. Microsoft Windows. These limitations are no Blockly, no WiiMote, no Speech Recognition/Synthesis, and no 3d robot designer. Plugins are supported long as they do not use unsupported libraries.

1) Download your plugin from https://synthiam.com/Software/Manual into the ~/Downloads folder

2) Navigate into the EZ-BuilderPi folder

4) You will see a window open that shows the installation debug of the plugin. If there are no errors, you can press any key in the new window to close it. Reload EZ-Builder and the plugin will be there.

If the plugin is not in EZ-Builder Add Controls, you may have not installed it in the correct location, or there was an error. The plugin must be installed while you are in the ~/EZ-BuilderPi folder. AND you _must_ execute EZ-Builder.exe from the ~/EZ-BuilderPi folder as well. This is because the folder you launch the executable from is the folder that contains the configuration settings.

#22   Feb 2019
Thanks man - there’s been so many people struggling to program robots that I realized they could benefit from EZ-Builder. So I’m focused on making it run on everything.

It saddens me when I see such terrible robots with such boring features from other platforms. It’s 2019 and we’ve been producing amazing robots for 7 years! No other platforms are catching up, so I might as well give them a hand

pashley
USA
#23   Feb 2019
DJ, I know what you are saying, but it’s not quite as bad as you think. I have three EZ-B robots (two Sixes and one JD) and I always turn to them when I want to do real robot experimenting. Ez builder is fantastic for getting EZ B robots to move, see, speak, and more. The other electronic stuff is just a bit of fun when you want to see some LEDs blink. Please keep up your excellent work in both worlds. BTW, the Friday nights are fun.

Mickey666Maus
Germany
#24   Feb 2019 — Edited Feb 2019
Without EZ-Robot, I would have never even started with robotics...all the other stuff out there is either boring, or has such a high entry level that it  scares you away before you even get going! Its seems like robotics these days is either being just a consumer, or to be a MIT student!
EZ-Builder is clearly bridging this gap!!

I would have never met all these awesome people over here, so thanks for giving us a new home for the forum...And I am really looking forward to whats happening with EZ-Builder, you guys are being super productive!!

Thank you to the community for your help, and @DJ for making this possible!

Mickey666Maus
Germany
#26   Feb 2019
Yes, it can be nervwrecking at times...took me a bit to change the country code too, sometimes things are a bit messy if they go wrong! But all in all, I really like to run my robot on a non Windows dependent plattform!!

Its great that EZ-Builder migrates to the Raspberry Pi...maybe once everything is done we could make an image for users to download, so it would be the most hassle free option to get going?

Great you managed to get it to work!!

#27   Feb 2019
The EZ-Builder Pi has been updated - it also now supports the EZBPi Server. This is a server which EZ-Builder can connect to for access to the Pi Cam and the Serial Ports on the Pi. If you have bi-directional servos connected to the Pi, they can be controlled by EZ-Builder on the Pi.