In this tutorial, we will provide technical information about servo-motors and how they work. We made it easy to get a robot up and running, however, there is a lot of fun and interesting things to learn about how the robot works. The more you know, the more you can get your robot to do!

How To Move Servos

While this tutorial focuses on what a servo is, we provided this for those who wish to skip how a servo works and jump directly into how to move a servo. Of course, if you skip this tutorial and jump into moving servos, you will end up back here because someone will ask a question on the forum, and someone will direct you here. So, if you're going to skip this section, click here to learn how to move servos in ARC. This document covers mostly PWM Hobby-style servos, as they require the most care when being used. For a difference between PWM Hobby servos and Bi-directional serial servos, we cover the difference in this document.

What is a servo motor?

A Servo motor (or servo) is a rotary actuator that allows for precise control of angular position, velocity, and acceleration. Servos are found in many places: from toys to home electronics to cars and airplanes. If you have a radio-controlled model car, airplane, or helicopter, you are using at least a few servos. Servos also appear behind the scenes in devices we use every day. Electronic devices such as DVD and Blu-ray DiscTM players use servos to extend or retract the disc trays.

Synthiam uses servos that manage the movement of joints, pan & tilt, and continuous rotational movement. For PWM Servos, the EZB sends an electrical signal that tells the servo what position to reach and how quickly to get there. Bi-directional serial servos receive a protocol command by the EZB and the respective robot skill. Servos come in a variety of shapes and sizes for different applications. You may want a large, powerful one for moving the arm of a big robot or a tiny one to make a robot's eyebrows go up and down. By linking many of these servos together, you can very easily create robots that perform complex real-world operations.

A hobby servo uses PWM as well. The "frame" of a servo PWM signal is 20ms. This means the signal frame repeats every 20ms. The signal itself is only 2ms, where the rest of the frame is empty (low). Many controllers, such as Arduino libraries, do not maintain the 20ms specification defined for servos. Because of this, challenges have been introduced to servo manufacturers when decoding incoming PWM signals. This has caused the need for servos to be "Smarter" by adapting to the unusual PWM transmitted by poorly written libraries that do not adhere to the servo PWM Standard. The EZ-B does adhere to servo PWM standards.

How does a servo motor work?

The simplicity of a servo is among the features that make them so reliable. The heart of a servo is a small direct current (DC) motor, similar to what you might find in an inexpensive toy. These motors run on electricity from a battery and spin at high RPM (rotations per minute) but put out very low torque (a twisting force used to do work — you apply torque when you open a jar). An arrangement of gears takes the high speed of the motor and slows it down while at the same time increasing the torque. (Basic law of physics: work = force x distance.) A tiny electric motor does not have much torque, but it can spin fast (small force, considerable distance). The gear design inside the servo case converts the output to a much slower rotation speed but with more torque (significant force, little distance). The amount of actual work is the same, just more practical. Gears in an inexpensive servo motor are generally made of plastic to keep them lighter and less costly. On a servo designed to provide more torque for heavier work, the gears are made of metal (such as with Synthiam Servos) and are harder to damage.

With a small DC motor, you apply power from a battery, and the motor spins. However, unlike a simple DC motor, a servo's spinning motor shaft is slowed way down with gears. A positional sensor on the final gear is connected to a small circuit board. The sensor tells this circuit board how far the servo output shaft has rotated. The electronic input signal from the computer or the radio in a remote-controlled vehicle also feeds into that circuit board. The electronics on the circuit board decode the signals to determine how far the user wants the servo to rotate. It then compares the desired position to the actual position and decides which direction to rotate the shaft to get to the desired position.

Servos come in many sizes and in three basic types: positional rotation, continuous rotation, and linear. Regardless of the type of servo between PWM Hobby and Bi-directional serial, the servo formfactor can be in a variety of configurations.

A standard servo is what you normally find in R/C Hobby Toys. They are high-precision devices that can rotate a shaft up to 180 degrees. With the EZB and a Standard Servo, you can easily configure how many degrees to rotate the output shaft.

ARC takes care of the electrical communication with the servo for you, whether PWM or bi-directional serial. You can use standard servos for the head or arms of your robot.

The EZ-B has timing below 1ms and above 2ms to accommodate all servo types. Some servos do not fall within the specifications and require unusual timing. When testing with your servo, make sure you recognize the max and min values and set them in the robot skill settings. If a servo attempts to move further than its maximum position, it may be damaged. Additionally, if a servo is rotated too far, it will consume a high amount of current, and the EZ-B may reset.

Here are the timings for the EZ-B...

For example, the EZ-Robot EZ-B v4 has high accuracy, which results in 180 servo positions. The EZ-B v4 can control 24 servos simultaneously while it performs other various user-specified tasks. If your servos draw more current than our specification sheet defines, the EZ-B may run out of power and reboot itself. This is called a Brown-Out. To prevent brownout with many servos, provide alternate power. Check the manual on how to do that.

ARC handles the technical work for you. Merely specify the servo position, and voila!


How Does Continuous Rotation Servo Work?

How Is Torque Measured?

Now that we covered the basics of how-a-servo-works, the next question is torque. Torque is how much power the servo has. Different applications will require higher or lower torque. In most cases, you can get away with using a regular average torque servo. The average torque of a plastic servo is 2-3kg/cm @ 5 volts, and the Synthiam Heavy Duty servos are much more (consult the servo product information).

Something that is often overlooked is energy consumption. Consider this: there is no free energy. Torque equals energy and vice-versa. The Synthiam Heavy Duty servos will require more energy to move than cheaper plastic ones. Suppose too many high torque servos are connected to the EZ-B without a sufficient power source. In that case, it will "brownout" Browning-out means the voltage regulator could not keep up with the current draw, so the microchip rebooted itself due to low current. Do not worry, the Revolution Robots are powered by a strong LiPo battery and will support up to 24 servos!

So what do the torque numbers mean? Let's speculate the torque value of a servo was 50 Ounces per Inch

Well, if you had a servo arm that was one inch long on your servo, it would be able to produce 50 ounces of pull or push force at the end of the servo arm before stalling. If you had a 1/2 inch servo arm, what do you think the force would be? Yup, 100 ounces of force. How about a 2-inch arm, 25 ounces of force - easy, huh? 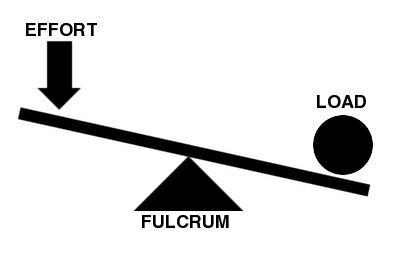 The most common servos in robotics are three-wire PWM Hobby Style (power, GND, PWM signal). These types of servos have been around for decades and are the most cost-effective solution. The shortcoming of these servo types is they have only one direction of communication from EZB to the servo. This means the servo only knows its position when instructed to move. When these servos are first initialized into a position, they will jump from whatever position is currently into the specified position. It will not transition slowly during initialization because it does not know the starting position before initialization. When robots use these servos, they will jump and sometimes cause damage preparation is not considered. The solution to avoid jumping is to manually move the robot joints into a position close to the initialization position, so the servos don't jump. This is more effort than using bi-direction servos, which will report their position to the software.

Bi-directional serial servos use a communication protocol that allows the servos to transmit position data to the EZB. These bi-directional servos can be queried for the position when initialized and transition to the new position at specified speeds. This prevents jolting/jumping of joints that are experienced with hobby PWM servos.

There's a number of bi-directional servos supported by ARC...