A Movement Panel is a type of robot skill responsible for moving the robot in directions (forward, left, right, stop, reverse, etc.). A movement panel robot skill integrates with the ARC environment and allows other controls or scripts to instruct the robot to move in any direction. When a movement panel is added to your project, it registers itself as the responsible control for directional movements. ARC has many movement panels. For example, there are HBridges, Continuous Rotation Servos, Auto Position GAITs, AR Parrot Drones, and iRobot Roombas.

An advantage of a Movement Panel is that you do not need to code logic for the robot hardware to move. Instead, use movement commands with the optional speed parameter to have the movement panel respond automatically. That will instruct the Movement Panel to do its thing, even for an H-bridge, drone, gait, etc...

The advantage to using movement panels is agnostic robot hardware per project. Consider if you built a robot that performs a specific task using an H-bridge movement panel. You can replace the hbridge Movement Panel with any other movement panel (such as a drone or Auto Position for Hexapod or humanoid).

This screenshot is of a robot project that contains a movement panel. All other robot skills can send commands to the movement panel to control the robot. For example, with a checkbox in the camera device, you can have the robot following a ball for any movement panel and any robot type. The same code can be used for a different robot hardware configuration by swapping the movement panel with another. 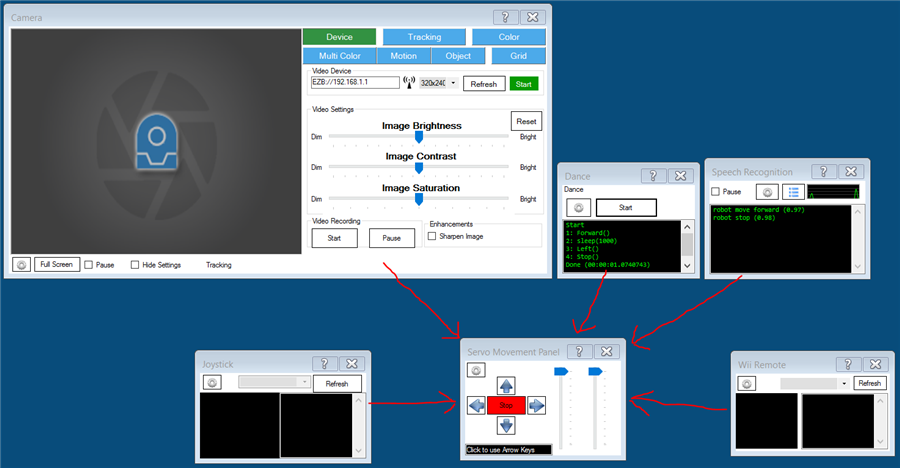 The ARC framework provides several pre-programmed directions: forward, left, right, reverse, stop, roll right, roll left, up, down, and custom. Movement panels will support the directions that are appropriate to their movement type. For example, an HBridge movement panel will not support UP or DOWN because the robot must have wheels and therefore cannot fly. You can see what directions are supported on a movement panel by the buttons visible on the interface. This diagram demonstrates how the various directions are expected to behave by movement panels. For example, turning left or right is expected to rotate on the spot. However, to turn slightly right while moving forward will require the robot to move forward with the right wheel speed somewhat slower than the left. 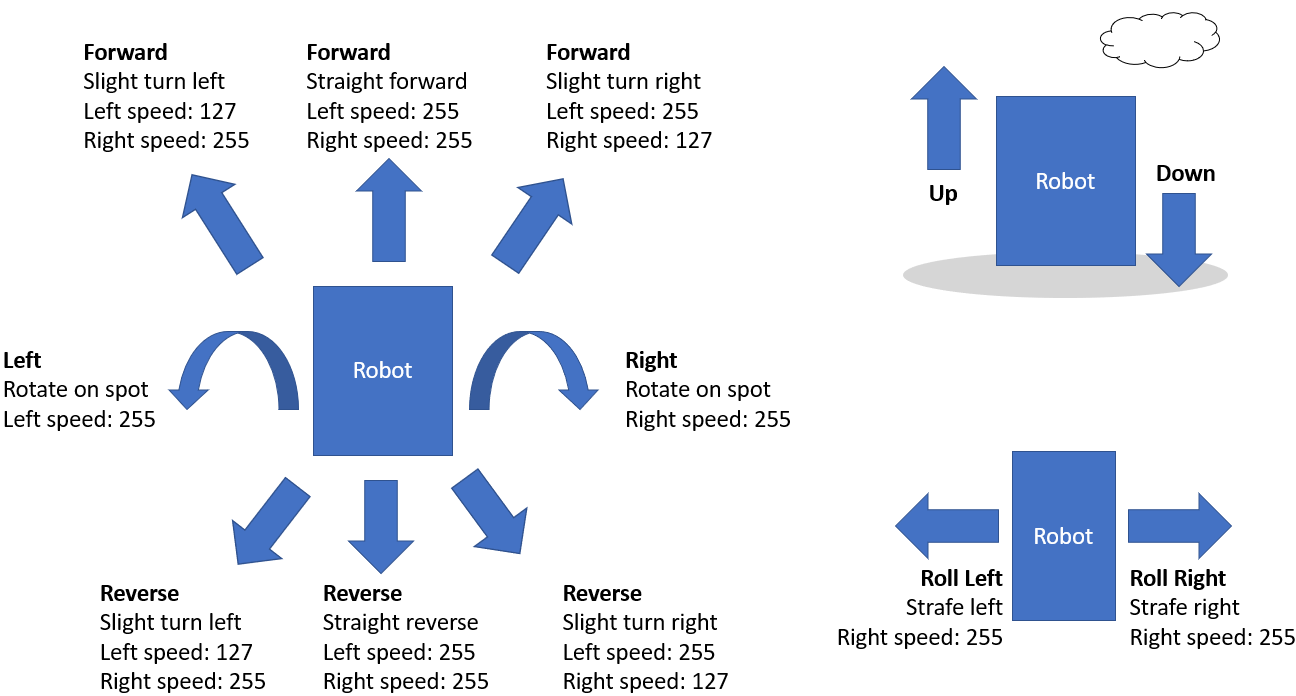 When specifying a direction to move, most movement panels will support a speed range between 0-255. The left and right wheels can have different speeds for driving forward with slight arc turns in either direction. This allows joysticks and tracking skills to control the robot's movement better.

When a Movement Panel is added and configured in your project, documented scripting commands will instruct the movement panel to begin moving the robot. If anywhere in your project, you executed the script command Forward(), the script engine will instruct the project's Movement Panel to begin moving forward. It is recommended to reference the script manually in ARC for the desired language. Click HERE for the manual of your preferred scripting language.

How About Speech Recognition? 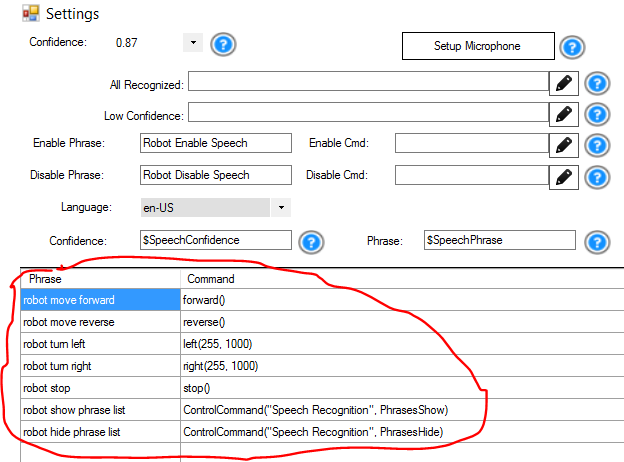 What About Other Controls?

Good question! Now that we know how the script can instruct a movement panel to move, how do other controls work with movement panels? Well, that's the magic of ARC. For example, if a Joystick Control was added to your project, pushing forward on the joystick will instruct the Movement Panel to begin moving forward. The Joystick control is pre-configured to send the Forward command to ARC. The registered Movement Panel will respond to the direction request. Let us take a look at the settings menu for Joystick Control. Here you will see the checkbox which assigns Joystick #1 to the "Control Movement Panel." 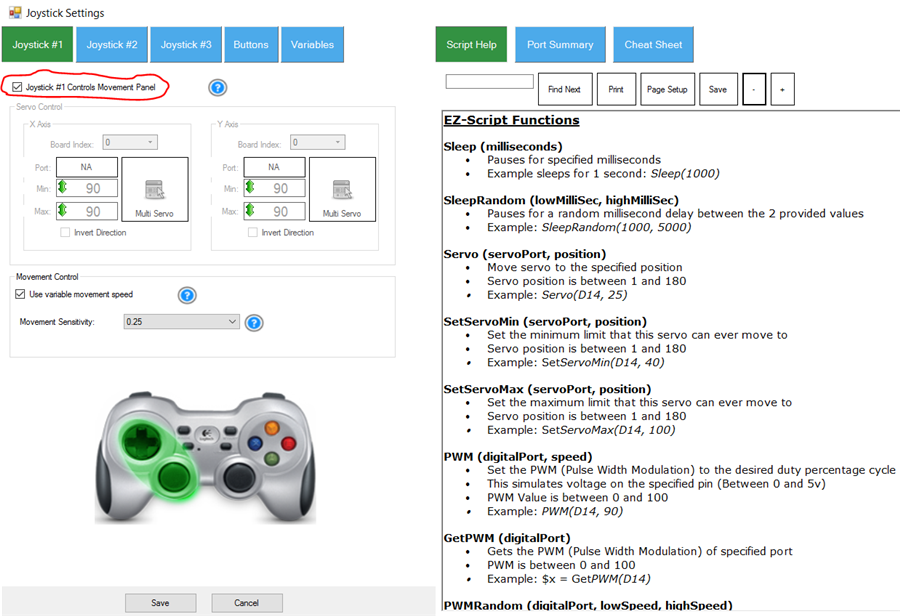 Even The Camera Control? 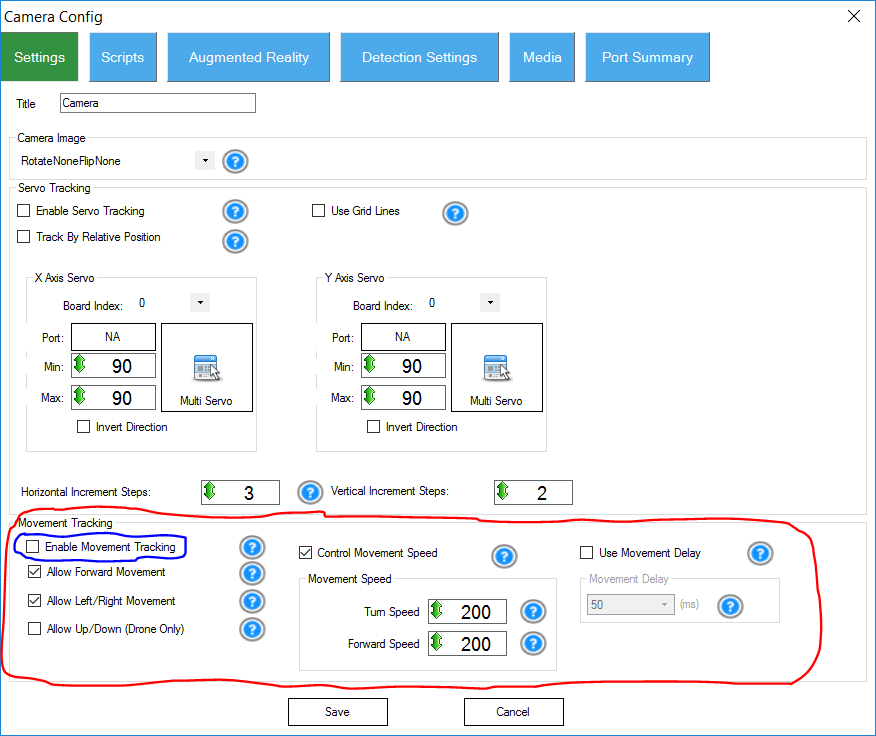 The trend in this lesson is that any control or script that deals with movement will instruct the current Movement Panel to begin moving the robot in the specified direction. This also applies to widgets within the User Interface Builder. Within the User Interface Builder, you may add buttons to control movement direction with script commands (Forward(), Left(), Stop(), etc.). Or, you may add the Joystick Pad. 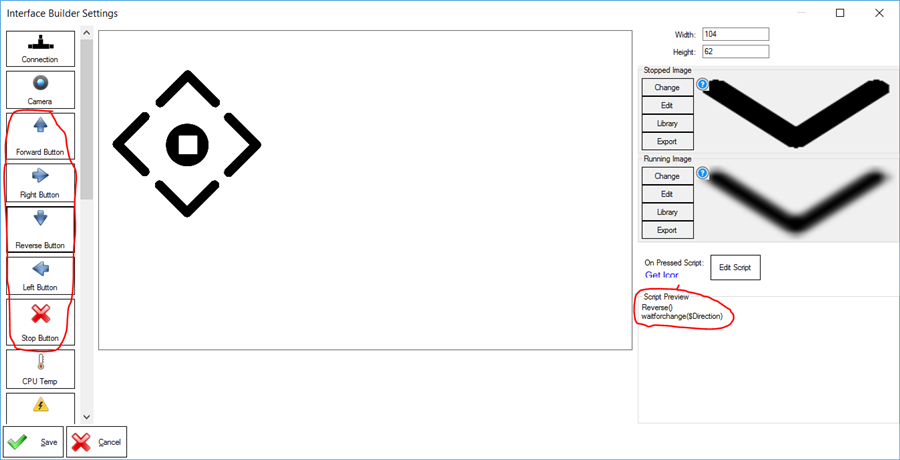 Here is an example of using the Joystick Pad in the User Interface Builder, which automatically instructs the Movement Panel. One advantage to the user interface builder's Joystick Pad is that it can control the speed of the movement panel supports it.

*Note: You can tell if a movement panel supports speed because it has a speed slider. 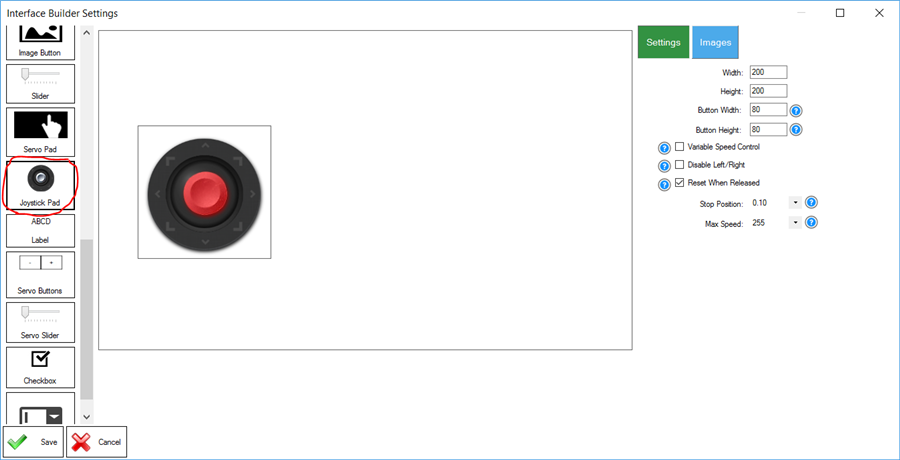 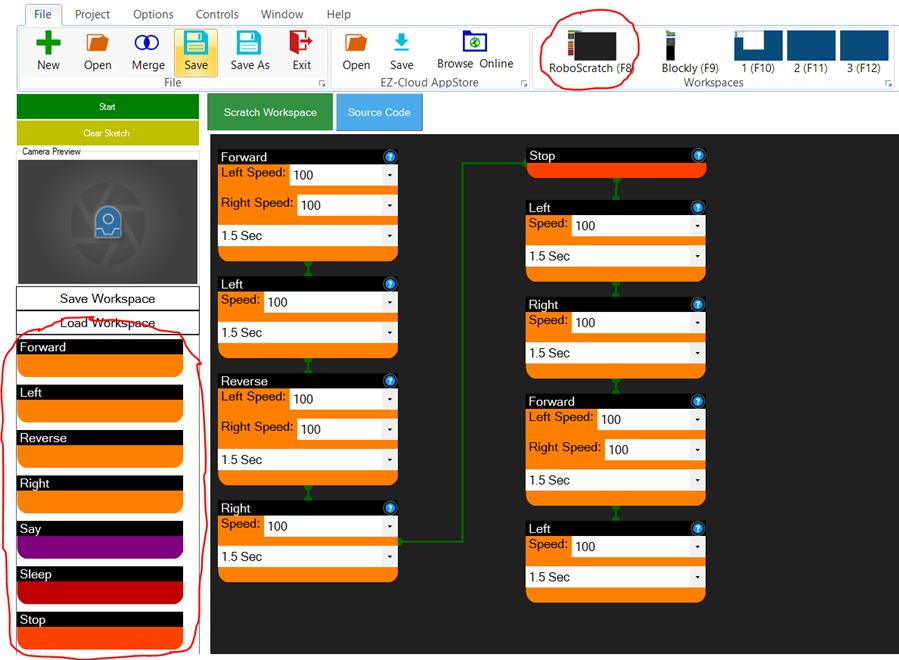 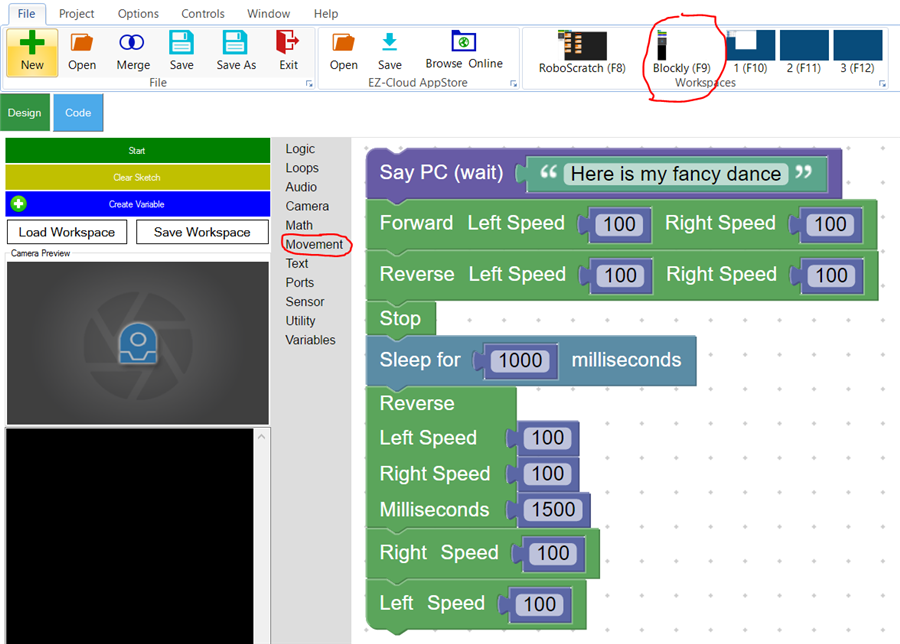 Can I Create My Movement Panel?

As mentioned earlier, ARC has many movement panels for HBridges, Continuous Rotation Servos, Auto Position GAITs, and even AR Parrot Drones or iRobot Roombas. However, if you seek to create a custom movement panel, the Custom Movement Panel is what you are looking for. The Custom Movement panel contains events for each direction (Forward, Left, Right, Stop, Reverse) that you may add custom code for. 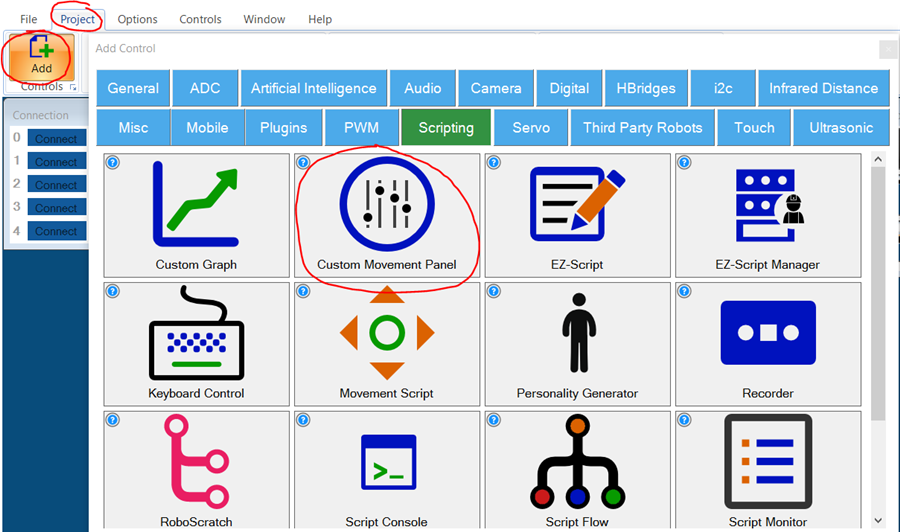 The AR Drone Movement Panel allows control of an AR Parrot Drone Quadcopter v1 and v2. The A and Z keys are used for Up and Down when using the keyboard mode. The Arrow keys are used to move the...

Use this to make your robot walk or move using servos. This movement panel is used for humanoids and hexapods. Create frames and actions to animate the robot servos into pre-defined positions. A...

A movement panel to control brushless motor controllers. These are used in hoverboards or many other robot types.

Use this skill if your robot requires a motor/movement controller that is not supported. You may assign scripts to the Forward, Backward, Left, Right, and Stop commands. Script functions are also...

Control the DJI Tello drone from ARC and receive the camera video feed for tracking.

A movement panel for using a two-channel hbridge that uses DC motors. There is no speed control with this movement panel. The motors will be either ON or OFF. An H-Bridge is an electronic circuit...

A movement panel for using a two-channel hbridge that uses DC motors. This will also control the speed of the motors using PWM signals to increase the robot's mobility. An H-Bridge is an electronic...

The inverted pendulum skill is designed to be used with the Sainsmart v3 balance robot﻿ but technically you can use the Sainsmart hardware, combined with ARC, to balance any robot.﻿

This control has been deprecated and replaced with iRobot Movement Panel

Movement panel for the Kangaroo and Sabertooth from Dimension Engineering.

This control supports the Sabertooth H-Bridge Motor Driver as a movement panel with variable speed in Simplified Serial mode.

The Sphero Movement Panel controls a Sphero over Bluetooth. Connect your computer to the Bluetooth signal of your Sphero. The computer will detect 2 COM ports for the Sphero; only one of them will...

The WowWee MIP robot is hackable with a UART port on the mainboard. Connect the GND, TX, and RX to an EZB’s UART TX and control it from ARC. You can power the EZB with the MIP's onboard batteries,...

The WowWee MIP robot is hackable with a UART port on the mainboard. Connect the GND, TX and RX to the EZ-B's UART TX and RX to control it from an EZ-B.