Make your robot a chatbot with personality and engagement. It will allow your robot to remember details and form emotional relationships with people.

How to add the Personality Forge robot skill

Follow the Getting Started Guide to build a robot and use the Personality Forge robot skill.

How to use the Personality Forge robot skill

Make your robot a chatbot with personality and engagement. It will allow your robot to remember details and form emotional relationships with people. The Personality Forge chatbot platform's AI Engine integrates memories, emotions, knowledge of hundreds of thousands of words, sentence structure, unmatched pattern-matching capabilities, and a scripting language called AIScript. It's the heart and mind of all the chatbots here, and it's easy enough to work with that you need no programming experience to get started.

1) User input window for manually typing messages to send to the bot. In most cases, you'll want to use ControlCommand instead of manually entering. But you can manually enter for testing purposes. 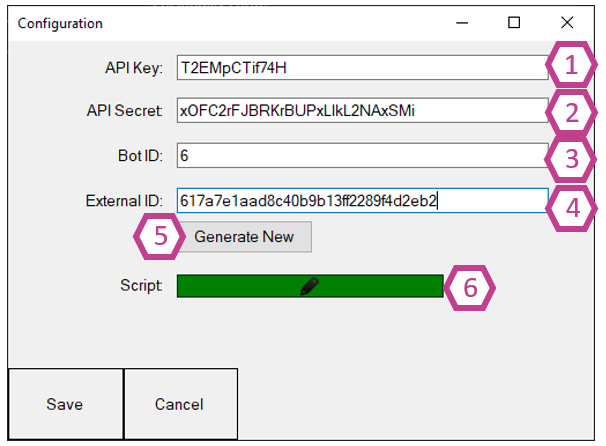 4) The external ID represents the conversation memory. Long as this ID is the same, the memory for the conversation will be maintained forever. If you press the Generate New button, a new ID will be generated, and therefore the chatbot will have to relearn everything.

6) The script that will execute for every response. By default, a script will speak the chatbot response out of the PC speaker. You can modify this code to speak out of an EZB speaker or process the response in more detail to execute Auto Position actions, etc. 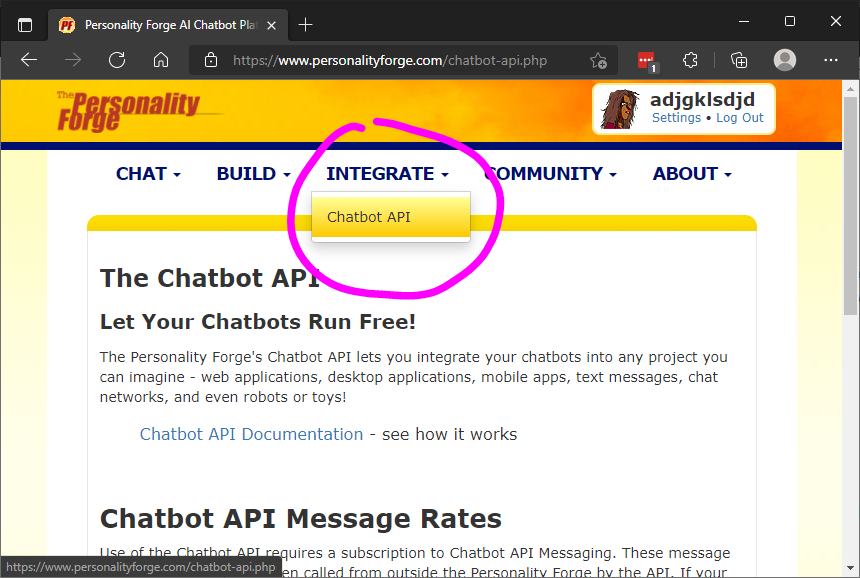 4) Scroll down and press "Get Started Now." 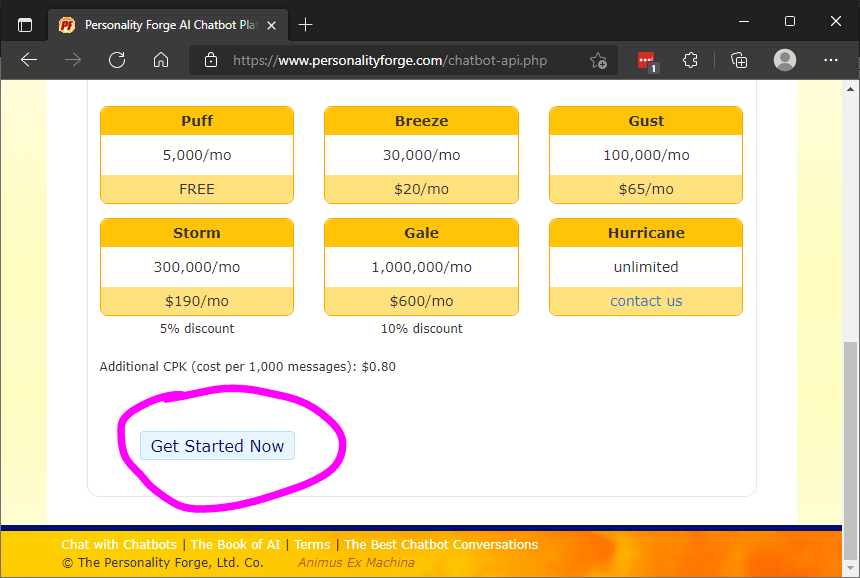 5) Choose the account type based on the number of messages you send per month. The free version (Puff) has a limit. You do not need to check Enable Simple API or fill Allowed sites, as we will not be using those two options. 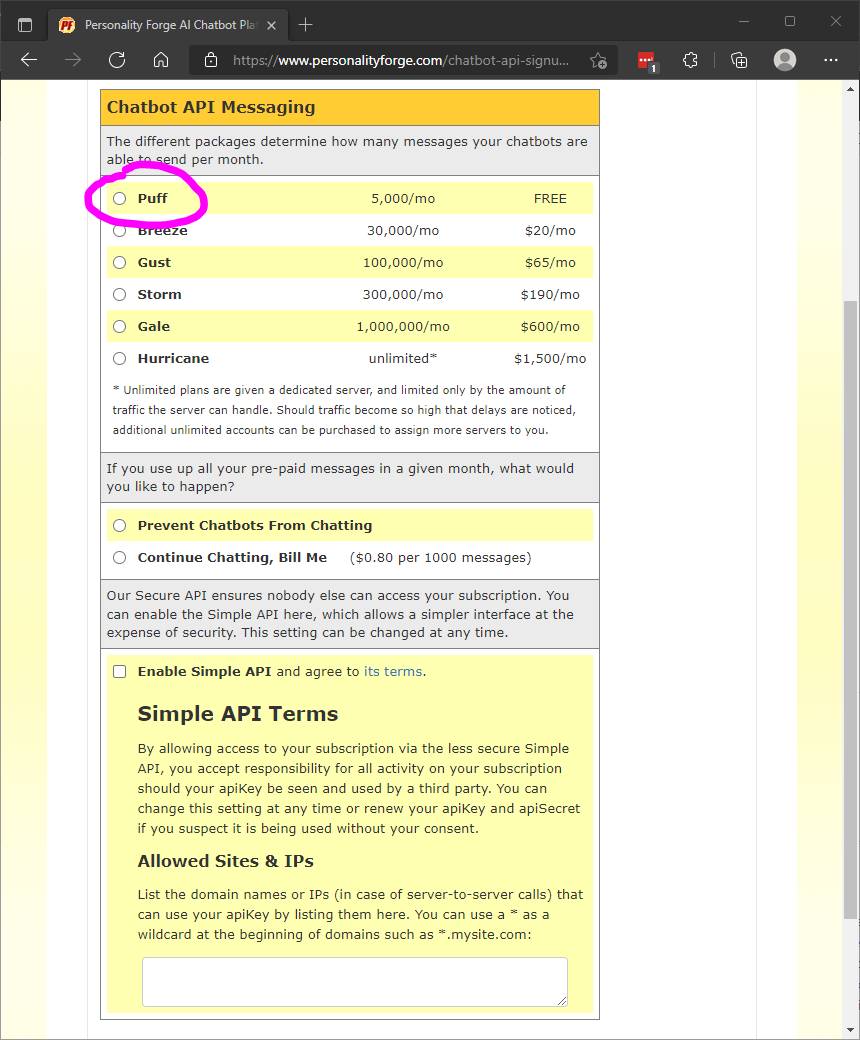 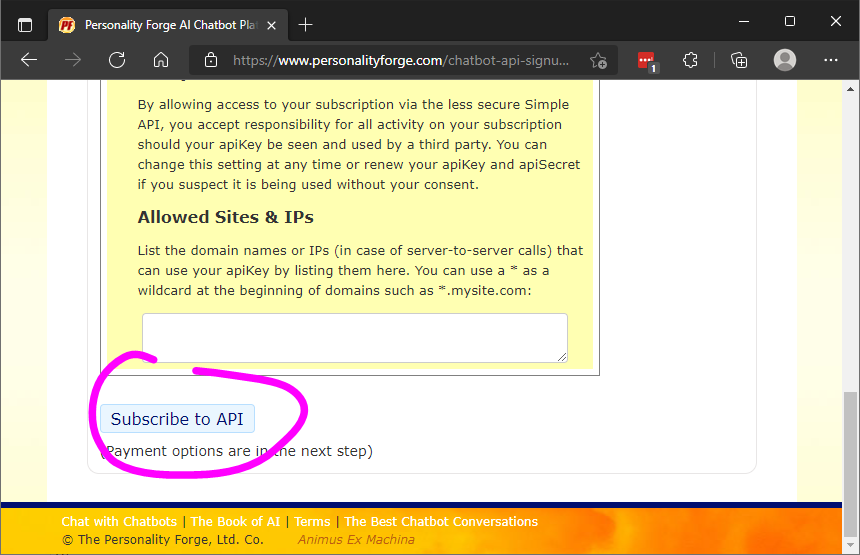 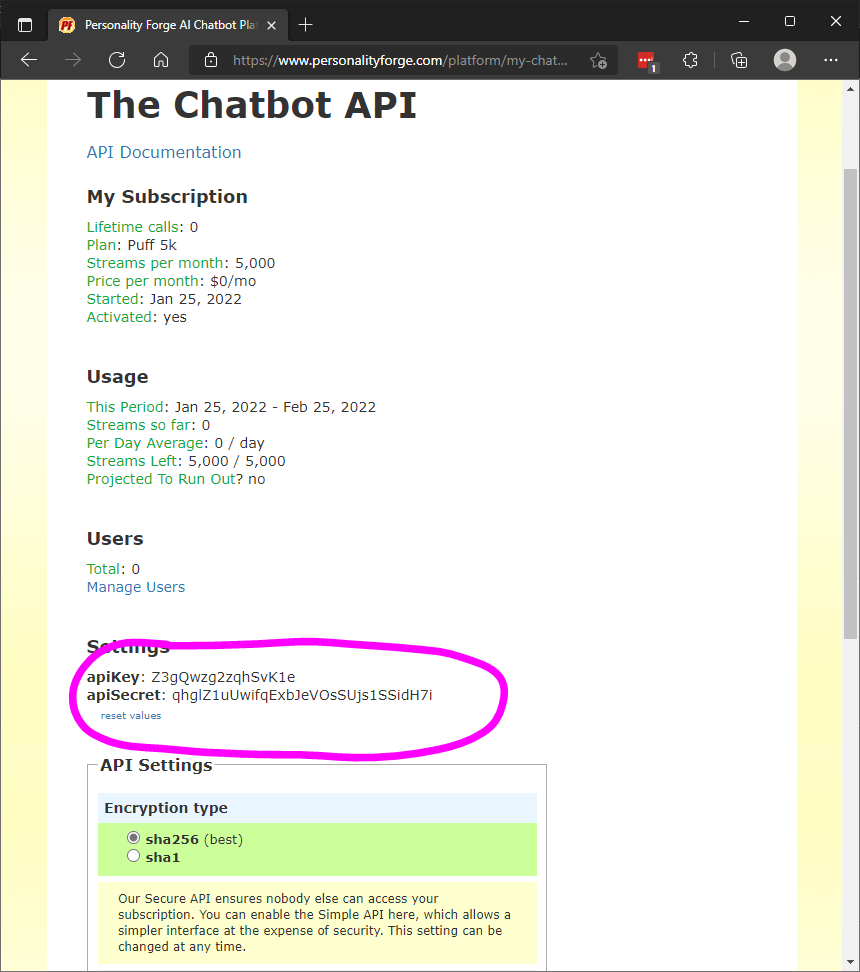 This manual doesn't cover the specific details of building a chatbot on the Personality Forge website. They have manuals and information about doing so. However, to get you started, press the BUILD -> Chatbot Workshop menu option to begin creating a chatbot. 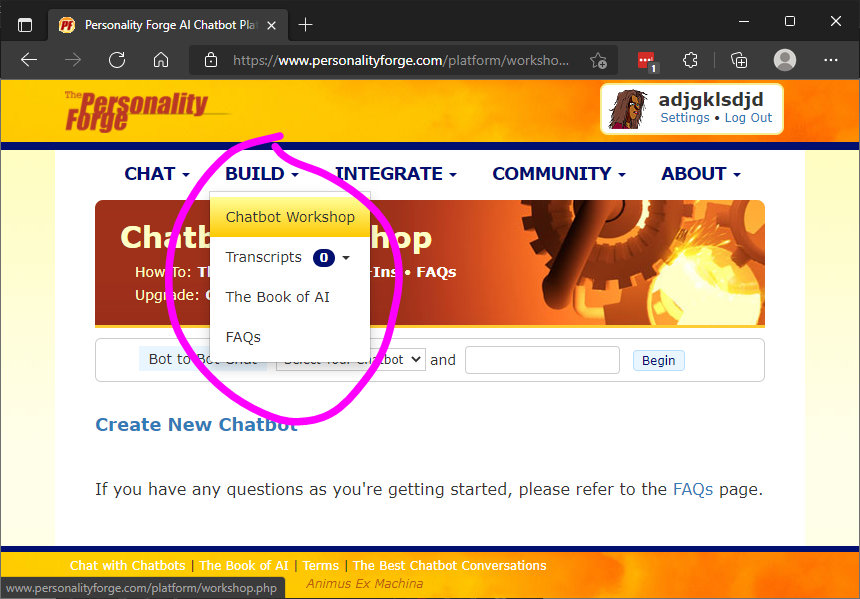 There are a few variables created for every bot response from the server. You can read more about the Emotion and Data variable types on the Personality Forge website.

- "$PersonalityForgeData" (array) contains the custom data that can be assigned per response when building a bot. Read more about this on the Personality Forge website.

- "$PersonalityForgeRequest" (string) is the message sent to the chatbot in the conversation.

- "$PersonalityForgeResponse" (string) is the response from the server.

- "$PersonalityForgeEmotion" (string) is the emotional value of how the chatbot feels about the current conversation.

Example: ControlCommand("Personality Forge", "send", "Hello, how are you?"); 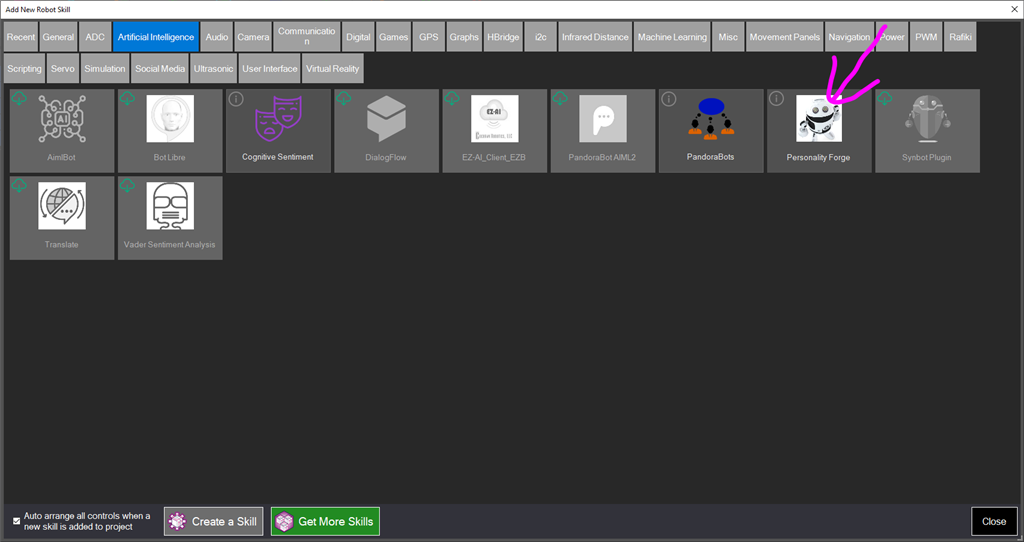 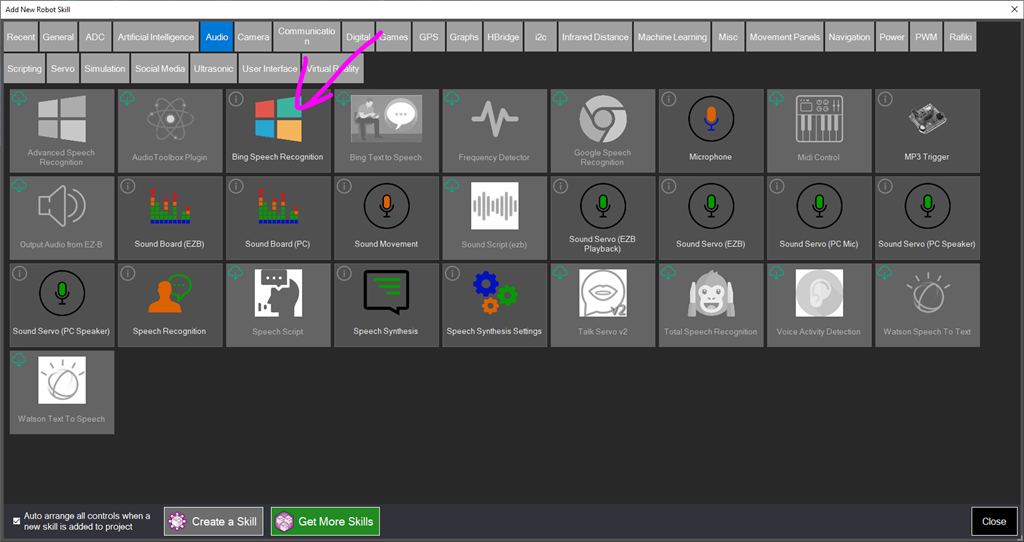 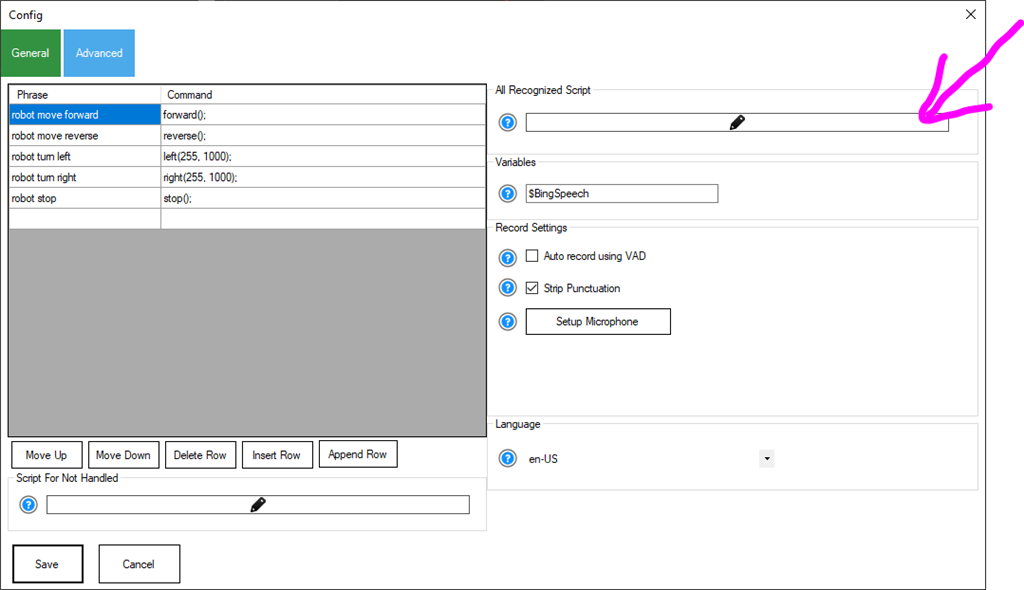 6) We'll add some code to take the Bing Speech recognition response variable and send it to the Personality Forge. Add this code to that All Recognized Script

Press the Start Recording button on the Bing Speech Recognition control, speak, then press Stop Recording. Now you can have a conversation with the robot

By Microsoft
Detect the percentage of the positive sentiment of the...

Perry_S
USA
#1   Jan 27
The state of the "so called" AI chatbots sure hasn't made any advancements in the last 10 years. They just throw the term"AI" in front of anything now to make it sound innovative. AI is more of a marketing term than a scientific one.
I tried this one out and it is pretty much on par with the original Pandorabots skill that Synthiam has offered forever.

me: what color is the sky
chatbot: the sky is blue
me: what did I just ask you
chatbot: what would you like to talk about

robo rad
Canada
#2   Jan 27
I think I mentioned once before, I had 2 chat bots talk to each other for about 30 minutes. The results were too Funny!

All the chatbot ai I find is NLP (natural language processing). The difference with NLP is a conversation to achieve a predefined goal. So it’s more like a funnel that narrows the discussion to understand what the user wants the do. But that's not what we want. We want the robot to have a personality and feel alive.

The difference between robots and chatbots is that we want them to seem alive with a personality. That’s where we’re lacking in technology. No one seems to be focusing on that, except things like this.

In the landscape of these chatbots, they all seem to be on the same plane.

Perry_S
USA
#4   Jan 28
I hear you DJ and you have been very good at implementing these services. On their site you can select to chat with their most advanced chatbot as they call it. After all it has over 106,000 AI's, whatever that means.
The responses it gives are as I pointed out above. Same as Pandorabots AIML 1.0.

They do have an option to watch 2 chatbots talk to each other though.

My AIML changes responses only when I edit the xml files or add a xml file, as you probably are aware of.

As DJ put it, "We want the robot to have a personality and feel alive." this will never happen, it's not alive.

My Alexa tells me to have a good day, but does she really care if I do, I don't think so lol