This skill views the known script variables and their respective values. Variable Watch automatically refreshes to show variable values. This is a great skill for debugging your programs and viewing the variable data.

*Note: It is advised to run the Smart Variable Watcher robot skill instead of this. This skill may cause performance challenges with your program. Only use this skill for debugging purposes. 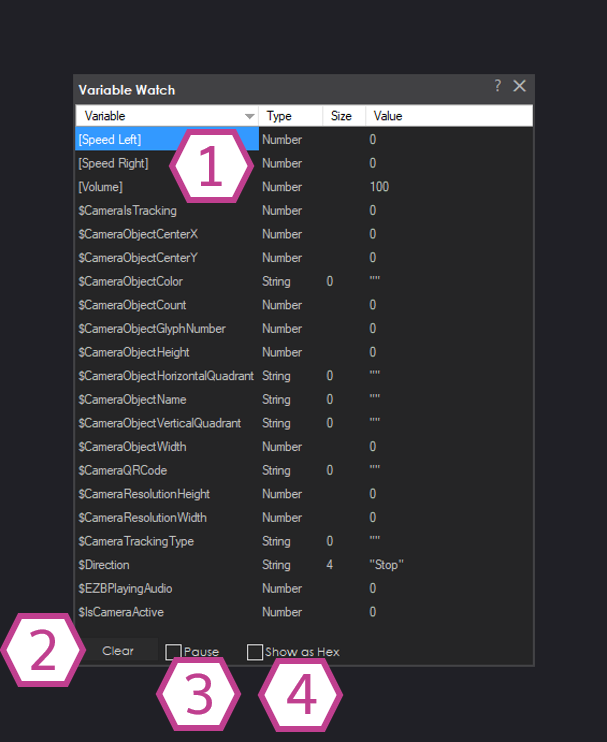 1. Variable Display
This area displays the variable name, its type, its string size (character count), and its value.

2. Clear Button
This button will clear out all the variables until only the default variables are left.

3. Pause Checkbox
This checkbox will pause the variable value updates.

4. Show as Hex Checkbox
This checkbox will show the variable values in Hex.

How to use Variable Watch

1) Add the skills that you would like to use in your ARC project. These skills will automatically create the variables associated with them.

2) Add the Variable Watch skill﻿ to your ARC project (Project -> Add Skill -> Scripting -> Variable Watch).﻿ *Note: You have to add this skill after you add other skills because only existing variables will be populated into the variable watch list.

3) Continue to use your ARC project and view the variable values and state changes in the Variable Watch skill.

By Synthiam
This skill gives you the ability to use movement actions to... 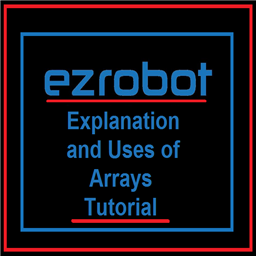 Explanation And Uses Of Arrays.

This Tutorial will explain what an "Array" is, and give you some examples of how they are, or can be used within...
Login to post a comment