How to add the Script Monitor robot skill

Follow the Getting Started Guide to build a robot and use the Script Monitor robot skill.

How to use the Script Monitor robot skill

This is a diagnosing tool to identify scripts that are running. Many skills have script events that are triggered based on activity. For example, a Wii Skill will execute a script when a button is pressed. Because these scripts are executed in the background, this skill lets you monitor the activity.

If your script has a loop, it may run extra long. Using this monitor; you can see which scripts continue to run. 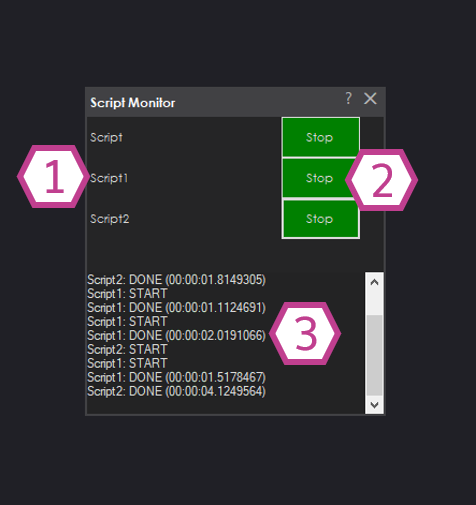 1. Script Labels
These labels are the titles of each script skill you have included in your ARC project.

2. Stop Buttons
These buttons allow you to stop scripts that are running easily.

3. Status Display
Displays the status of scripts being run and stopped.

How to use Script Monitor

3) Edit, run your script, and then move over to the Script monitor, where you can stop the script at any time.