This tutorial will provide technical information about servo motors and how they work. We made it easy to get a robot up and running. However, there are many fun and exciting things to learn about how the robot works. The more you know, the more you can get your robot to do it!

ARC supports all servos, including the ability to define your servo driver using the Servo Script Robot Skill. The most common types of servos are...

*Note: You will find servo driver robot skills in the Servo Robot Skill Category. These skills are also listed at the bottom of this document.

ARC displays a standard configuration dialog for configuring servos across all robot skills. This manual will explain how to configure a servo (even multiple servos) to be moved from a robot skill. In this example, we will use a vertical servo robot skill, although this procedure applies to any robot skill that uses servos. Many robot skills use servos, including WiiMote, MYO, Camera, and dozens more...

The standard servo interface menu is the same across all robot skills that use servos. This menu will be displayed when selecting a servo in a robot skill's configuration. You can choose the port, EZB Index, the MIN position value, and the MAX position value of each servo. You may also select the checkbox to invert the direction. 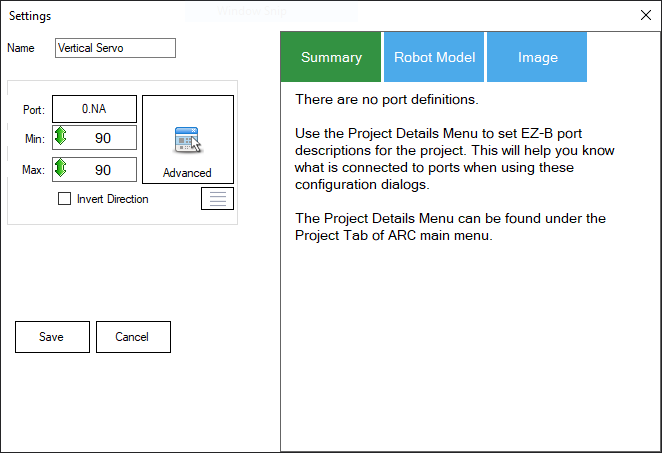 This new menu will display when the advanced button is pressed on the standard interface menu. This advanced menu allows specifying additional options and adding multiple servos. The advanced interface is also used when configuring acceleration, velocity, or speed of servos that support those properties. 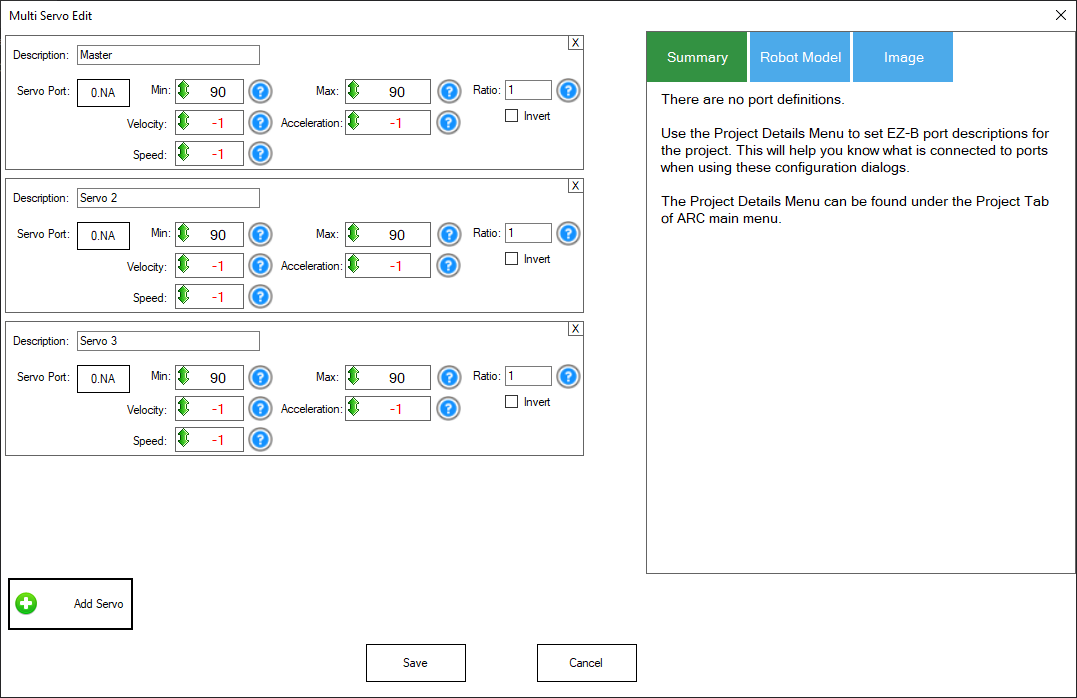 *Note: Hover your mouse cursor over the blue question marks to read about advanced options. Many advanced options require hardware support to work. So, by default, they are set to -1, which means ignore.

There are many robot skills control servos, such as the Camera Device, WiiMote, Joystick, and scripting, to name a few. There are a few of the most popular servo skills used by robot builders to get started.

Great for testing and moving your first servo! These robot skills are excellent for testing your robot's movement range and ensuring the servos work. We always recommend using these robot skills when building your robot to ensure everything works correctly. At the same time, the two versions of this skill differ in how the user interface is presented by dragging vertically or horizontally. This does not have to matter based on the orientation of your servo in the robot itself. These two skills can be used for testing as it is a matter of preference.

One of the most powerful and popular robot skills demonstrating ARC's power is the Camera Device. This robot skill will use either the EZB remote camera (if supported) or a USB webcam mounted on the robot. By configuring options, you can have the camera track objects, faces, and colors and even detect emotion or age with additional robot skills. The Camera Device has settings in the options menu for controlling servos when a camera is mounted on a gimbal. This feature allows the robot's camera to move and track the object.

Create servo animations to have your robot wave, dance, or pick up and move objects. The Auto Position skill transforms a group of servos into custom positions (Frames) to create animations. You can combine the frames into actions for your robot's animation. This is done with "Inverse Kinematics" or "Motion Planning."

This is a popular robot skill for humanoid robots, such as the InMoov, Robotis Bioloid, or EZ-Robot JD/Six. For robots with many servos used in arms or legs, this allows creating animations that can be executed programmatically by other robot skills using the ControlCommand(). This means your robot can perform actions based on speech recognition or chatbot conversations.

Auto Position for only servos

There are two types of joystick robot skills based on the type of joystick used. The most common type is the XInput version, which supports the latest joysticks, including Xbox controllers. The xInput has additional support for analog trigger buttons and multiple independent joysticks. These robot skills can control servos, allow scripts to be assigned to buttons, and optionally control the current movement panel to move the robot.

Being able to control your robot servos with your hands and move the robot's camera with your head is a fantastic experience. A few robot skills support a variety of VR headsets, including the Meta Oculus Quest and Steam VR (i.e., HTC Vive, Windows Mixed Reality, etc.). The hand tracking feature is one of the great features of using the Meta Oculus Quest robot skill. This feature lets you move servos without needing to hold the controllers in your hands. You can map your fingers to individual servos, which is excellent for humanoid projects like the InMoov.

You can set global servo positions across all robot skills with the appropriate Javascript, EZScript or Python commands.

The robot skill settings for servos are for the individual robot skill only. Every robot skill has servo values (i.e., min and max). This means the Camera skill has different servo values than the Joystick skill. The values specified in a skill's configuration are specific to that skill.

There are commands for all languages (JavaScript, Python, EZ-Script, etc.) for specifying limits. For example, the EZ-Script command in an INIT script to specify servo positions globally across the entire application is...

SetServoMin (servoPort, position)
Set the minimum limit that this servo can ever move to
Servo position is between 1 and 180
Example: SetServoMin(D14, 40)

SetServoMax (servoPort, position)
Set the maximum limit that this servo can ever move to
Servo position is between 1 and 180
Example: SetServoMax(D14, 100)

Here's an example from the EZ-Robot JD project that makes the left gripper not move further in either direction globally across the ARC software. Use the JavaScript, Python, or EZ-Script manual for the appropriate commands for setting global servo position values.

Because ARC uses a standard dialog for configuring servos, the following steps will demonstrate how to use it. Any robot skill supporting moving servos will display the same "servo selection" dialog as this example. In this example, we will use a standard PWM hobby servo connected to one of the EZB digital ports.

Load ARC and connect to an EZB. Add a servo to the D0 port of the EZB. 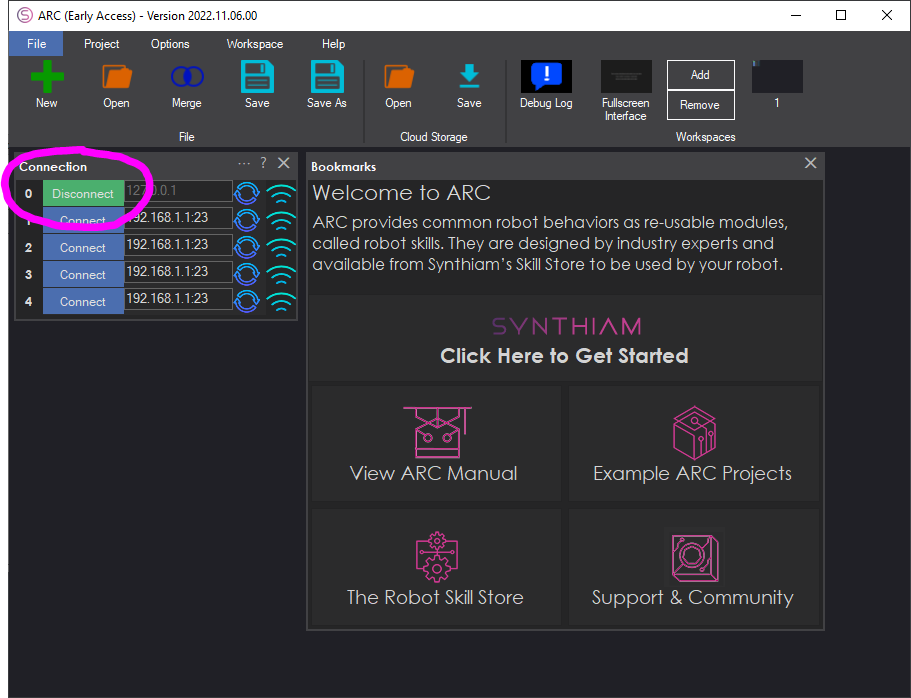 *Note: Ensure you have the latest ARC. When you load ARC with an internet connection, it will notify you if a newer is available. 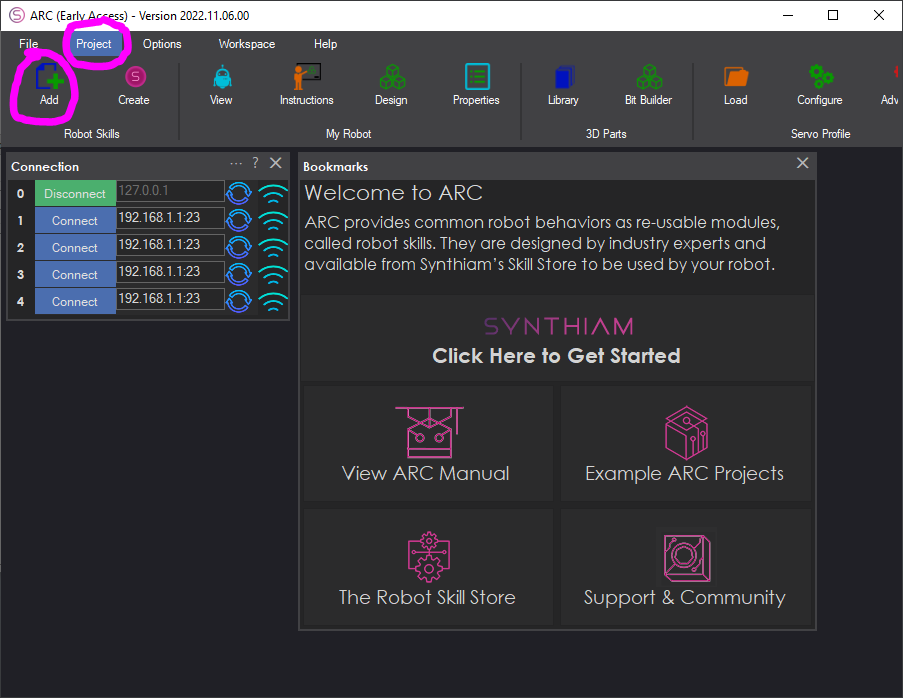 The Add Control window will display. This window allows you to browse and select controls to add to your project. Press the SERVO tab to view servo-specific robot skills. 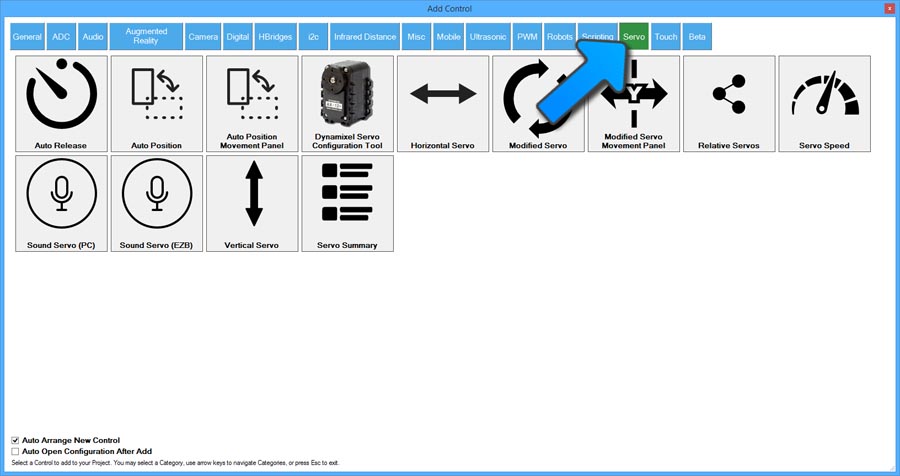 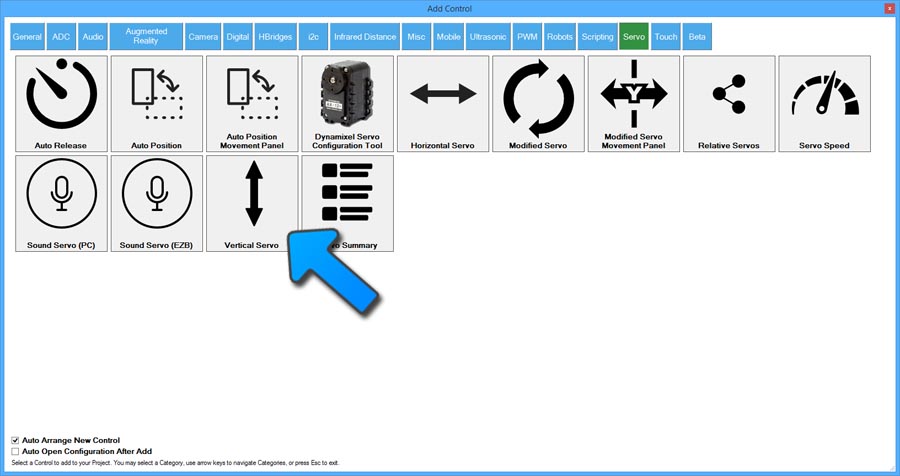 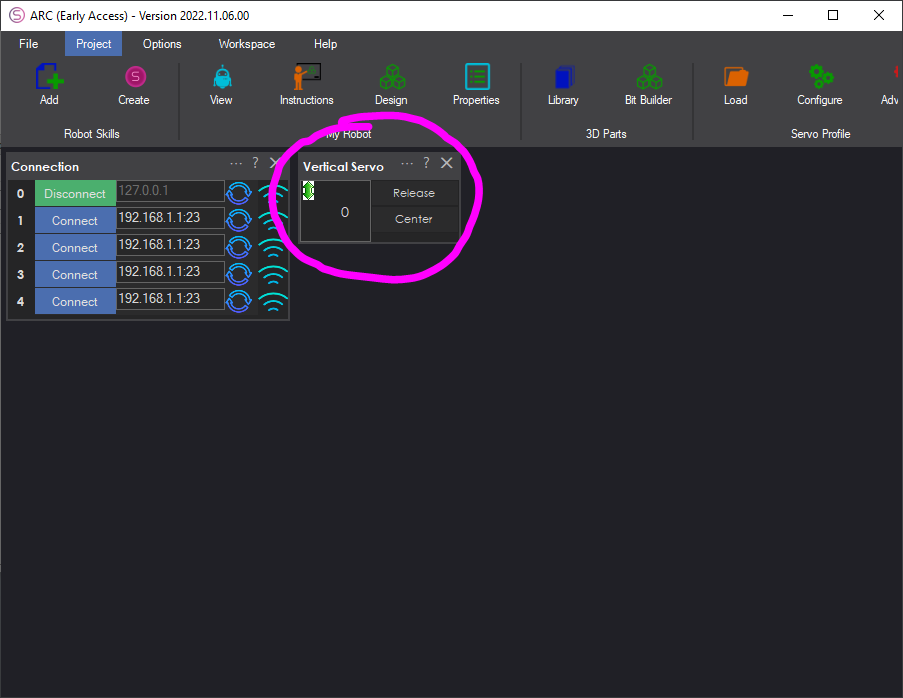 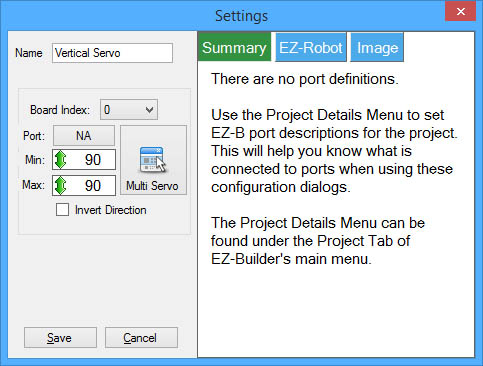 Name: This is the name of the control.
Board Index: ARC can connect 5 EZ-Bs to the ARC Software. This specifies which EZ-B to send the servo command to.
Port: The EZ-B port of the servo. Pressing this button will display the EZ-B to select the respective port.
Min/Max: Min and Max limits in degrees of the servo. The servo can move between 1 and 180 degrees. The value for Min must be less than the value of Max in all cases, even when Invert is checked.
Invert: If the servo is moving in the wrong direction, checking this box will reverse/invert the direction of the servo.
Multi Servo: If more than one servo moves, you can specify multiple servos. 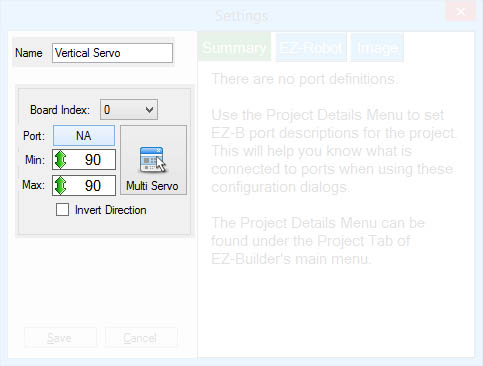 Press the PORT button, and ARC will display the EZ-B port configuration. You may select the port and press the Close button in this dialog. 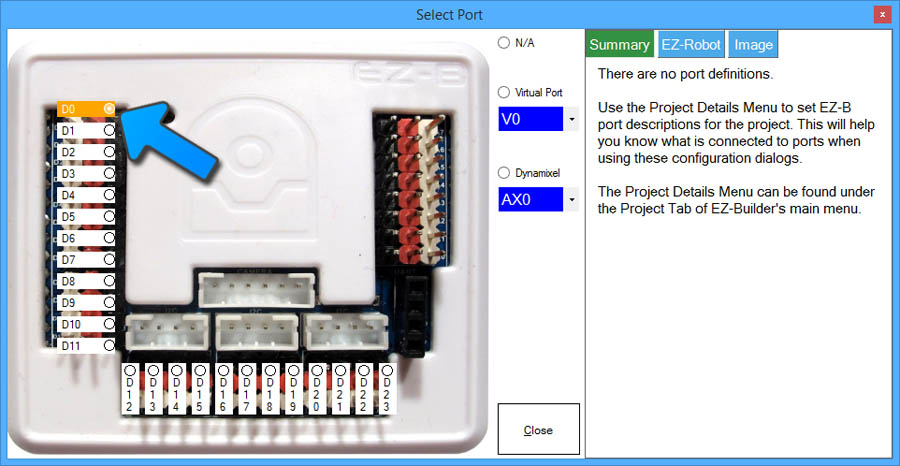 Now that you have selected a port, we can move the servo to specify the MIN and MAX limits. These numbers are in degrees between 1 and 180. Start with the MIN by pressing the mouse button while dragging the cursor UP or DOWN. The MIN value must be less than the MAX value. In this example, set the MIN to a low number, and the servo will move in real time if connected to ARC and an EZ-B. 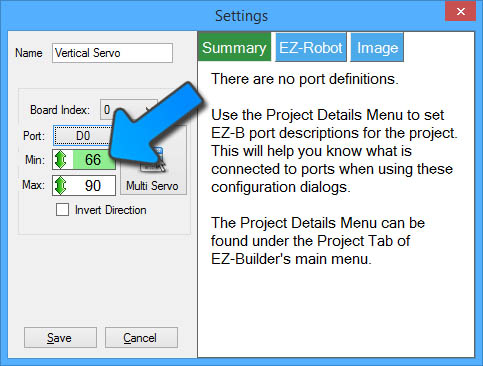 Move the MAX by pressing the mouse button while dragging the cursor UP or DOWN. The MIN value must be less than the MAX value. In this example, set the MAX to a low number, and the servo will move in real time if connected to ARC and an EZ-B. 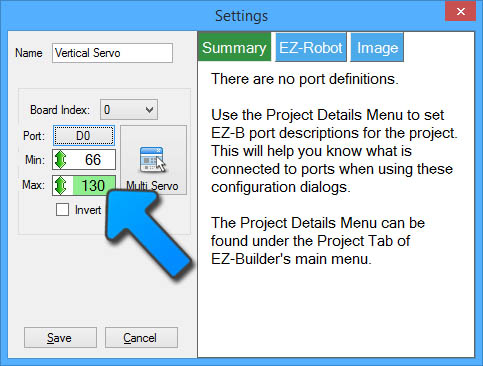 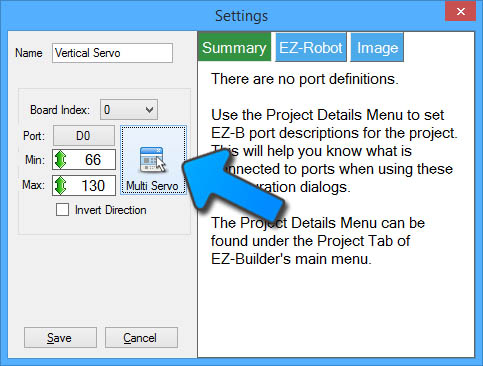 To add multiple servos, press the ADD SERVO button. Each time the button is pressed, a new servo entry is added. You can remove the servo by pressing the X on the respective servo. Use the PORT, MIN, and MAX to configure the limits. The multi-servo option also allows a ratio to be specified. The ratio is based on the primary value for the first servo in the list. If the servo degree position for the first servo is defined as ten and the ratio is 2, the respective servo will move to degree position 20. 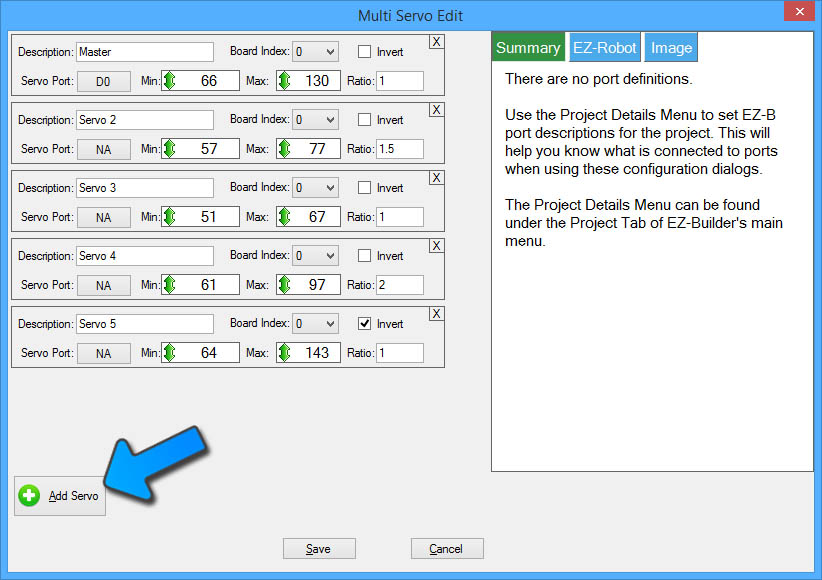 Close the configuration dialog for the servo control and return to the workspace. Now that the servo has been configured, you may move it between your specified MIN and MAX limits. Click in the servo position, and the cursor will change while holding the mouse button. Slide the mouse up and down (for vertical control) to move the servo between the specified limits. 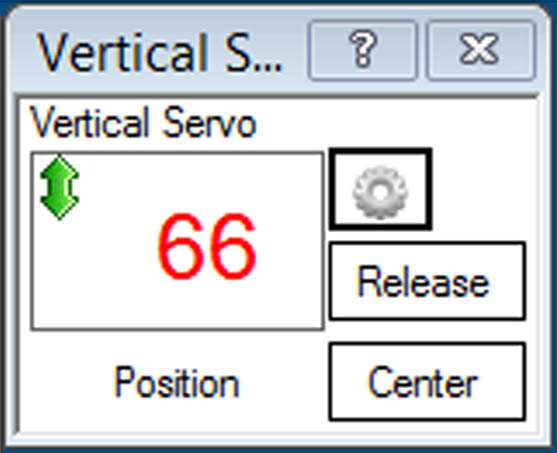 *Note: Even though many controls may move servos, the configuration of those servos is only valid for that control. If you configure a camera control to move servos to specific min/max ranges, those ranges only apply to the camera control. Every control has its own range and settings for versatility.

Unlike a Standard Servo, a continuous servo has its internals changed to allow continuous 360 rotation. The two parts that are removed from a standard servo to create a continuous rotation servo are:...

Adding this control to your project will connect to an SSC-32 servo controller. The connection can be direct via pc com port. Or through an ezb supporting the Hardware Uart or Software Uart...