The User Interface Builder allows you to create interface pages for the Arc that are displayed in the fullscreen interface.

User Interfaces may also be used on the Arc mobile app (with limited functionality). Without creating an interface for mobile use , the default Desktop is displayed to users - which may be confusing by viewing all the skill controls.

Designing an user interface is very easy, and you can create as many as you like. The user can be presented with navigation buttons to switch between user interfaces in both the fullscreen interface view and mobile app.

The most common use of the interface builder is designing full-screen user interfaces (aka remote control view) in ARC for users to control a robot. However, if you plan to use the user interface on mobile devices, it is important to know that not all of the ARC robot skill controls are supported on mobile. 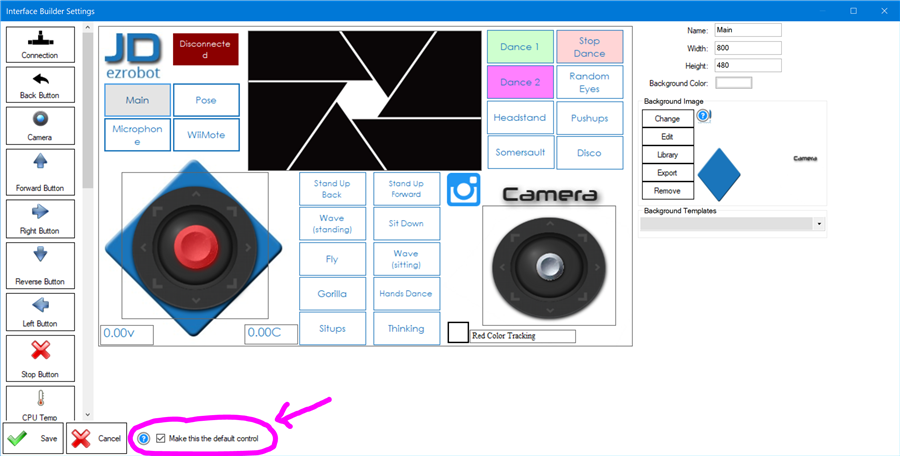 To view the fullscreen user interface, select the last virtual desktop in ARC. 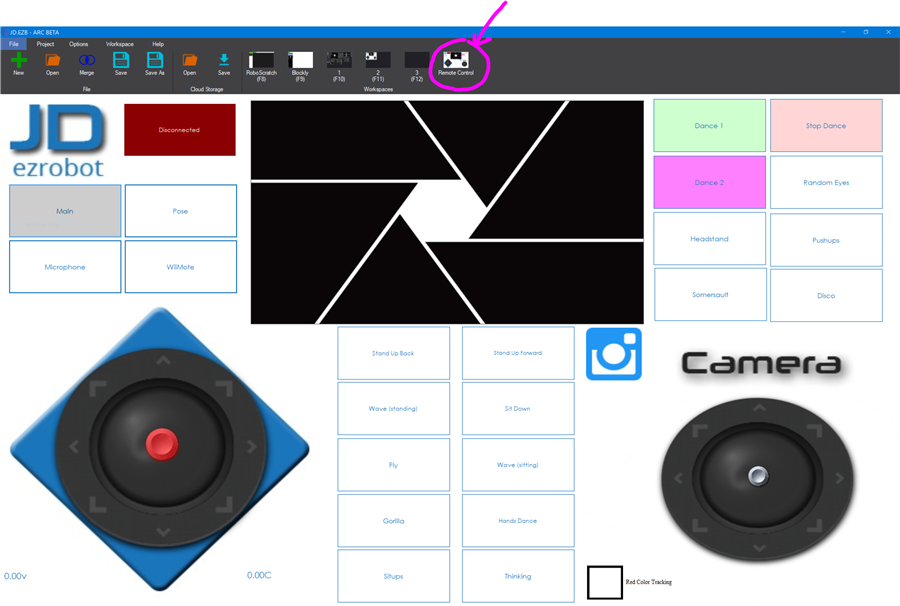 When a project loads, the fullscreen interface can be displayed rather than the default robot skills view. View the Project Details menu option and select Auto Focus the Default Control When Loading option. 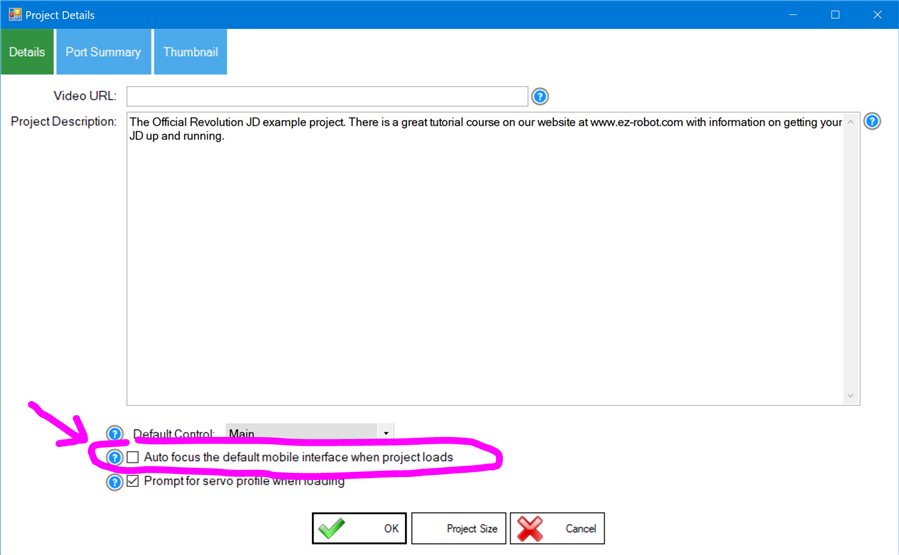 The ShowControl() script command will push the new specified user interface on top of the stack. That means you can navigate to the previous user interface with CloseControl().

Locate available ShowControl() commands by viewing the Cheat Sheet when editing the script for an event, such as a button press. 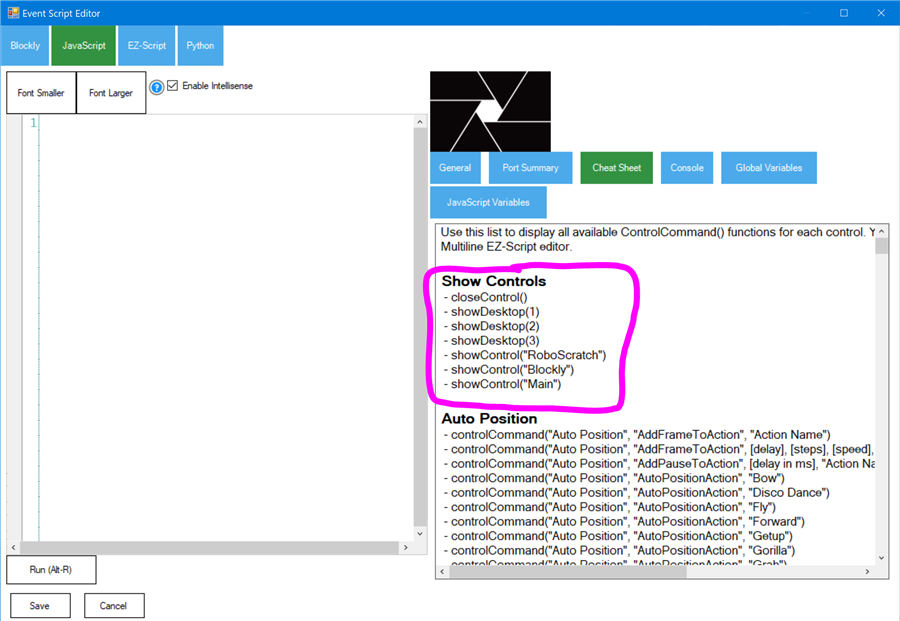 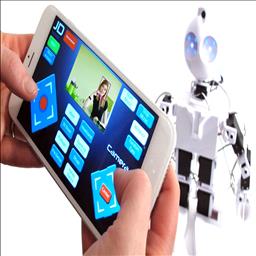 So, you've built your ez-robot and now you would like to make your own mobile app. Did you know EZ-Robot has a robot...
question

Is it possible for EZB-mobile have support for USB connection?  My robot has an embedded pc with USB connection at the moment, but I would rather use...
question 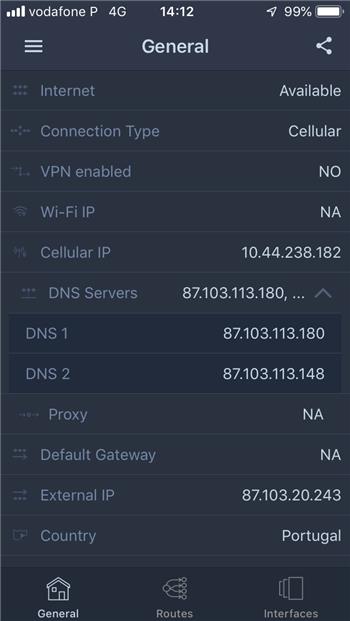 Can We Use The EZ-Builder Mobile App Outside Our Home...

Hi, I am trying to use the EZ-Builder mobile app to control my EZ-B v4 using  4G network on my android phone using port...
question

Hi all, I've been using EZ Builder for years now and can write scripts well enough to get me by. However I've never built or used the mobile...
question

Synthiam Code Object Dropping Square Brackets With An I Inside?

The Synthiam code object is interpreting square brackets [ i ] with an i inside as something else if you don't have any spaces. If you include the...
question

ARC On Startup, Workspace Not Setting Up Right

More of an observation than a question maybe? but  can we get rid of the "Tip&Tricks" window that pops up everytime I open up ARC? I cant seem to turn...

onedayflie2
Netherlands
#1   Jun 9 — Edited Jun 9
I try to add more than 1 button... but that seems not to work...
If i copy the button and paste it... I tried to adjust the settings... But the setings will change to the same for every button...

#2   Jun 9
I tested the interface builder this morning and it works.

The buttons do appear on top of each other at the top left starting position, have you dragged them away from each other? Could this be where your trouble is?

The settings do change and are saved when selecting each button individually. If you are still having trouble please reply with some screenshots.

#3   Jun 9 — Edited Jun 9
OneDayFlie2 - it seems you wrote this message while using an outdated installation of ARC. In the future, please upgrade before posting - thanks! (And no double posting