Use Virtual Reality with your robot to see what the robot sees, and control servos by moving your head. This plugin supports all virtual reality headsets through Steam VR (OpenVR), Google Play and iOS, including Google Cardboard, Oculus, Windows Mixed Reality and HTC Vive. The plugin does two things, it allows you to see what the robot sees and control the servos with the Pitch and Yaw of the headset. This means when you move your head, the robot head can move as well, mimicking your movement.

In this video, it was a test of the plugin on a Synthiam JD Humanoid. Sadly, he had no arms during the test so it's a bit funny to see. Professor E from The Robot Program was controlling the robot's head and viewing the robot's camera through the VR headset. In this example, we were using OpenVR in STEAM with a Samsung Odyssey headset.


In this video below, we were controlling an Synthiam Six Hexapod with a joystick and the VR headset. When we moved the head left to right, the legs of the hexapod will rotate the body so we can look around. This also applied to looking up and down, the legs would tilt the body so we can look up and down as well. In this example we were using an Android phone with Google Cardboard Glasses.


Here is another interesting example where we combined this VR Headset plugin with 2 WiiMotes to create custom animations. Each time a button was pressed on the WiiMote, a new FRAME was created with the current position of all servos and appended to an ACTION. DJ keeps pressing the button and the FRAMES keep getting appended to the ACTION until he stops. One he presses the trigger on the WiiMote, the code instructs the ACTION to be played back. And thus, all FRAMES are played back because they are part of the action.


Here is a screenshot of the plugin running on an ARC workspace with a camera. 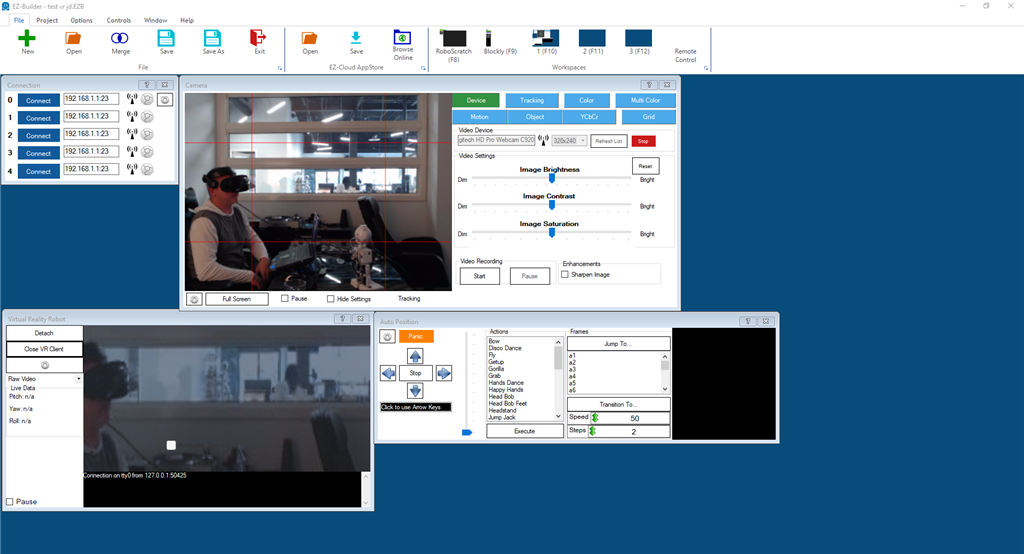 What Hardware Does It Support?
There are two methods that connect to the plugin which open a wide variety of hardware.

1. SteamVR (OpenVR)
On PC, the supported headsets use Steam VR (OpenVR). This means any headset supporting Steam VR will work with this plugin, given the headset is directly connected to the PC. The most popular SteamVR headsets are Oculus, HTC Vive and Windows Mixed Reality. 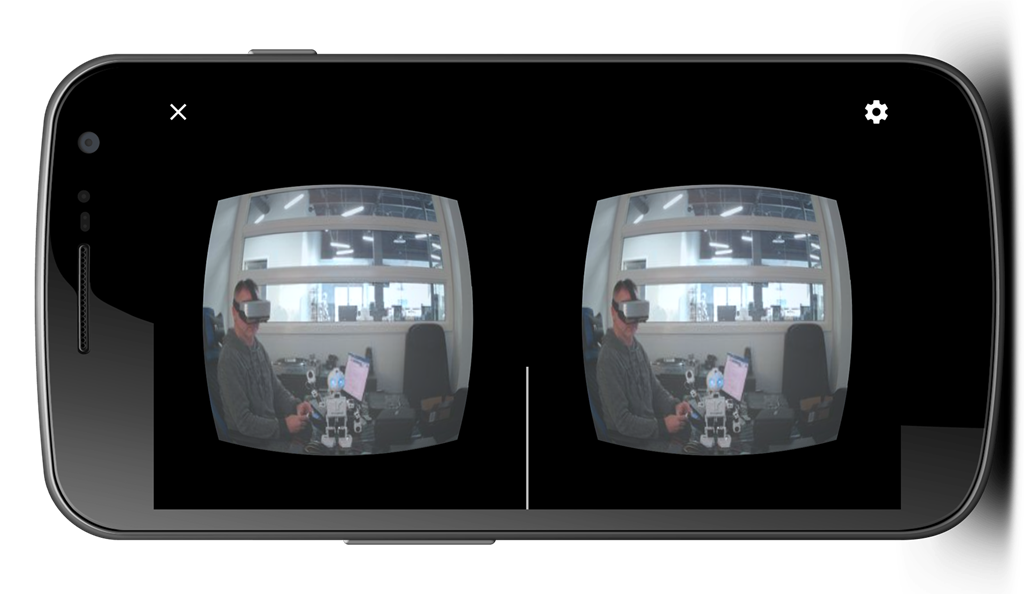 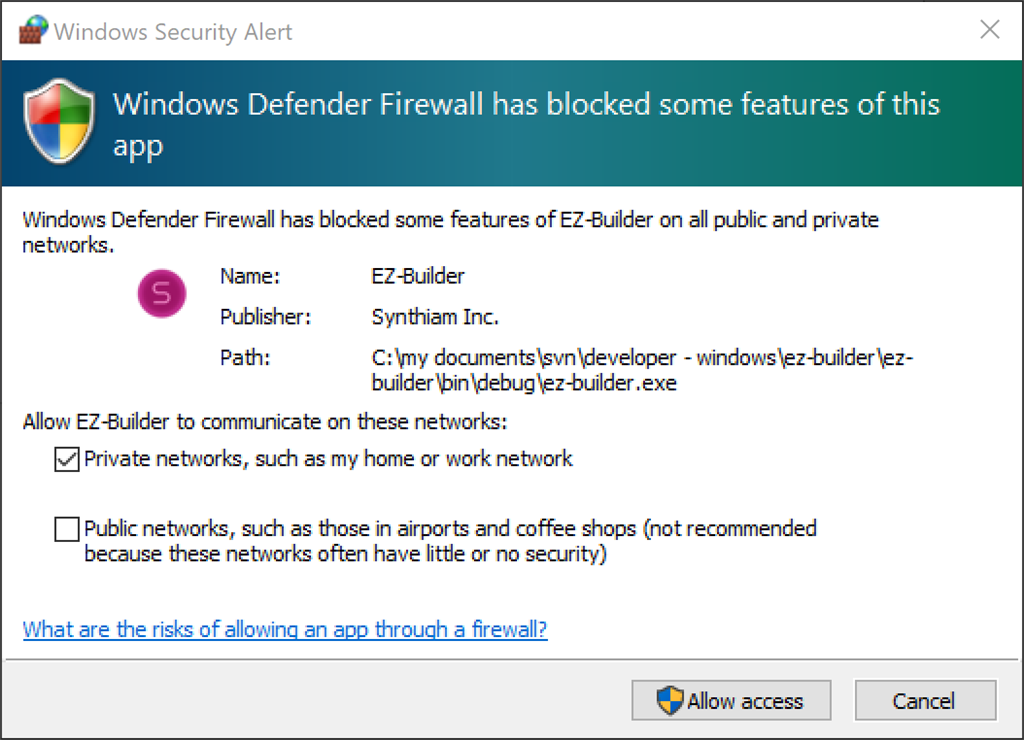 When the plugin is loaded, you may receive a message to allow firewall access. Be sure to check Private and Public networks. If you do not check both, you may end up in a situation in the future where you're connected to a public network and the plugin isn't working. In this case, it's because ARC doesn't have firewall permission. Also, if you do not see this message when the plugin loads, it could be because you've already answered this in the past. In which case, you should visit the firewall rules to see if ARC has correct access. 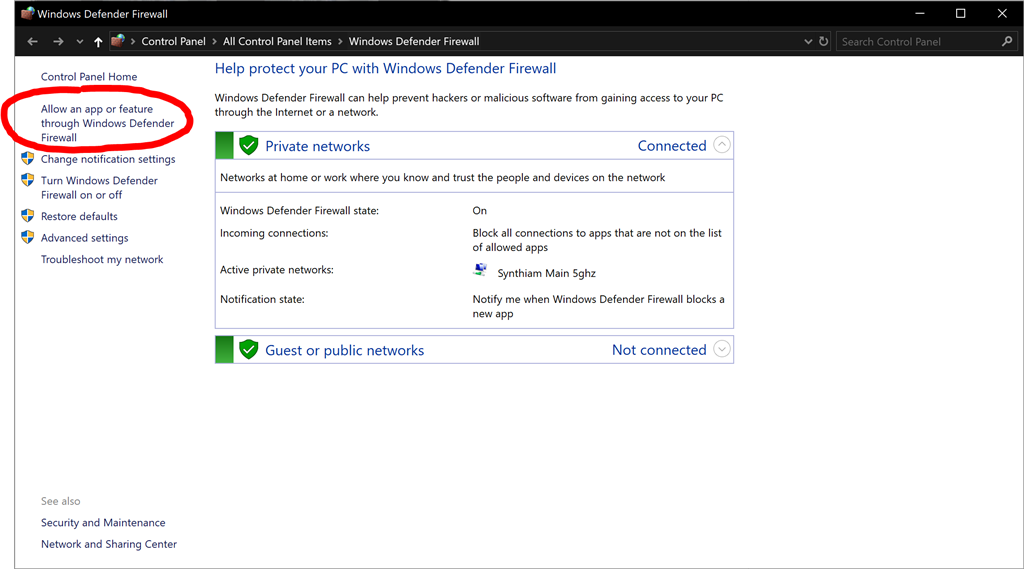 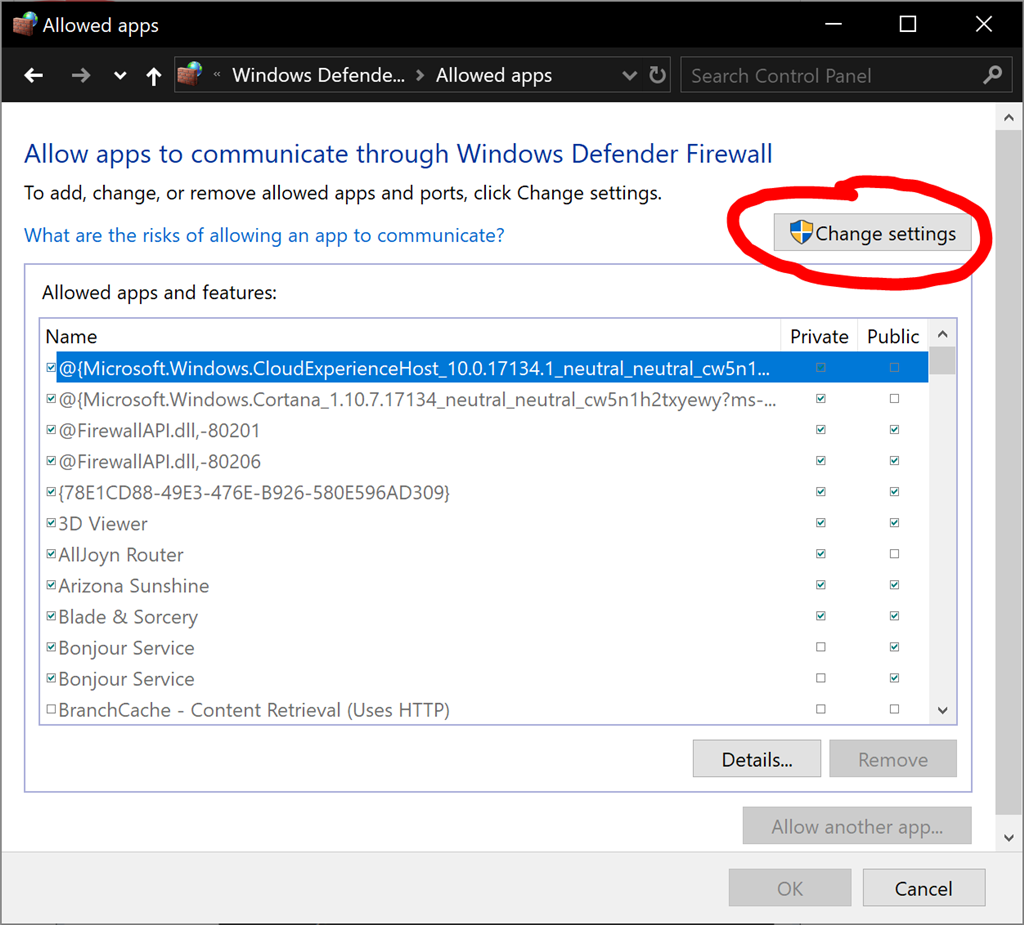 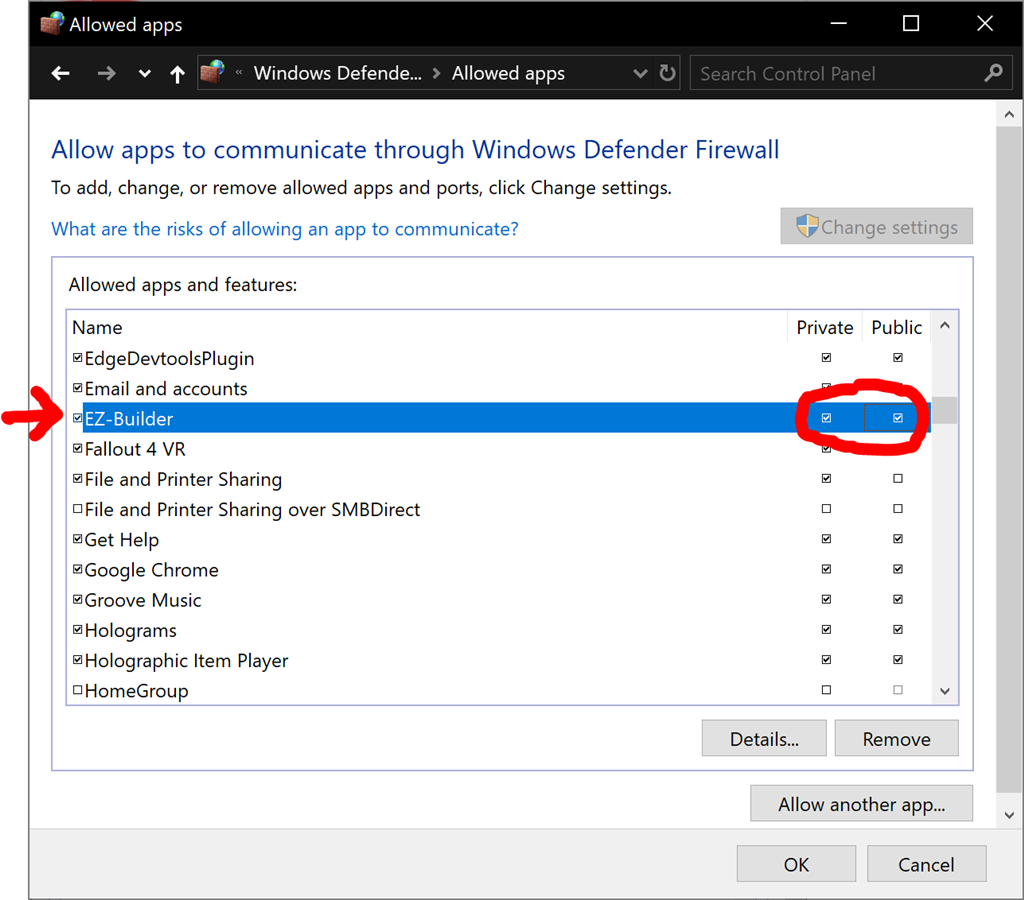 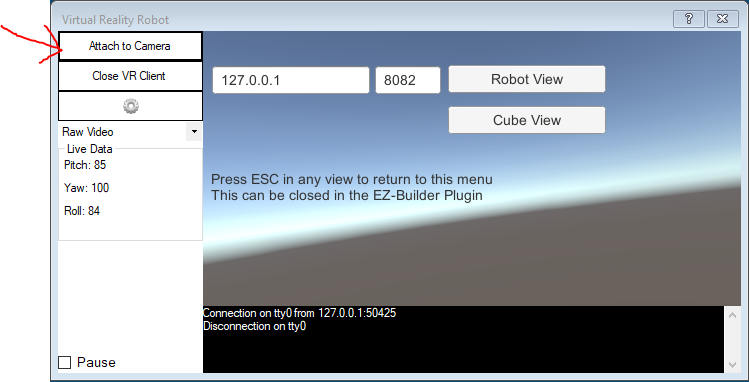 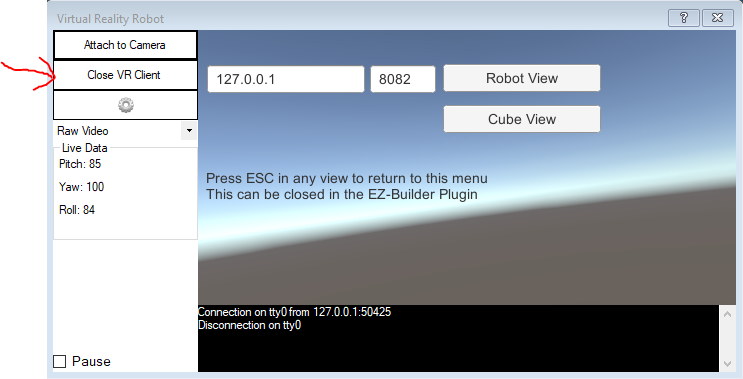 If you are have a Steam VR compatible headset connected to your PC, this button will allow you to use that headset. This button will start the VR client, which connects to the VR Headset. The client can be launched either full screen or in a window. By default, the setting is to launch in the plugin window. This setting can be altered for your project in the configuration dialog.

Google Cardboard Users
For those using a google cardboard (iOS or Android) compatible device and headset, your device needs to be on the same network as the ARC PC. This is because your mobile device will connect to the ARC plugin by typing in the IP address of the PC. The IP Address for your ARC PC is displayed in the plugin. Simply load the Virtual Reality Robot mobile app on your device and enter the ip address of the ARC PC. 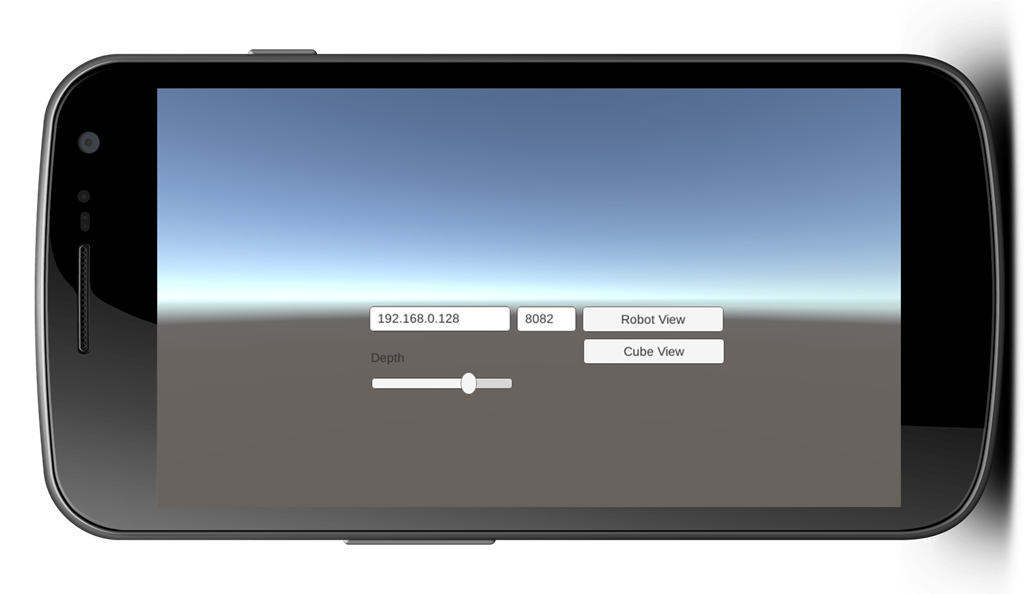 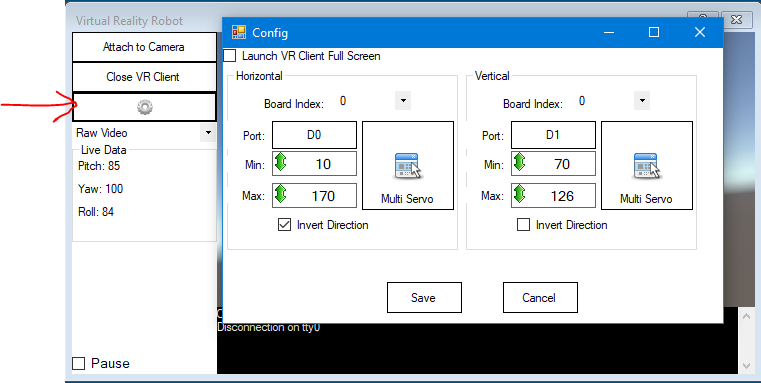 This allows you to select the servos that will be assigned to the Horizontal (yaw) and Vertical (pitch) of the headset which correspond to the robot. So when you move your head, the robot moves as well.


Virtual Reality Caution
Read the warnings on your device before using a virtual reality (VR) viewer with this plugin to reduce the risk of personal injury, discomfort or property damage. Ensure you use this plugin with adequate space to avoid hurting yourself or others by walking into something. Nausea and motion sickness may be experienced and worse for some users. Do not use this plugin for extended periods of time to avoid experiencing nausea. 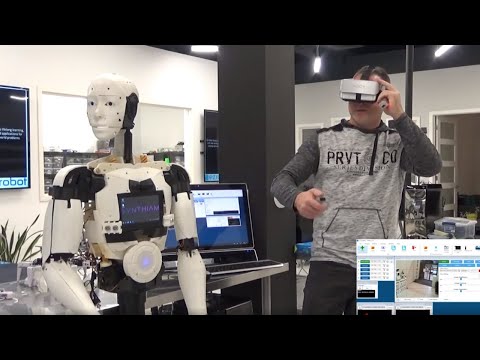 I'll be demonstrating how to control servos and see what the robot sees using a Microsoft Mixed Reality VR headset....
question

Has anyone had any experience with the virtual reality client causing their whole PC to crash? This happens randomly, it can be working fine for a few...
question 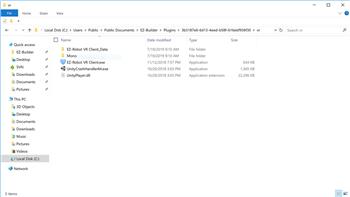 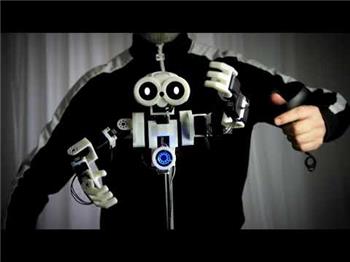 Hi,  ive successfully managed to get Virtual Reality running with my HTC Vive and the JD Camera, very nice :) Is anyone...
tutorial

How To Control Jd Robot Using The Valve Index

How would I go about controlling my Jd robot with my valve index using the controller's?
Show all 61 comments
Load More ...

#42   Jan 2019
Well two outta three problems solved. As things do..they all of a sudden start working with out doing anything to them.

Final item is still the dynamixels. Please watch this video. Also sorry for the lethargy ...days of prepping for CES...exhausted.

#43   Jan 2019 — Edited Jan 2019
Then set the servo ranges to match the head position. Move the positions until the vertical head angle is looking forward. You will have to experiment with the values, the software can't guess what they should be. Figure it out with experimentation...

#45   Jan 2019
I watched a documentary years ago about how our brains solve problems. They had these people play an arcade game for skiing. The people would play all day and have to keep beating their high score. Then, they’d get a full nights rest. The next day, on their first attempt, they all beat their previous high score.

It’s because our brain processes information of the previous day while we sleep - it’s a process similar to defragging a hard drive. But, it’s also solving problems and sorting the day’s information into knowledge.

2) when you’re feeling defeated, move to another task and revisit it the next day after a full night of rest

#46   Jan 2019 — Edited Jan 2019
We have 48 hours until we step on a plane to Vegas. I've managed to wear all the hats (as usual) and produced all the flyers, business cards, banners in photoshop, dismantle the robots, design, build and install a bluetooth speaker systems, cast new faces in silicone and build shipping containers, created a pitch deck, made a press kit, etc. And alot to do in the remaining time. (No investor can deny my sweat equity.)

The reality, I only had 12 hours to get this plugin to work with my robots. That's all the time available in my schedule. It was a last minute decision to try and demonstrate telepresence, something not planned for the event. If I had a week, to mess with it then maybe I could figure out the dynamixel issue. The reality is I just don't.

As of this morning we have 84 companies who have scheduled to see us. Hopefully none of them request a telepresence demonstration

Maybe we fake it til we make it

I hope to revisit soon!

#49   Feb 2019
Any news on the IOS port of the app? Sorry my entire family switched to apple years ago so we are locked into their eco system.  :-(  https://play.google.com/store/apps/details?id=com.ezrobot.virtualrealityrobot

EzAng
USA
#52   Dec 2019
is there an app for am iPhone to use the  EZ-Robot Virtual Reality Viewer? I don't have a Android

EzAng
USA
#53   Dec 2019
Is there an iPhone app for the Virtual Reality Viewer? I don't have an android phone like this: https://play.google.com/store/apps/details?id=com.ezrobot.virtualrealityrobot

robo rad
Canada
#54   Dec 2019
This is what I am interested in doing this summer outside when my robot goes on patrol outside. See what the robot see in 360 or 180 degree VR 3d and take control of robot drive and arm movements. I just got the Oculus Go and it is a fantastic VR device to try this, will the plugin support all VR head sets?

@RobotRad, the supported VR headset requirement is in the plugin description. Steam compatible headsets are supported - or google cardboard

robo rad
Canada
#58   Dec 2019
Hey thanks DJ I do have the steam client working with my GO ,will try out the ARC skill plugin as well. Glad to know you are working on this cutting edge technology way before anyone else, I bet you are already working on adding EZ chip to bionic arms and legs for disabled people ten years in the future!

Autiboy
USA
#59   Jan 26 — Edited Jan 26
Is their a way that I can move my robots head when using my htc vive as it is not working right now.  Never mind got it had to activate servos

#60   Jan 26 — Edited Jan 26
Here's a tutorial that I highly recommend watching that walks you through the process: https://synthiam.com/Community/Tutorials/Control-robot-with-Virtual-Reality-headset-18905

You can find related tutorials to this plugin above under the description and manual, including a link to that tutorial