How to add the Wii Remote robot skill

Follow the Getting Started Guide to build a robot and use the Wii Remote robot skill.

How to use the Wii Remote robot skill

This skill allows you to control servos, movement panels, and scripts with a Wii Remote Controller. Use the controller's Home button to enable/disable the accelerometer servo movement. The directional pad (D-pad) can control a movement panel. You can use the other buttons to activate custom scripts.

*Note: There are hundreds of versions of Wii remotes from both Nintendo and aftermarket clones. Synthiam supports the standard protocol of Wii Remotes but isn't a manufacturer of them. Synthiam is not responsible for the operation of Wii Remote controllers. Your controller will include instructions for pairing mode. It's best to consult the instruction manual for the exact instructions of your version.

*Note: If your Wii Remote is connected after the project has been loaded, press the Refresh button to detect and load it in the device drop-down. 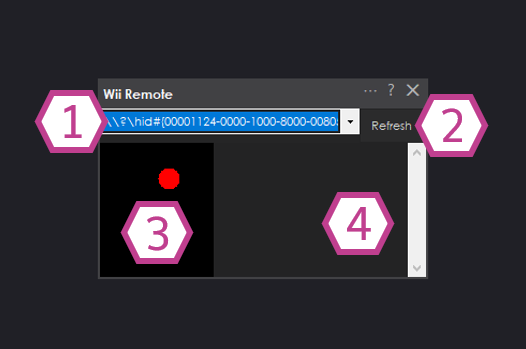 1. Device Drop-down
This drop-down allows you to select the Wii Remote that you'd like to connect to.

4. Status Display
This displays some text that describes the actions that have been executed by the skill. Button presses show up as "Button A down" for example. 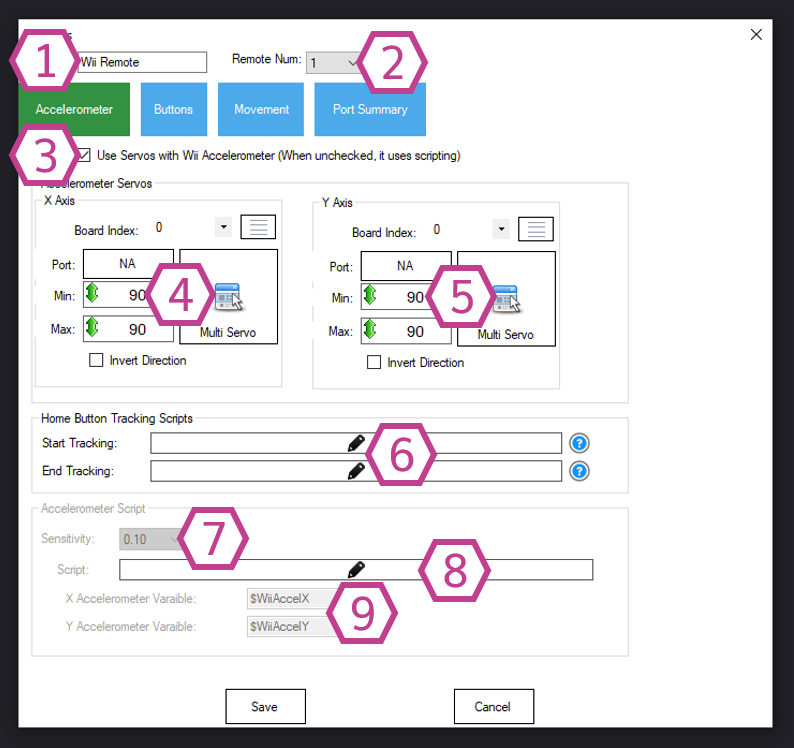 1. Title Field
This field contains the title of the skill. You can change it if you'd like. *Note: Changing the title will also change the title in the controlCommand() associated with this skill.

2. Remote Number Drop-down
This drop-down assigns a number to the Wii Remote itself. The Controller LED will move to the position you select in the drop-down.

3. Use Servos with Wii Accelerometer Checkbox
This checkbox enables the Wii Remote to control servos with the accelerometer directly. A great application for this is a pan/tilt servo configuration with a camera on top. The Wii controller can position where the camera looks.

4. X-Axis Servo Settings
This option is only available when the "Use Servos with Wii Accelerometer" checkbox is enabled. This section allows you to set up x-axis servo movement parameters such as servo port, board index, servo configuration, max/min degree limitations, multiple servo control, and inverted direction.

5. Y-Axis Servo Settings
This option is only available when the "Use Servos with Wii Accelerometer" checkbox is enabled. This section allows you to set up y-axis servo movement parameters such as servo port, board index, servo configuration, max/min degree limitations, multiple servo control, and inverted direction.

9. X/Y Accelerometer Variables
These variables store the real-time x-axis and y-axis accelerometer readings. You can change them if you'd like and use them in scripts. 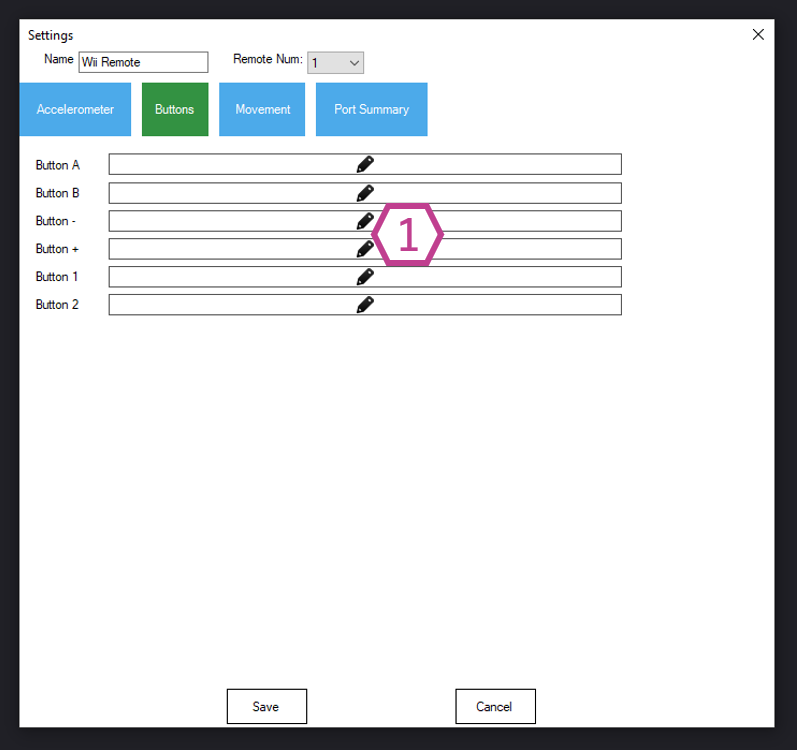 1. Button Down Scripts
When a button is pressed down the corresponding script will activate. Available buttons are the A button on top, B button underneath the controller, minus & plus to the left and right of the Home button, and 1 & 2. 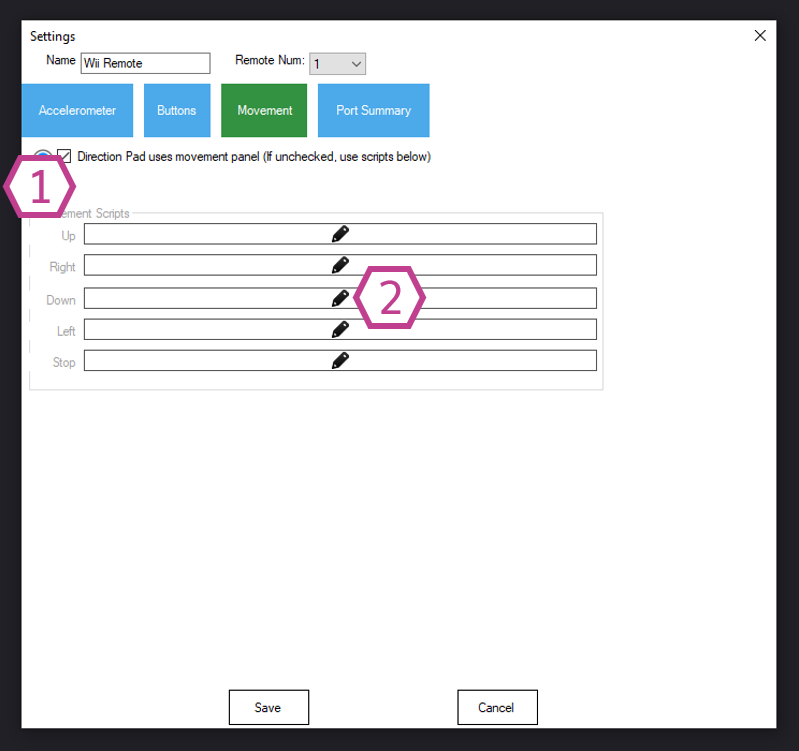 1. Direction Pad Uses Movement Panel Checkbox
This checkbox enables the binding of the Wii Remote D-pad to control a movement panel skill. When disabled the D-pad will activate the scripts below it.

2. D-pad Movement Scripts
These scripts will only run when the "direction pad uses movement panel" checkbox is disabled. When a D-pad button is pressed down, the corresponding script will activate. The stop script will start when each D-pad button is released. 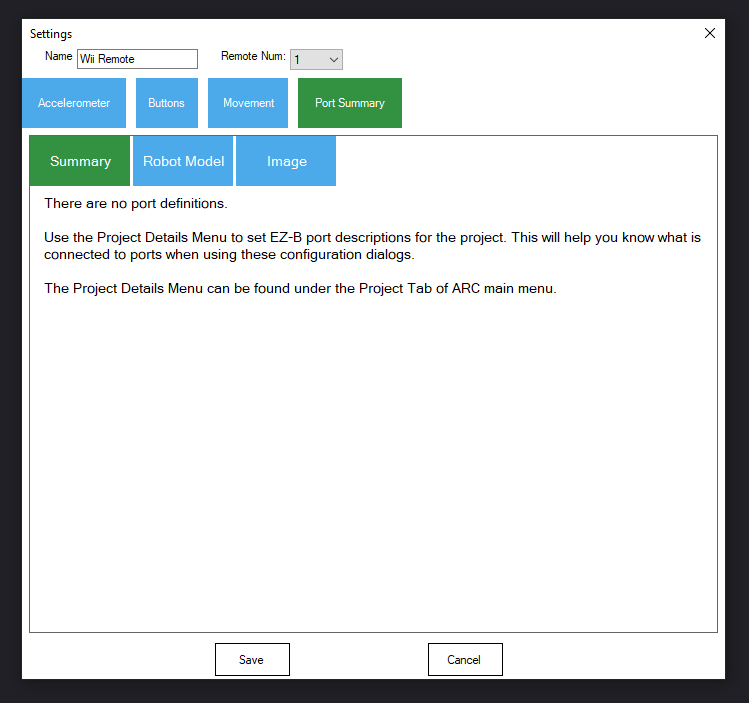 How to use the Wii Remote Skill

*Note: If you have previously added the Wii Remote to your Bluetooth device list and are reconnecting, you will have to remove the Wii Remote from the list. The controller must be re-added each time it is used. Unfortunately, this is the way it works on the PC. It's not a bug with ARC.

*Note: Wii Remotes with Motion Plus are not compatible with ARC.

1) The first time you attempt to connect a Wii Remote to your computer via Bluetooth, it will connect to Windows Update to obtain drivers (which take a little while to install). This only needs to happen once, and then you'll be able to connect quickly every time going forward.

2) To make the Wii Remote discoverable by your computer, there are two methods based on your Wii Remote version. Either push and hold both the "1" and "2" buttons simultaneously or press the red sync button under the battery cover. The blue LED lights on the Wii Remote flash, indicating the Wii Remote is ready to connect. The Wii Remote only stays discoverable for ~20 seconds during the adding process, so you may have to make the controller discoverable multiple times. Alternately, hold these buttons until you get a notification that Windows successfully installed the device.

3) In Windows 10, Open the Control Panel and click "view devices and printers" (click Classic View to find this more easily.)

5) Select the Wii Remote, which should show up as a Nintendo device (ex: RVL-CNT-01), and click Next.

6) When prompted to add a pairing code, leave it BLANK and click Next.

7) Windows will notify you when it has connected to the Wii Remote. You can now release the buttons (if you were still holding onto them).

11) Configure the Wii Remote skill settings to use the controller to activate a movement panel or use the accelerometer to directly control servos, such as servos in a Pan/Tilt configuration.

The Wii Remote skill is compatible with Mobile Apps (works on iPhone and Android). The mobile device won't use the controller itself. Rather the accelerometer in your mobile device will simulate a Wii Remote and take its place in the app.

This tutorial uses the ControlCommand() EZ-Script command that instructs the Auto Position control to create a frame and...

Whats The Passcode For Connecting A Wii Remote?

So basically when i tried to follow the tutorial for connecting wii remotes, well I cant choose that this wii remote...
question

Hello,  I'm having a lot of difficulty getting  the Wii controller to work consistently on Windows 10. I've searched...
question

does a wii remote work with the Arduino? I would like to know is anyone made it work