This tutorial will explain what is needed for powering an EZ-B v4, any peripherals connected to it such as servos and sensors, and will talk about the different power requirements and hardware options that can be used to help avoid problems with your robotic projects.

Whether you are new to robotics, or have been involved in the field for years, hopefully this will help to confirm or deny a few misunderstandings, and set you on the road for having a safe and solid electrical system in your robotic projects. This tutorial will cover Amps, Volts, EZ-B v4 power specs, Batteries and Mains supplies. It will also go through what Series and Parallel means, how to use a multi-meter, Power regulation such as regulators and Buck converters, and electrical wire.

To get the ball rolling, this step will explain one of the most important aspects to any electrical system, and something that can sometimes cause confusion or can be overlooked... "Amps" (also referred to as "Current" or "Amperage").

What are Amps and Current...

"Current", is a measurement of how much electrical charge flows through an electrical circuit. The more charge that flows, the bigger the current. Current is measured in units called amps. The symbol used to define amps is depicted with an "A". As an example, "10A" is a smaller current than 20A.

The definition of "Current" from the Oxford English Dictionary...

2.) A flow of electricity which results from the ordered directional movement of electrically charged particles:

You will see one thing in common in both of the above statements... direction. Current, only travels one way, which is from a power source to a device. A device will "suck" (referred to as "draw") only the amps it needs from a power source. It is very important to know that in any electrical system, amperage will present problems if you try to attach a device that will draw more then the circuit or power source can handle. This could be through the cables, connectors such as jacks and terminal blocks, or other devices that the same current passes through. Issues can also arise if the device in question draws current away from other devices connected to the same circuit.

One thing that gets overlooked quite often, is how important current is. EZ-Robot has this covered with their Revolution robots by supplying LiPo battery packs (more info about batteries in step 4). But when it comes to custom made robots, or indeed powering a revolution robot with something other than the supplied battery, problems can sometimes arise. Below are a few examples of questions that people ask quite regularly on the forum...

"Why does my EZ-B keep resetting?"

"Why does the EZ-B in my robot keep browning out?"

Sometimes, the reason maybe that the battery needs charging, an i2c cable is lose, or an initialization script has not been run. But the most common reason, is inadequate current. For example, someone will use a wall adapter with the correct voltage instead of a battery, and will try to move servos or motors connected to their EZ-B. The problem comes when they find out that the wall adapter is only supplying 2 amps, where as a single servo could need 3 amps and more for "servo inrush".

This term is used to describe the action of a servo, or indeed a DC motor, when it first begins to move. Lets use a single EZ-Robot HD Servo for example. When the servo begins to move, a very brief (few millisecond) surge of current is drawn which can be 3 Amps or more depending on the weight of what the servo is moving or lifting. The current then drops to its "running" current which is usually around 200mA (milliamps). So a 2 amp power supply will not be enough to handle the 3+ volts for the servo inrush.

The following is a quote from one of EZ-Robots valued community members, Dave Schulpius, and gives a very good and simple analogy of an electrical circuit...

A comparison I like to use for electrical theory is it's like water in a pipe:
*The water is the current (amps). It does the work.
*Pressure behind the water is the voltage. It pushes the water along.
*The pipe is the conductor (wire, connectors or traces) and needs to be the proper size and type (resistance) . It carries the water along through the pipe that the pressure is pushing. 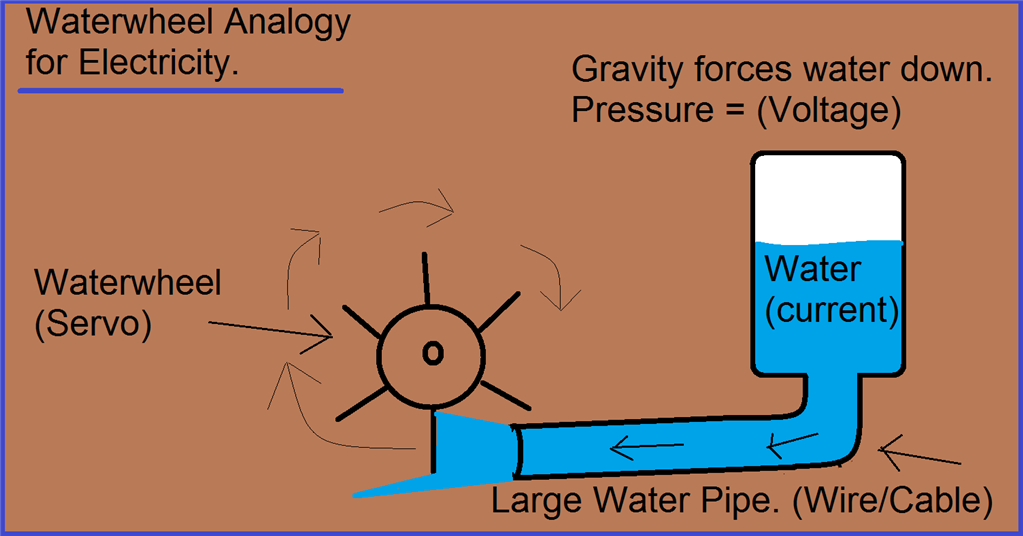 With a large water pipe (large gauge wire or cable), the more the current can flow and deliver more amps. This turns the waterwheel (or servo). 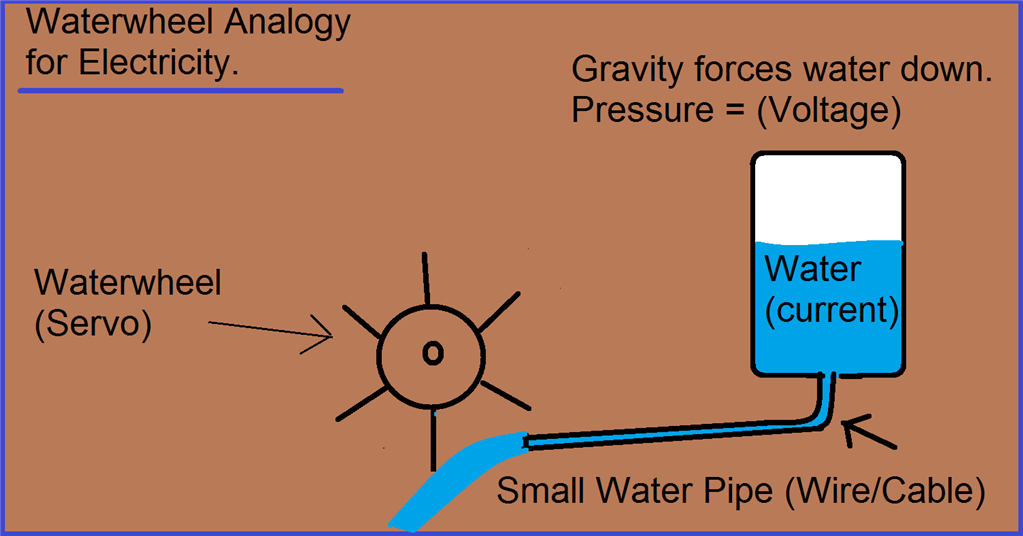 With a narrow water pipe (small gauge wire or cable), far less current can flow, and delivers less amps which is not powerful enough to turn the waterwheel (or servo). Or to put it another way, you drink a glass of water.

As the main culprit of current draw on a robot are motors and servos, you will need to work out the inrush current for every servo and/or motor that you are going to use, whether servos are connected to an EZ-B, or DC motors are connected to a motor controller with separate power supply.

From each servo or motor, you add up their "inrush current" figures, and that is the minimum current you need to supply. To do this, count up the number of servos, number of motors etc.

Multiply the number of servos and motors by their inrush current. Add everything together and that's the minimum amps to aim for.

The total inrush current works out at "19 amps". This would be your minimum current needed that your power source should deliver.

If the power supply you are using cannot provide the amount of current that is needed, it will cut out, or in the case of an EZ-B, brown out ("Brown Out" is the term used when the EZ-B becomes unresponsive. Turning the power off and on again ("Power Cycle") will put the EZ-B back on normal operating mode).

You may see the term "mAh" or "aH" mentioned a lot around the place. "mAh" means milliAmp hours, and "aH" is amp Hours. This will mainly refer to a batteries capacity, meaning how long a battery can run a device at a certain amperage. For example a LiPo battery that is rated at "1000 mAh", would be completely discharged in one hour with a 1000 milliAmp load placed on it. Now if this very same battery had a 500 milliAmp load placed on it, it would take 2 hours to drain down. If the load was increased to around 15,000 milliAmps (15 amps), the time to drain the battery would be only about 4 minutes.

! Not supplying enough amps will cause problems, and the servo will not move.

! Supplying to many amps won't cause any damage as the servo will only take what it needs. To use another analogy, we will use three drinking straws... small, medium, and very large.

You take a drink of water with a small straw. You take a big suck, but you won't get very much drink and you may not be satisfied.

You take another drink of water with the large straw. You will probably get too much drink and won't be able to take it. But, your brain knows this, so if you know not to use the large straw, or suck gently and just what you need, much like a servo for example. The circuitry knows what how many amps it needs to operate, and wont take more than it can handle.

Finally, you take a drink of water with the medium straw. You get just the right amount of drink you want.

! Caution is needed though. Using "very" high amperage and encountering a short circuit can cause a lot of damage, so use correctly rated fuses or circuit breakers where possible.

The following is a quote from an 80's movie that best describes the power of amps when discussing touching the third rail of of a train track...

It's not the volts that will kill you... It's the amps! *eek*
Next Step