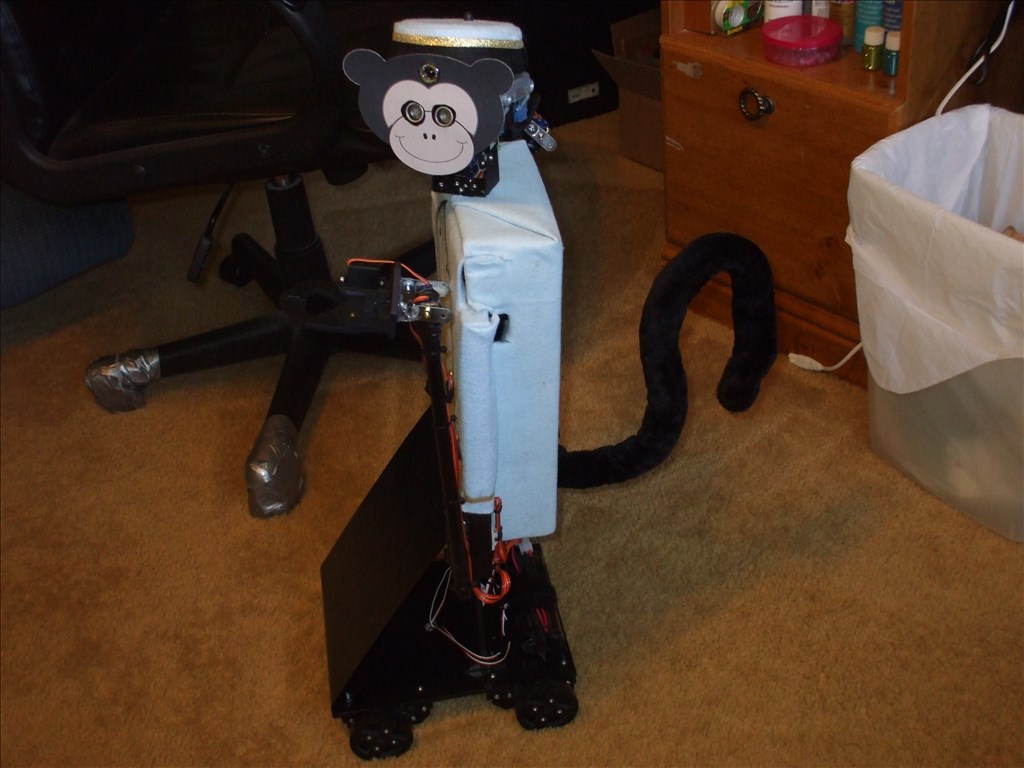 Head: A blue square plastic container from Family Dollar store. The PING sonar eyes are mounted inside the container with hole drilled for the eyes to stick through. The face is a custom sized monkey graphic I found online with the "eyes" removed from the image so I could place the holes for the PING sonar where I wanted them. The face was printed into sticker paper and placed onto cardboard and trimmed to size, with holes cut for the PING sonar eyes and camera lens. The face is mounted to the plastic container head via double sided tape.

Hat: A blue round plastic container from Family Dollar store, covered with light blue felt via hot glue, with a black felt band and gold trim. A hole was drilled in the top of the hat for the camera antenna to stick through and a front slot was cut in the plastic to go around the top of the camera lens. The hat is easily removed.

Body: Sheet metal precut from Lowes hardware store, size 8" wide by 24" (22GA) by Steel WorkS item #1804 (Hill#11773). The sheet metal was bent in the middle and on the ends to create edges for mounted. The thickness was just thin enough to still be able to bend by hand via a fair amount of force. A piece of 12"x12" sheeting from Budget Robotics was cut to 12"x6" to make the back brace of the body where the EZ-B controller is mounted. Overall the body was made to look like a large J2 robot from www.J2RScientific.com. The "clothes" are designed to look like the blue bell hop uniform worn by Finley from the movie "OZ, The Great and Powerful". They are made from light blue felt, hot glue, brass paper tacks and gold ribbon.

Base: 2 sheets of 8"x10" sandwiched together. The drive servos are mounted via servo mounts from www.BudgetRobotics.com

Arms: The upper arms are stationary and made from wood. The lower arms are made from round metal tubing (the kind from Harbor Fright grabber tools).

LEDs: These can not be seen currently but there are 4 red segment LEDs mounted under the head to create a Johnny 5 type mouth (these will not be used now). There are also 2 R/G/B three way LEDS with common cathode mounted through the body around the shoulders. These will still shine through the clothes. They are wired to emit red or blue from each and green at the same time from both LEDs.

Project Background: I started out with the goal to simply build a larger J2 robot with an overall look like Johnny 5 from the movie "Short Circuit". However a design goal I had was to make the robot reach objects on the ground and pick them up to hand to me at a higher level (or throw objects, like a ball). Long story made short, I ended up with arms that looked long like monkey arms. After seeing the movie "OZ, The Great and Powerful" I wanted to create a Finley inspired or themed robot, so my large J2 became Finley.

Lessons Learned:
1.) When buying multicolor LEDs like R/G/B, make sure you select common cathode (common ground) not common anode (common positive).
2.) Watch that hot glue, don't assume a glob is dry and touch it!
3.) Hot glue really does hold almost anything.
4.) Lowes has tons of neat little hardware pieces to make your own brackets in the hardware "drawers" section.
5.) DO NOT USE thin dinky wire when connecting a 7.2V 6800mAH battery to something. Instead use 14 gauge wire to avoid a tiny tragedy with smoke and melted plastic stink.
6.) When picking 14 gauge wire from the hardware store, do not assume that because the wires are placed together that they are all "strained" conductor instead of solid.
7.) Solid 14 gauge wire is hard to bend and solder!
8.) Never use felt or cloth for a project if you don't (a) know the name of the color (For example light blue will not due with their are 50 shades of light blue.) and (b) you don't have enough for any possible future additions!

Future Plans:
1.) Max out the features of the ARC software to create an interactive Finley
2.) Add sensors to the grippers, probably IR
3.) Add a battery sensor
4.) Add a compass
5.) Add a tilt sensor
6.) Add a link between my own AI software developed in .NET to the ARC software
7.) Post some tutorials as I see areas I can share some knowledge
8.) Keep having fun with EZ-Robot! 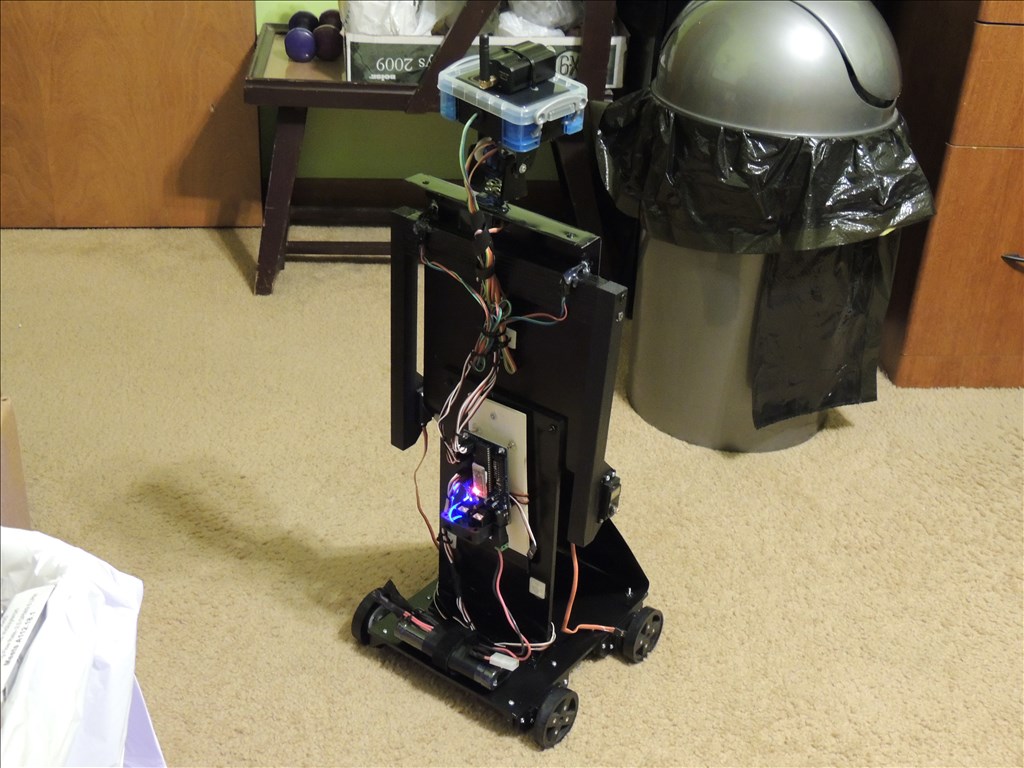 Update: 8/20/13 Finley gets a tail
Finley with his new removable back cover and tail (as you can see he is much happier):

The back is constructed from a cardboard box cut down to size and notched to fit up snug against the back. The notches allow the back to cling to the main body. I can easily pop the back off to access the electronics mounted to the inside of the main body. The cardboard was covered in felt matching the front, arms and hat of Finley. The tail is wire tied to the back cover. I got the tail from eBay. It is a Halloween costume accessory, listed as a cats tail with a stiff internal flexible wire. I can bend his tail to any shape I want, though not motorized to move on its own. The base of the back is left open to clear the fan I mounted to help cool the voltage regulators. I think Finley looks much better with a back cover and tail. It took me a while to track down the felt color. The felt I originally used was just something I called "light blue" from a variety pack on sale at a local craft store. It indeed was not "light blue" it was "snow blue".

#1   Jul 2013
Justin,
Very cool robot build. I can tell you put plenty of thought into the different features.
Am I right in thinking the arm movement is towards the center of the robot?
I sure like the grippers, and the theme is well presented.
Finley is neat, looking forward to a video.

Troy
USA
#5   Jul 2013
I agree! This is a great way to post (as a first post) about our projects. As the project evolves I can edit the first post.

MovieMaker
USA
#6   Jul 2013
That is a cool project! I used to have Nightmares about those flying monkeys when I was five. I am over it now(not really.)

@Steve S you are correct about the arms. I started to make arms with proper sholder motors, but I could not see a good way to accomplish that given the length of the arms and keep my design goal of having the arms reach the ground to pick up objects. So the arm movement starts at the elbow and is in center of the robot.

@MovieMaker I have a pair of angel wings I picked from a halloween clearance, but they looked so ugly on Finley I never mounted them. I would like to add flapping wings and some sort of tail in the future.

1Natoya
Canada
#9   Jul 2013
Super cool project Justin. I am looking forward to the video too. I am excited to see how Finley works.

What do you think? I can tell you my cat LOVED the new tail and was very confused why she was scolded for playing with it.

I have decided to leave out the wings. I want to add a few more features before I post videos. I really want his video demo to shine

The hands look like they were printed on a 3D printer....Can you post a URL to the STL file?

#13   Aug 2013
@Tamelon I really like these grippers on Finley. They were laser cut, not 3d printed and were manufactured by Toby at: http://www.tbaumg.com An alternative to the ones I bought would be the new micro grippers at ServoCity: http://www.servocity.com/html/micro_gripper_kit.html

#14   May 2014
@JustinRatiff,
Working on a robot with my grandson, liked your Finley Robot.
A great family robot build!
I could not find anything by Toby mini grippers, servocity was your second choice?
Thank you for your great contributions to the forum.
Steve S

#15   May 2014
For small grippers I would go with the servocity grippers. I really like their size.

#17   May 2014
Ok, fixed the pictures. That's what I get for hosting them on my site and moving the pictures

Thanks for the kind comments Steve. If you decide to build a monkey themed robot like Finley and need any help please let me know.
I have not worked with Finley lately. I've been working on Mini-B9 or testing ideas in a small robot I have not posted picture of yet.

#18   May 2014
Justin,
I have worked for several weeks with my oldest grandson Hunter after he begged me to build his own EZ Robot.
He is only 7 years old, but has shown an interest into robotics! I will let him post later.
Thank you for responding.
We liked your robot, We are attempting to build a simple Boxbot upgrade. Rich provided a tutorial playlist for Hunter to watch prior to starting the build.
I will look into the servocity grippers.
I have been watching for any updates on Brets great build Mini B9. You will do a great job of continuing the B9!
Looking forward to your post on your new small robot ideas.
Thanks,
Steve S 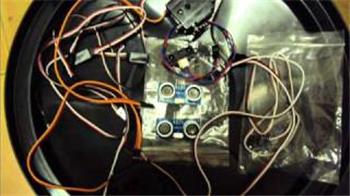 Hello, greetings to all robot builders, I am eager to receive the board ez-b, to give life to my butler robot, robot...

Name: Data This is a full-scale replica of Data from Star-Trek that I have built to entertain the clients of ReStoring...

My son named this guy Big WALL-E in comparison to the smaller Interaction model he aptly named Little WALL-E... Big WALL-E began life as a U-Command...