- Configure which sensor data is displayed in Sensor Stream Server

- Variable data are now cleared when a new project is loaded

- New control SketchPad. Use ControlCommand() parameters to custom draw on the control. Use the control for custom room mapping. Or robot path history. Or face expressions in full screen mode. Or or or

... There is an example of how to use it in the Examples folder

- i2cWrite and i2cRead fix. Look at the i2c example for BlinkM in the Examples folder

- Memory Garbage collection forced for 3D Robot Designer. If opening and closing the 3D designer dozens of time in a session with lower memory PC would error.

Screenshot of the new SketchPad Control 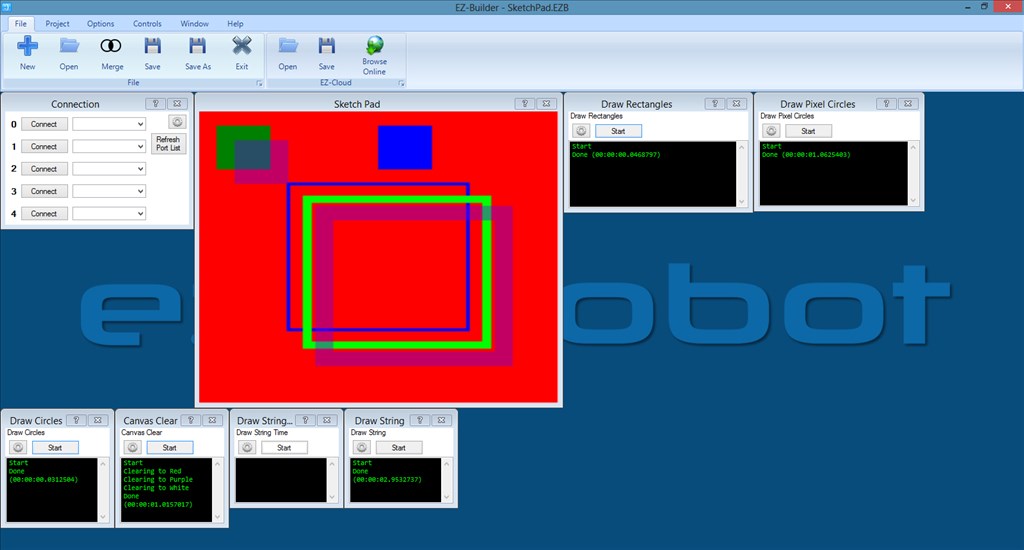 tevans
Brazil
#7   Jul 2013
Great! The full screen mode will be perfect for an wide range of uses!
Have not tried the sketch yet.. But I'm sure we're gonna find lots of uses to that.
DJ, you are the man!

Lumpy
Canada
#12   Jul 2013
Anyone having sendserial issues with the new ARC versions?

I went to load up my Hasbro R2 today and I'm getting nothing for my
audio. It was working flawlessly before.

I understand there was some syntax changes with the last few releases,
but I'm trying to send a basic command.

I'll be tearing it apart to check everything, but seems weird to just not
work at all now.

#13   Jul 2013
I had I2C issues with the syntax change and my LCD commands needed to be in brackets but they were ascii (TT, CL etc) and the script told me it was wrong.

I haven't tried it connected up but the tellymate examples still run OK, I'll connect it up and check it out when I get chance but that wont be until tomorrow night at the earliest.

Does it report a script error? Or does it just not do anything?

No script error. The audio board blinks like it's receiving but no output.

I'm double checking all connections (Volume, speaker ect) but Like I
said it was working great before.

Something has changed. Two of the same MP3 modules both not working.

And a last check, try sending 0xEC to resume, if for some reason it has been set to hold.

Just ideas from looking at the datasheet, hopefully one of them works.

Edit: I just noticed there are a couple of MDFly boards, the baud and codes may be different depending on which one you have.

My boards are an older version.

I have six of the exact same board.

Lumpy
Canada
#17   Jul 2013
Something is wrong. Something has changed.

I was able to get audio by switching to 4800 baud.

I changed over my other scripts to 4800 but they
do not work. Commands to Stop, or to start other
tracks do not work. Just replays 1 track.

Checked my audio on the SD card and all is OK.

I have 4 other EZ projects for the same audio module all
at 9600 baud and previously working fine at 9600.

Thanks for finding that bug in the new compiler Lumpy

I owe you a beer - and you owe me a beer... so I guess we're even? Or, we can have a beer together. Now get your butt down here and visit us

Awesome to hear it was a glitch.

I still owe you a few beers!

Thanks DJ for the great customer support!

#22   Sep 2013
Use the Cheat Sheet tab when editing script to see all available ControlCommands that are relevant to your project.