It is a happy valentines day for ARC and robots - now even more than ever with this ARC update. This includes many new fixes, features, stability, and performance updates. Most notably, the latest update of NMS (Navigation Messaging System) has higher resolution and improved support for new SLAM algorithms and pathfinding. 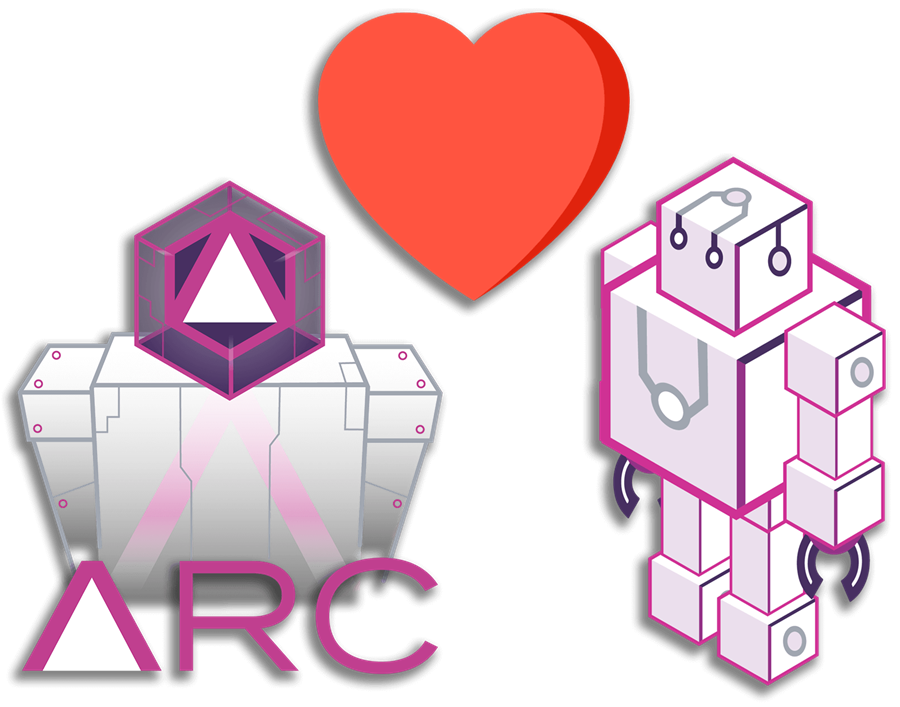 Early Access & Runtime Updates
- duplicate script option in script collection
- trim whitespace on phrases for bing speech recognition
- fix default bing speech recognition example movement command scripts
- Updated NMS to use float for higher precision and support for new features
- removed the "Speak" option from the pandora bot to use script instead. It was causing too many issues and is now updated to operate the same as other similar robot skills
- removed two duplicate buttons in add control
- Fix for intellisense in python and javascript when the line begins with a comment
- Updated to the latest python 3
- Performance improvement for script compiler

Teams Updates
- Includes all previously mentioned updates of Early Access & Runtime
- Fix for Blockly populating ControlCommand and variables and AutoPosition items
- Enable Blockly console logging with an option in the preferences menu
- Improved GUI render performance
- Updated Twitter library to fix known issues
- Fix for inverting servo in some robot skills (i.e., talk servo)
- Due to our high storage costs, free users no longer have access to cloud storage
- A few reminder banners added for free users to upgrade to pro
- Fix for when changing the size of interface builder workspace where an error would display about invalid input
- There is now a 1 hour limit per project for free users (Reversed in 2022.02.22 update)
- Optimized some internal services for performance and exception handling
- Added many new Math function blocks to Blockly (pi, sin, cos, tan, constrain, exp, and many many many more)
- Updated the shortcut creator and included links to support documents
- The previous version of Teams will be deprecated March 14th

*Note: any NMS-related robot skills will need to be updated to work with this skill. When loading ARC, it will prompt any pending robot skill updates.

#1   Feb 15
DJ, you continue to amaze. Thanks so much for your continued support.

#2   Feb 15
Thanks, Dave! It's not all me, but I'll relay your gratitude. Also, a lot of the features are inspired by community feedback. So thank yourselves as well

robo rad
Canada
#3   Feb 16
So do both the free versions stop working after 1 hour? For example if I use the 1 free skill for an hour to try something new, save the go into the free read only version will that also stop after 1 hour?

#4   Feb 16 — Edited Feb 16
1
There is no mention of Runtime having a time limit in the release notes. There is a time limit for Teams with free users. Runtime works forever. Runtime is so you can run a robot project forever, so you don't have to pay for a subscription for the robot's lifetime.

If you need more information, find it here: https://synthiam.com/Support/Install/Download-And-Install-ARC 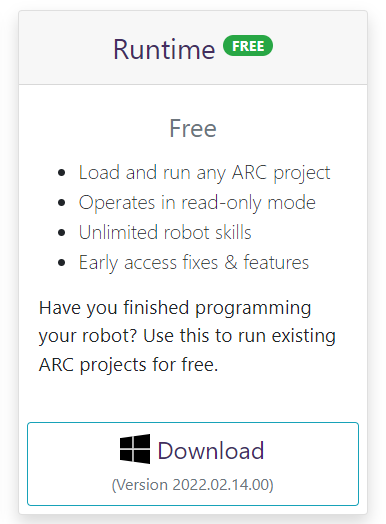 RoboHappy
PRO
USA
#7   Feb 22
Hi DJ,
How do I download the ARC onto a second PC with it asking me to sign up and pay again? I'm sure its just a matter of pointing to the right place on the site. I Have latest ARC on a tablet, would like have it on  this new desktop also.

Thanks for the help

#8   Feb 22 — Edited Feb 22
Are you logged in as the same user with the subscription? When you load a project, use Early Access or perform a function that requires a subscription, you'll be prompted to register the PC.

Or you can press this button

RoboHappy
PRO
USA
#9   Feb 23
Hi DJ,
I want to load the latest ARC Pro on this brand new Win10 PC. So yeah, Its never had ARC on it before. Currently I use a Tablet for all my ARC, but now I want to have a second computer running ARC also. When I first tried to download, it would remind me that I am already subscribed but then still wanted a credit card. I understand you can have up to two sessions running? so I am assuming two pc's?

Your subscription is applicable for two computers. You have one computer registered at the moment. When loading the software, you will be prompted to add the new computer to the registration. At no point will there be a credit card displayed. It looks like DJ sent a link to pressing the refresh subscription cache button to force the registration. As per the instructions, make sure there's an internet connection.

The process of adding a second computer to your subscription is the same as it was for the first computer. Load the software, log in as the same registered email account, and add the computer when prompted.

*Remember, you must be logged in to ARC with the same email address as the subscription