Hey everyone. I'm real excited about the Mobile Interface designer in the ARC software and now the android app so, I put together a quick little bot to test it with. I also picked up the adapter for my PC to read a wireless xbox 360 controller and used Mobi2 to test that as well.

It's in the cloud but if you want:
Mobi2

Its put together with Laser Pegs, rubber bands and a Denny's receipt. The back end has a ball bearing type caster as a thrid wheel to keep the back end from dragging, ie.. scratching the wood floor.

It's very low profile and moves pretty smooth. I found them at a wood crafts store after looking everywhere from Walmart to Home Depot. I started using these after not liking the way traditional wheel type casters perform. Like always it's just stuff I had available so I made the best I could with what I had. 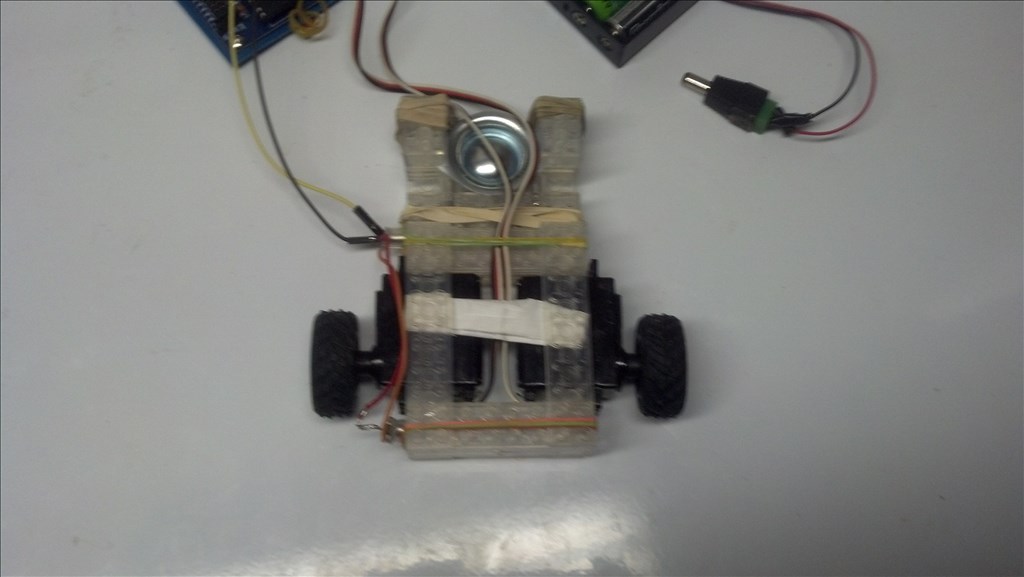 Where I soldered the wires to the Laser Pegs. I soldered a wire from the pegs hot to hot and ground to ground. Then I soldered jumper cables or servo extensions or what ever they're called to one of the pegs to connect it to the EZB: 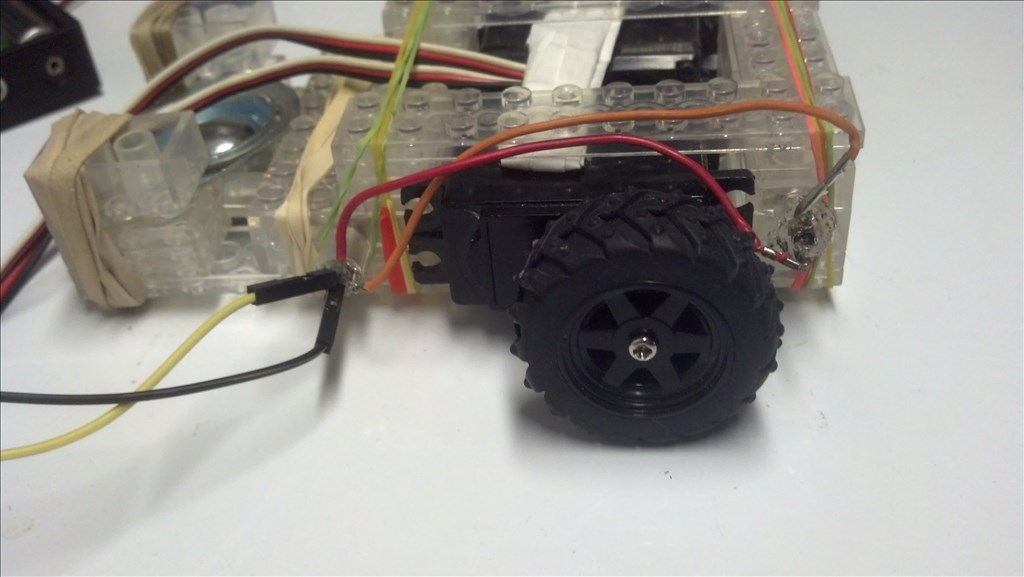 Here it is all plugged in: 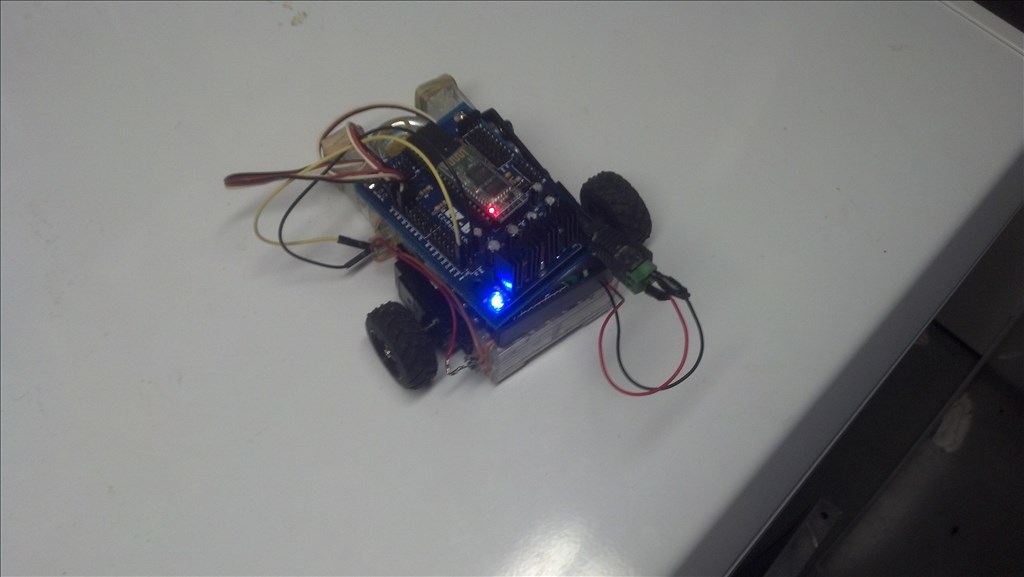 With the lights on, under light: 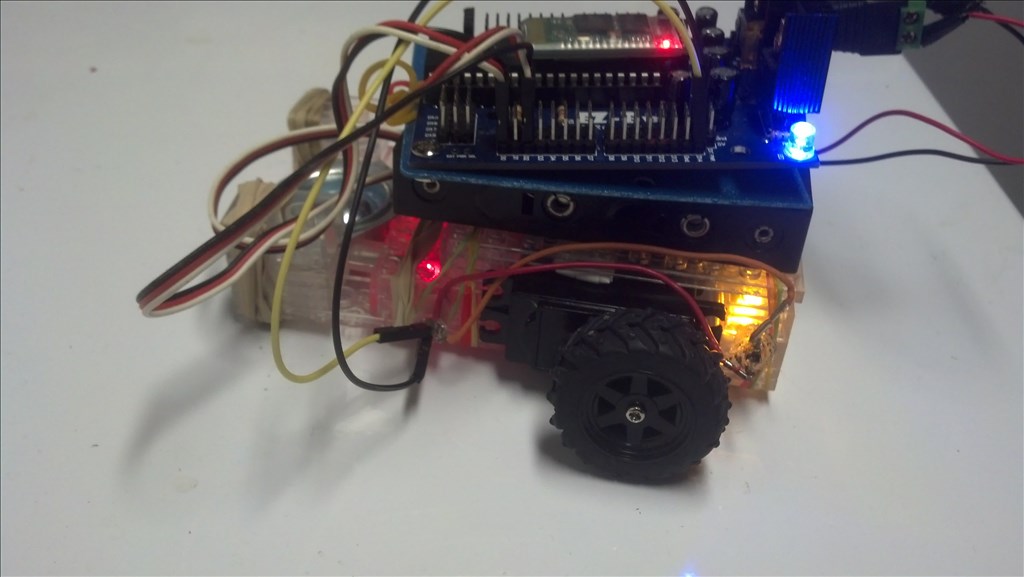 With the lights on, kind of dark: 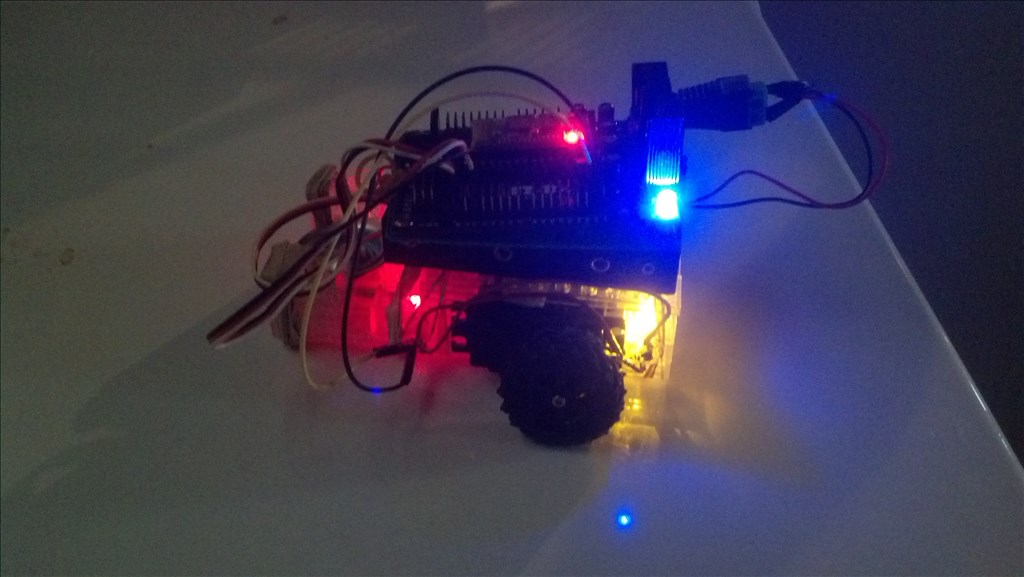 It's all for the V3 board right now so as of the current releases (2014-01-17) the modified servo movement control panel still isn't supported. Neither are the Foward(), Stop(), ect. commands. So I conveniently had a solution. I planned on using these modified servos as my Roli's pan and tilt so I'm already familiar with using the Servo(pin,value) command to control them. And that's what I did for the Mobile Interface.

And if you want to move slower you just change the numbers closer to the stop values (50/50).

So that solved that problem until the Modified servo Movement Panel becomes supported for the V3.

One other issue I'm is with the lights.
For the joystick control I have a script that turns the lights on or off when I press (a) depending on the pins current state. It works just fine with the joystick.

It does not work in the Mobile App buttons so I have a Lites On, Lites Off and a Toggle Lites button. The last one is for testing. The other two work though. (Set(D14, on/off))

So all in all I have a little "not leggo" bot that I can connect to my phone/tablet and sketch around with and turn its lights on and off. (Maybe I'll write a little blink script later.) It doesn't sound like much, but it sure is fun. 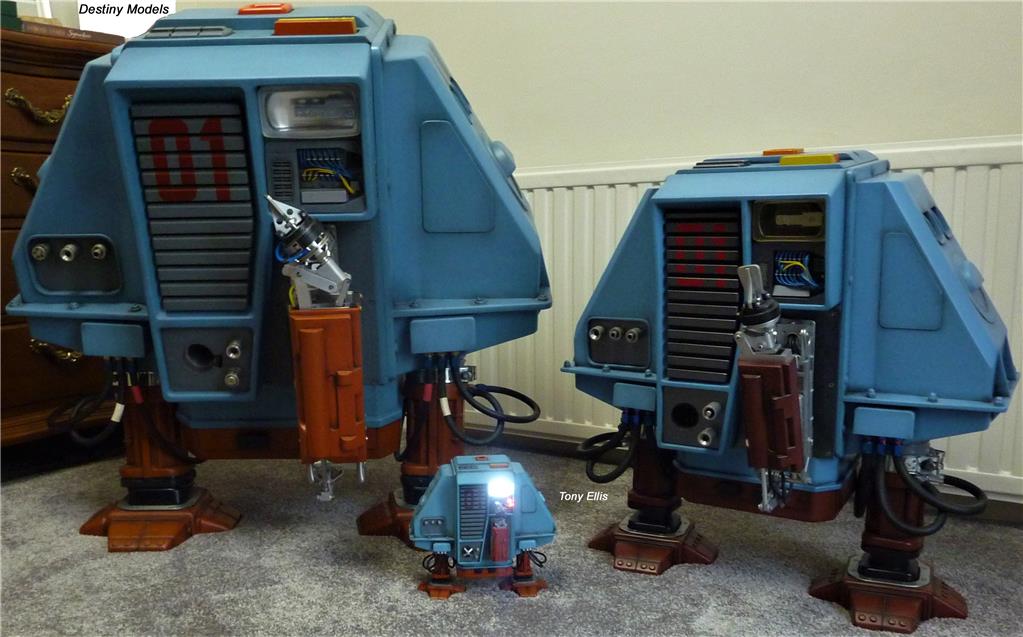 Anyone remember the wonderful Drones from the 1972 classic movie "Silent Running"? Three scales of Dewey in my studio! 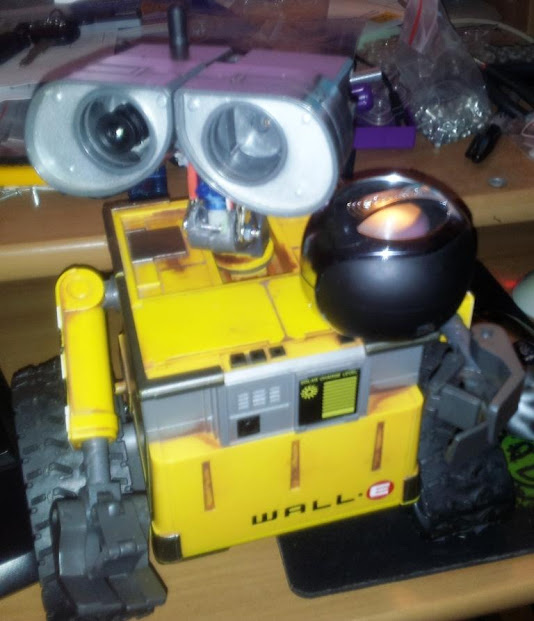 Still a work in progress and I have not decided finally on some aspects. While this is basically the same implementation... 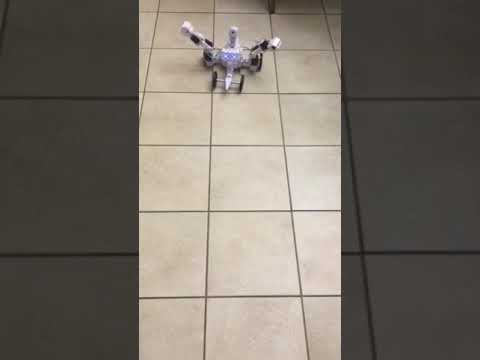 I don't know if this worked before, well here it is, new adventure Bot

enquiring minds......Oh and thank you for the script snippets

You're killing me! I've seen it all now...."Denny's receipt". That is awesome!
So Laser Pegs are clear Legos, more or less?

#3   Jan 2014
@irobot - The music artist Mobi has an album from around 1997-1998 entitled "I Like To Score" and it contained all of the work he'd done from films up until that point. His version of the James Bond Theme is probably the most famous but my personal favorite is God Moving Over the Face of the Waters.

@Justn - Yes, they seem just a micrometer or less different size but that could have just been poor manufacturing. They have certain ones that plug together that light up. Also, you have to connect them to a base that provides power to them. (Unless you own an ezb and a soldering iron.) The intention is to use those as the bases or cores and the light shines from them through all of the clear blocks.
I wasn't sure what colors where which when I put it together so that's why there are 2 different colors. I may try to find 2 other red ones. I know because of the pieces used I can't change the color of the rear red ones but I think I may have 2 red versions of the blocks I'm using that are orange/yellow now.

The only physical store you can get them, that I'm aware of is target. I originally bought them for building a light up base for my Kreon Micro Changers. They didn't fit that great on them so I'm not sure if it's the Kreons or the LPegs that were slightly sized differently but I've seen a lot of work with Leggo and Kreo/Kreons with no real mention of size issues, so I swiped their stand ant made Mobi2. The Denny's receipt is that white strip across the servos. They were a little loose so I just folded that up and slid it in there to tighten the fit.