I'd like to introduce you to my Brookstone Rover/EZ-B Robot. 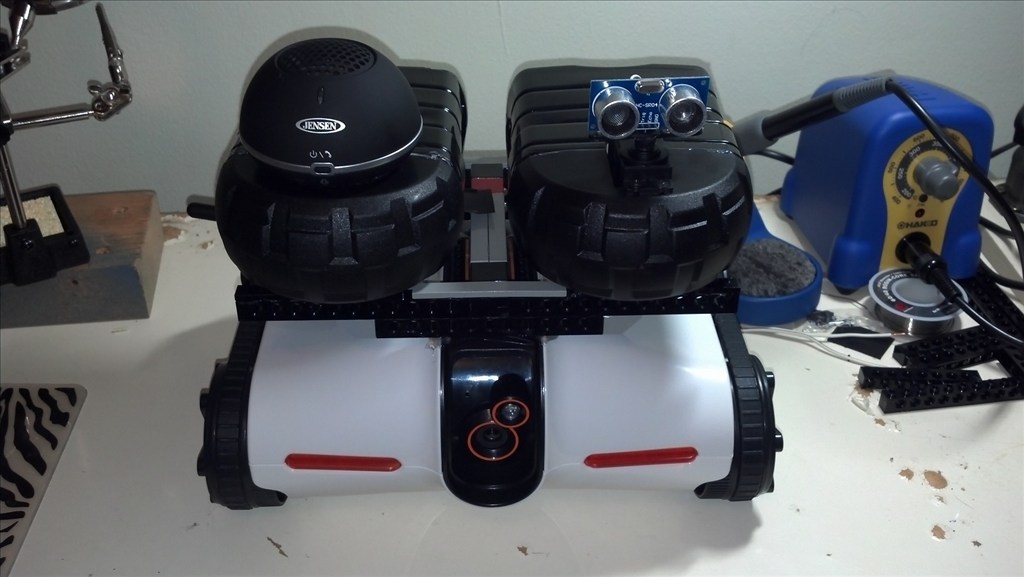 My goal with this 'bot was to stretch my legs with the ARC software, learn how to solder, and do little to no modification of the original Rover chassis as possible. I also needed to make the removal of the EZ-B, well.easy, because I have a Robie Sr that will be my next project and it's going to hop from one 'bot to the other. 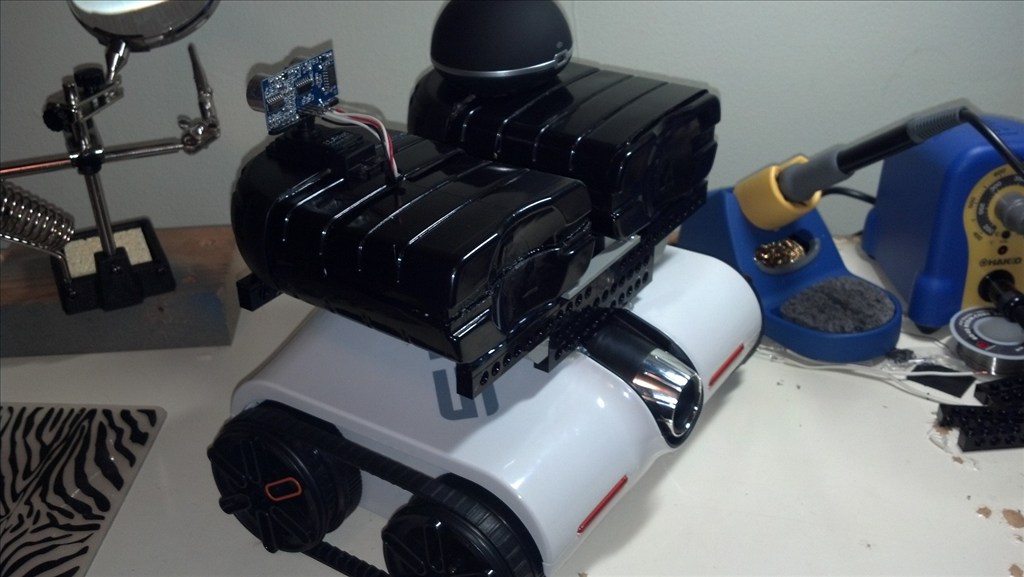 With that in mind, I decided to attach all the EZ-B accessories to the outside of the Rover. I probably spent a week eyeballing various bottles, left-over boxes, and other assorted recyclables before I finally raided my son's old toy box. I found a couple of old Lego racers boxes that were nearly perfect for what I wanted to do. 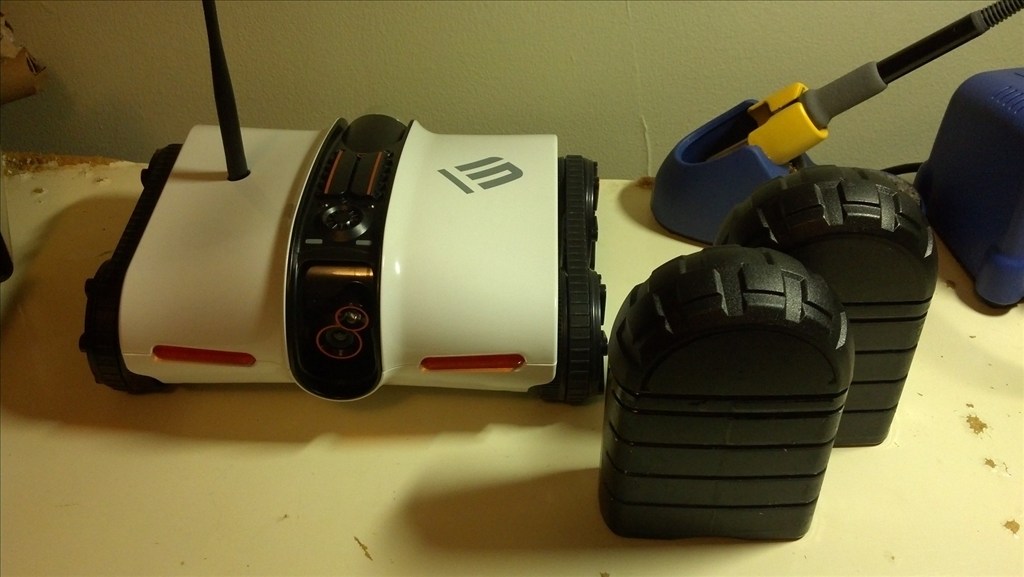 I stripped the boxes of their God awful labels using degreaser and, I can't believe this actually worked, peanut butter. The PB removed all the left over glue gunk, like a Boss. My original idea was to try and mount both the EZ-B and the battery pack within the same pod, but I just couldn't get them to fit correctly, so I opted for two pods. Adding a second pod allowed me to also add sound to my 'bot using a $30 Bluetooth speaker I found at TargetT. (Right now, I'm using MP3's of the voice for the Portal 1 and 2 turrets.) 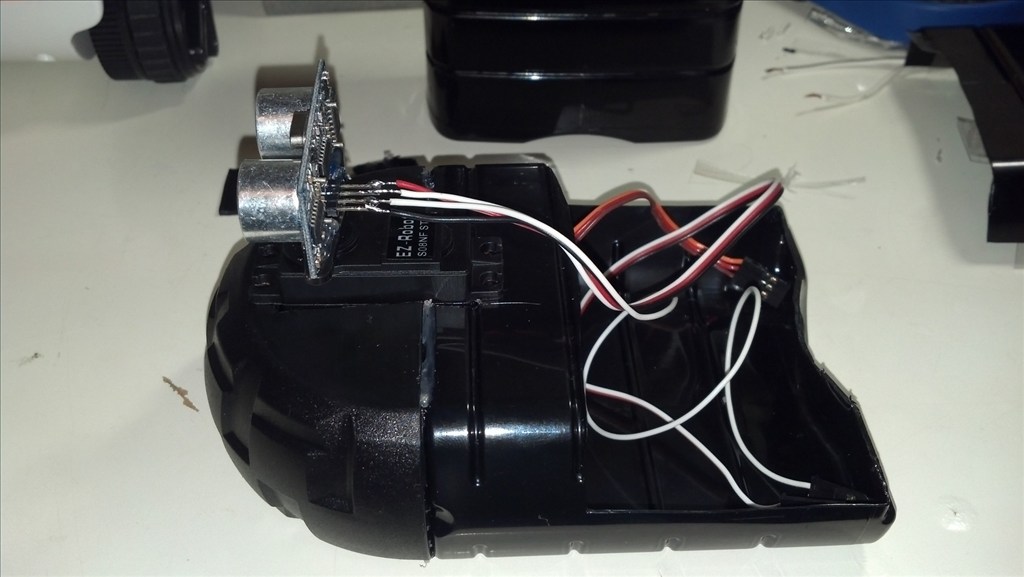 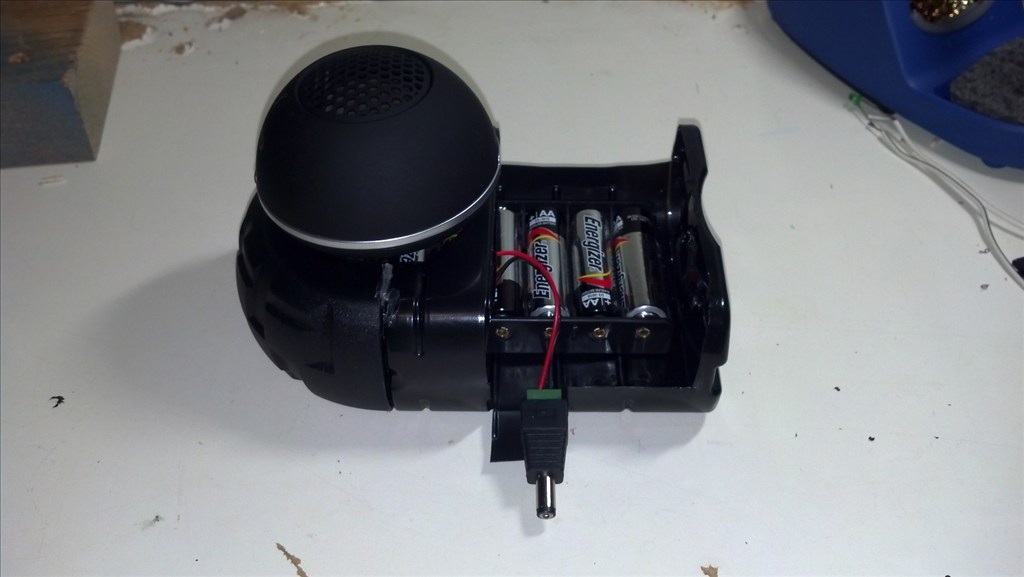 My next problem was how to mount these pods. The Rover has nice, swooping lines, but nothing very "mount" friendly. Again, I pondered this for a couple of weeks, but it wasn't until I started cutting into the pods that I decided to use some old Lego bricks. Not a sexy as the original Rover designs, but I'll take function over form in a pinch. I assembled the platform, then dug through a 20 gallon Rubbermaid tub full of Legos for an hour looking for flat, black plates to give it a nice clean area to hot glue the pods to. (You may notice that not all of the flat plates are black. That's because She-Who-Is-Known-As-The-Queen had quite enough of my digging through 20 Gallons of Lego bricks for one night and declared the search over.) 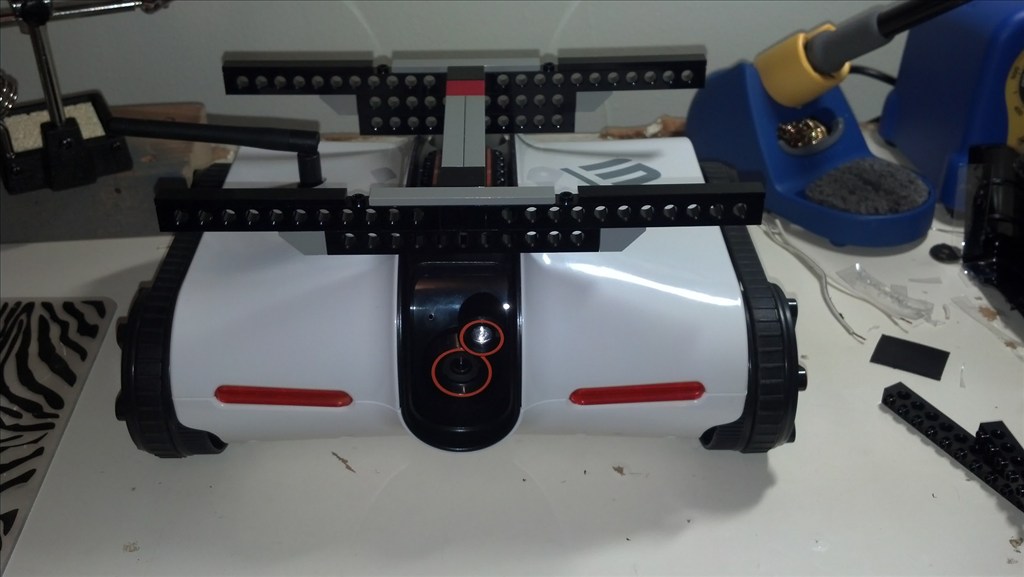 (Insert a wall of text regarding the use of a hot glue gun, my fear of soldering the Ping Sensor incorrectly, and the multiple attempts by the Rover to commit suicide when I mouse clicked the forward motion control instead of using the arrow keys.)

I would never call my build "complete", but it's definitely functional. Next steps are possibly adding a servo with a "tendon" attached to the camera housing in order to control the camera tilt. Before that, though, it's all about software scripting tests. If this were SQL, I'd have it driving me to work while performing open heart surgery. Luckily between this forum, the script editor, and all the example files, there is a freak'n cornucopia of information to help me out.

I'll see about getting video up soon. Comments and suggestions are most welcome. Thanks for looking. 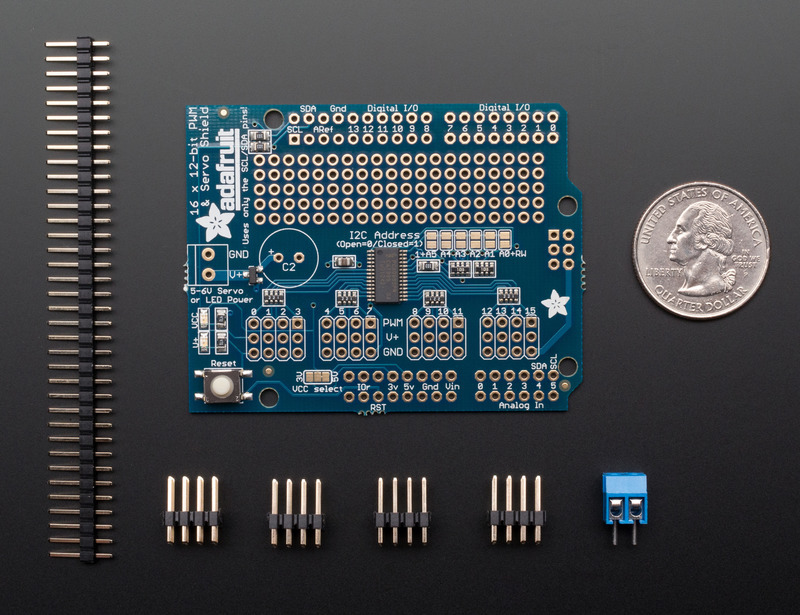 Hey guys...this Adafruit 16-channel PWM/Servo Shield integrates seamlessly to EZ-Builder now... So if you are having one... 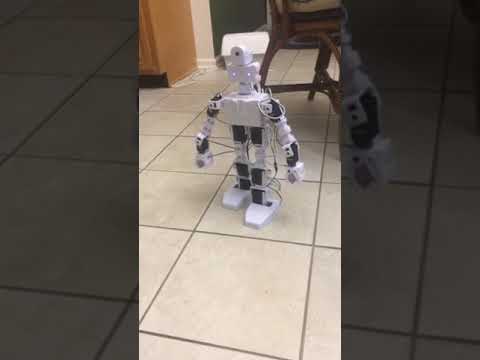 I am not 6 foot tall, but I am taller the J D, I have longer legs and arms Here is a pic: Added a servo for his head,... 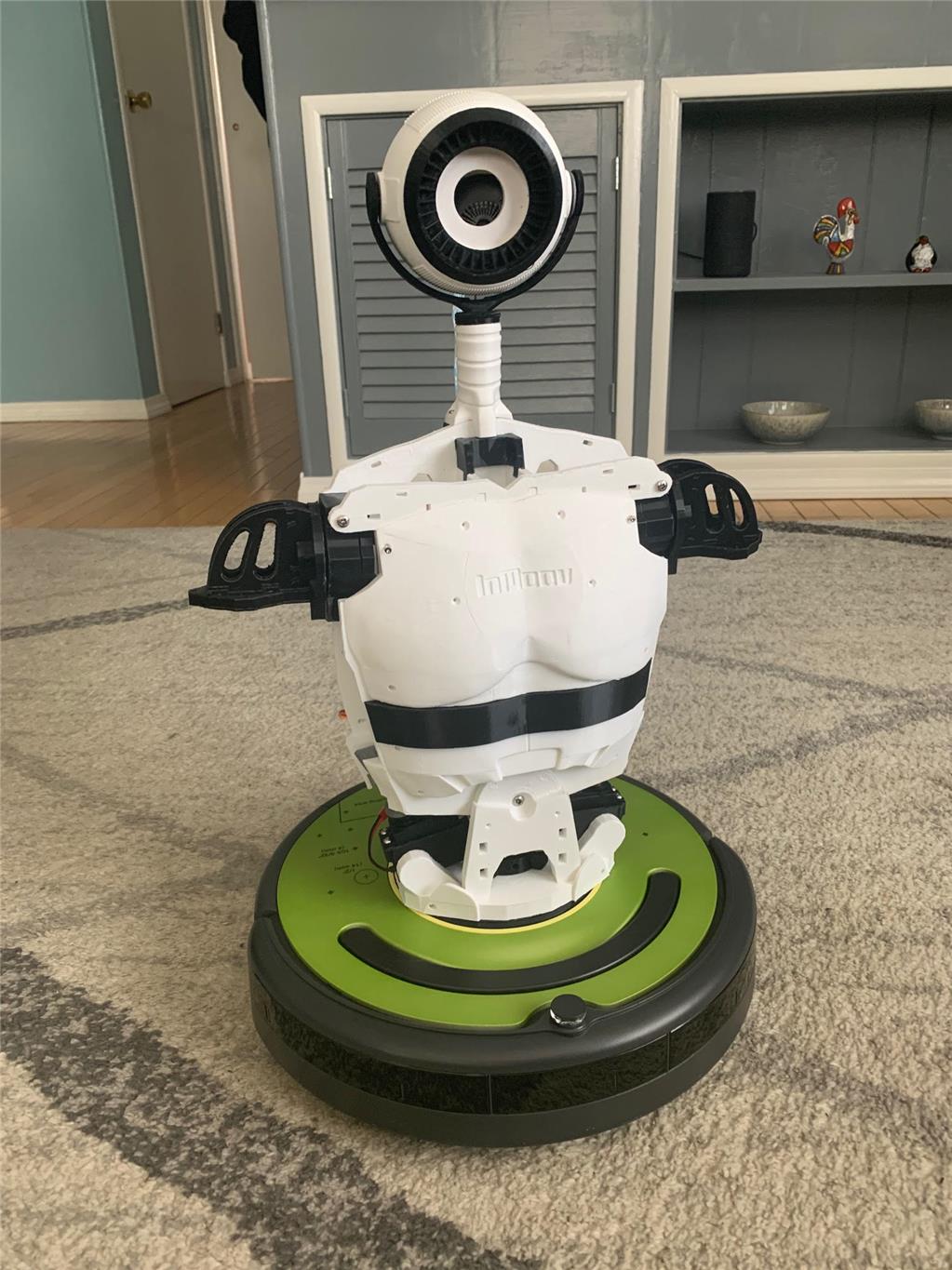 I am really excited about the new Synthiam mapping/nav functions as well as the additions to the Roomba movement panels....

#2   Jan 2013
Peanut butter... Nice... Bet that's the first time that tip has been suggested on the forums. Good job on the rover. If you like SQL then the script editor will be a breeze for you. Sounds like your at the same starting point in robotics that I am. Been avoiding soldering went to pololu and bought a bunch of jumper cables and connectors so I have been able to get by so far. You'll like these guys and gals on the forums... helpful and no flaming.

Not a mouse pad...its a silicone pad for the glue gun. I got the glue gun as a Christmas gift and I'm pretty sure the pad was added on as a way to "Man" it up. As long as I leave it next to my soldering gun, I think I get to keep my Man-card.

#6   Jan 2013
Nice looking project. Neat trick with the PB. Martha Stewart would be proud of you. However with the Peanutbutter smell you have to look out for mice.

Goo Gone (NOT Goof Off!) does a great job removing old glue. You can get it at any hardware store.

Build your soldering skills by soldering a bunch of paper clips together in different shapes. Not a bad way to learn before you put the iron to your robot. I use jumpers a lot but soldering is a must in a lot of cases. One example is in one of DJ's videos where he has you soldering leads onto the 2.5 Amp Motor Controller. I just used jumpers. Heck they are header pins and are there for connector housings. I also split the PWM pins with two different jumpers where he shows you to soldering them together. I wanted to run two different motors at to different adjustable speeds. One PMW for each motor. So there's more then one EZ(-B) way to skin a robot!

ME i love to solder all the time,i make my own hand wired circuit board,plus as a engineer,i design and made so many hundreds of circuit boards ,i can almost do it with my eyes shut.
solding is so much FUN

McJeff0125
USA
#8   Jan 2013
@dschulpius - I practiced soldering on the board I removed from my Robie Sr. before I took on the Ping Sensor. By the 3rd pin I was feeling pretty good. I'll give the paperclip trick a try, tough.

Do you have an online source for the jumpers? I've seen those pictured on several other projects and I like how clean they look.

@robotmaker - I poured over your Rover pics before I started my build. I'm hesitant to crack open the body of my Rover, but after your pictures I'm not as hesitant.

robotmaker
USA
#9   Jan 2013
it was easy to add IR sensors to it and other parts
also more of a expert on sensors any type or how to place them on a robot ,plus other mods,let me know

that paperclip is very old idea from college ,to learn how to solder
Login to post a comment