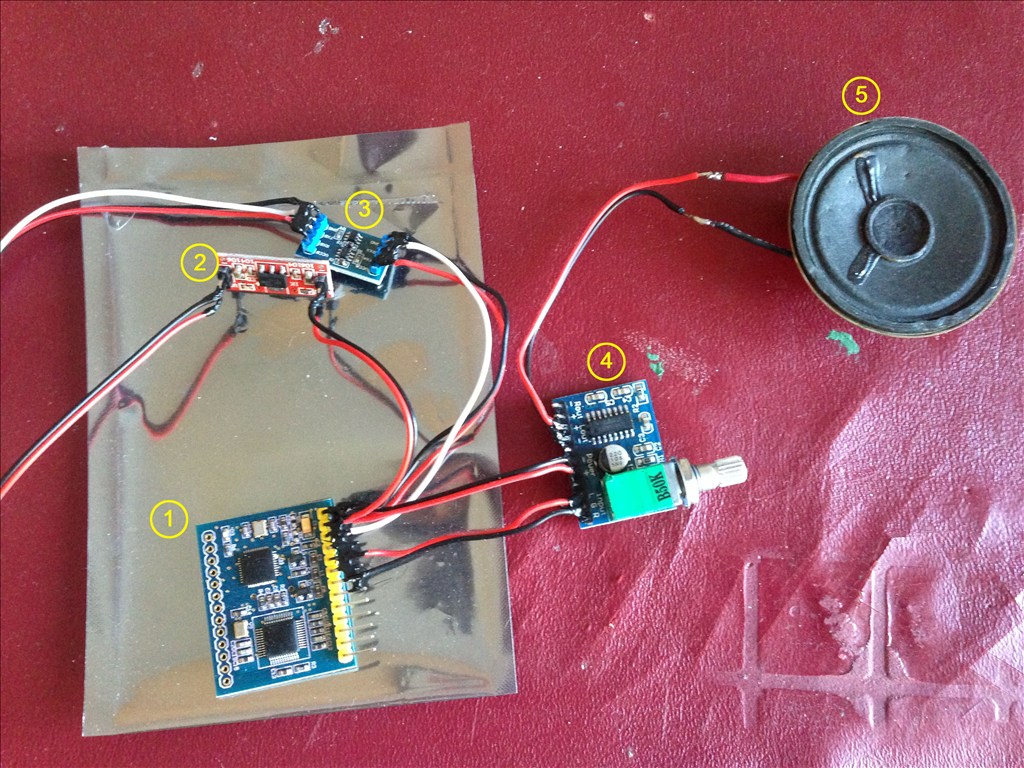 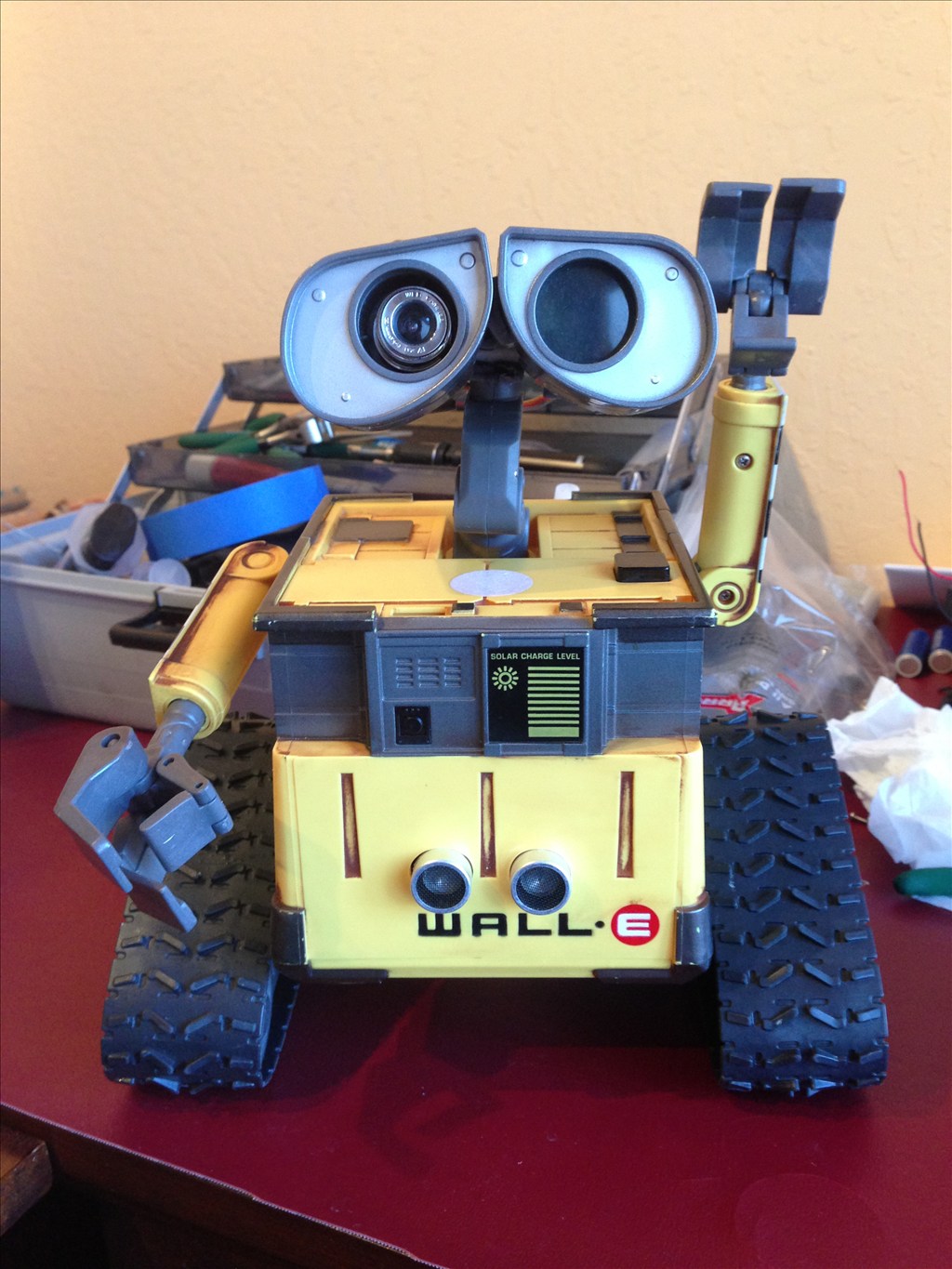 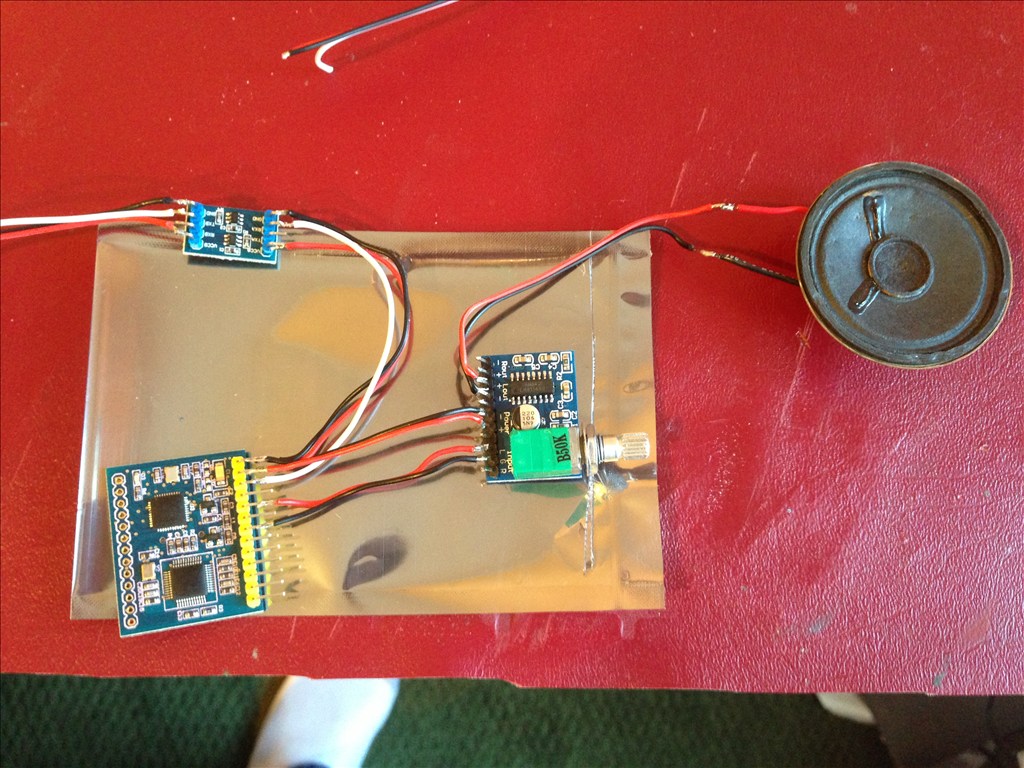 Well, I've been at a standstill on this guy for months due to parts issues and time constraints.

Got the parts, got the time. So, with no further adieu...

Image #1 shows the aftermath of converting the head to being able to nod. I thought long and hard about how I could keep the original eye movement mechanism, but after long debate (and lack of a good solution), I went ahead and removed most of the stock material and, using a micro 9 oz. metal gear servo, put a tube across the eyes and attached it to the top of the neck (modified to basically be a saddle for the tube). The servo is mounted in the left eye socket, and fits quite well. 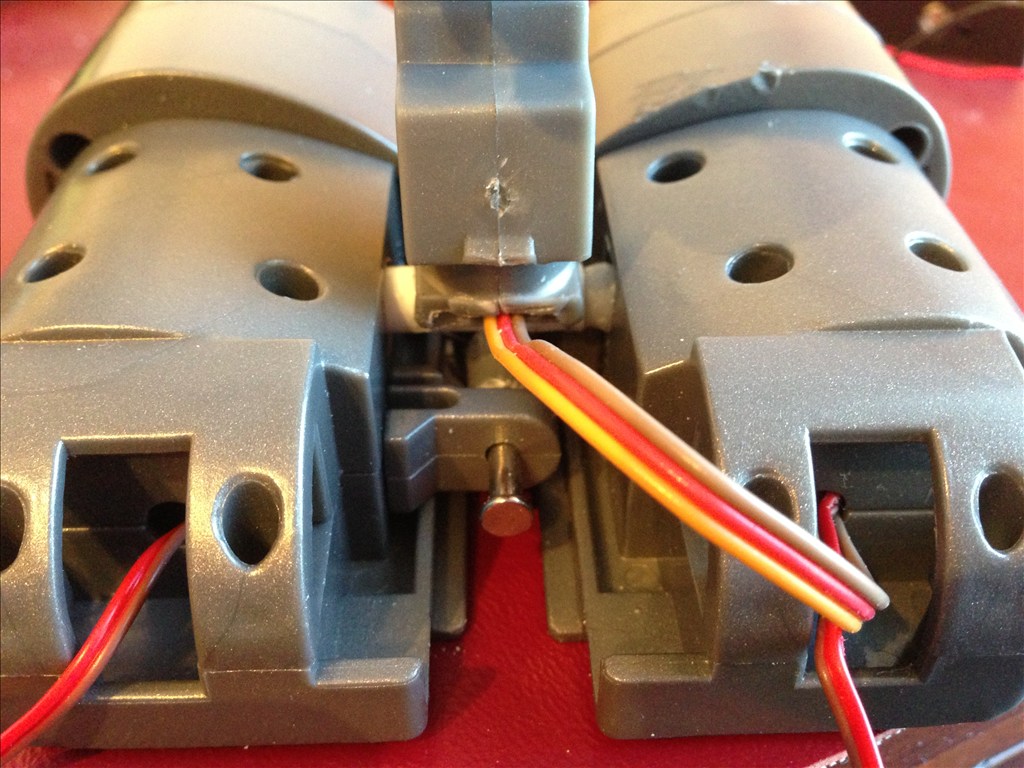 Image #2 show how I threaded the servo wire down the neck and hid it in the structure... 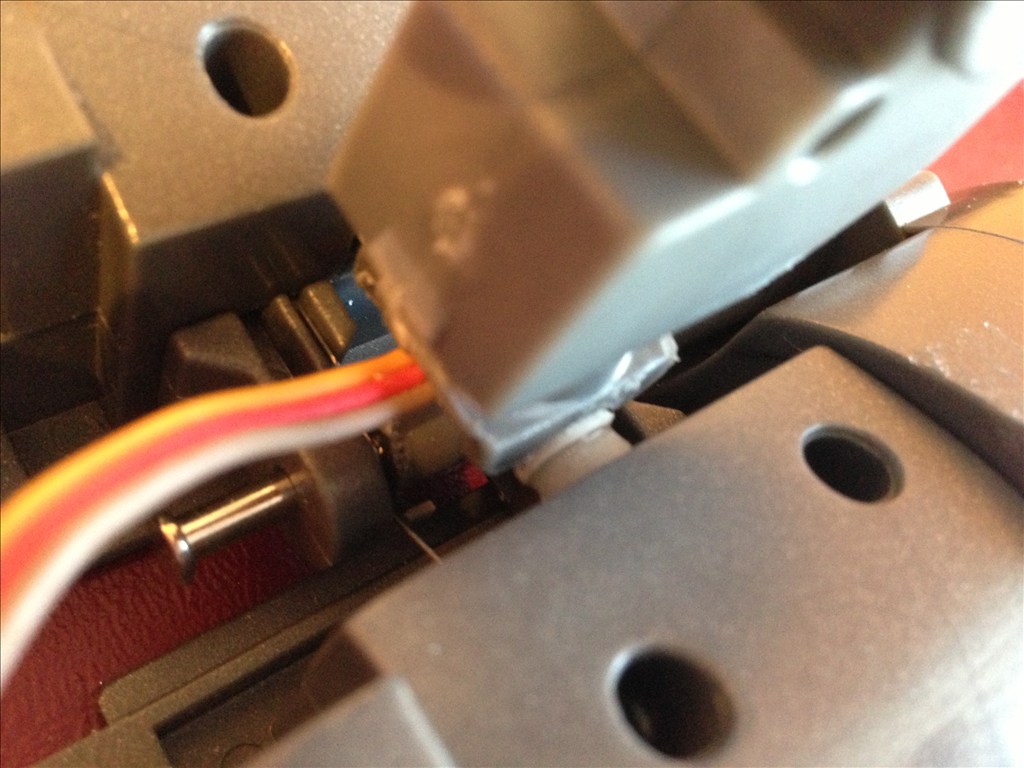 Image #3 shows where the servo wire comes out of the neck and goes through the rotation plate at the base. 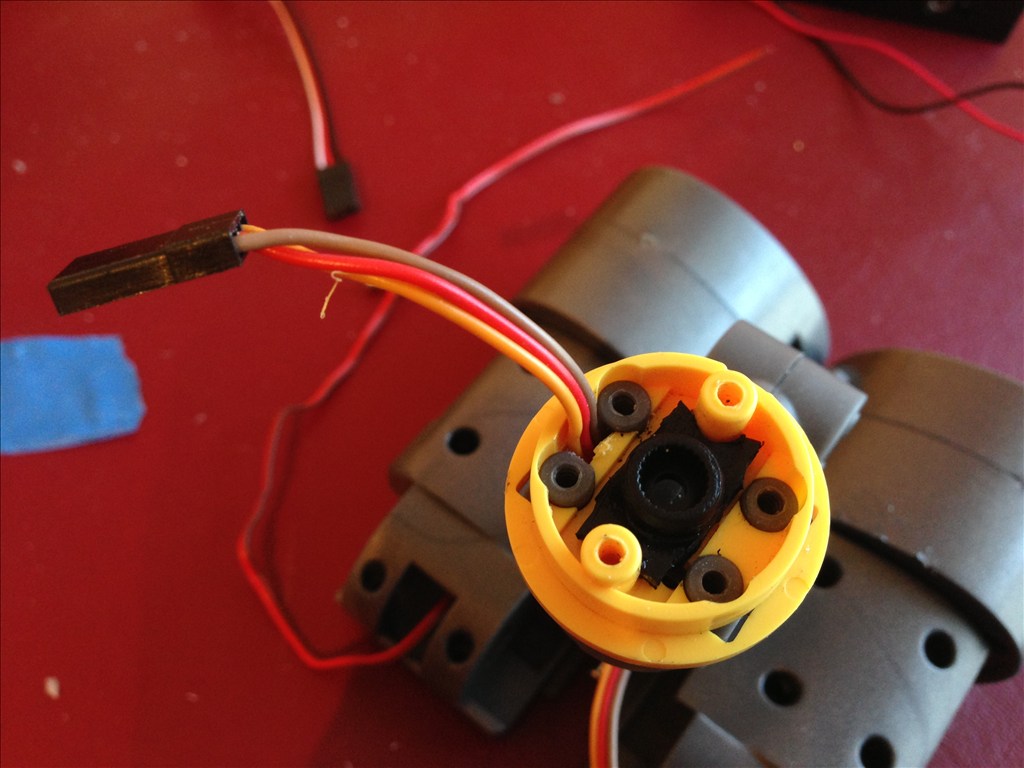 Images #4 shows that this wire now wraps next to the neck rotation servo mounted to a custom plate and uses the existing mounting holes.
You can also see that I have used those same micro servos for the arms. The good news is that with little grinding of material from the chassis, these servos fit quite well. The downside however is that unless these servos are under load, the weight of the arms (and head) tend to make them fall. I don't know how much of an issue this (yet...) 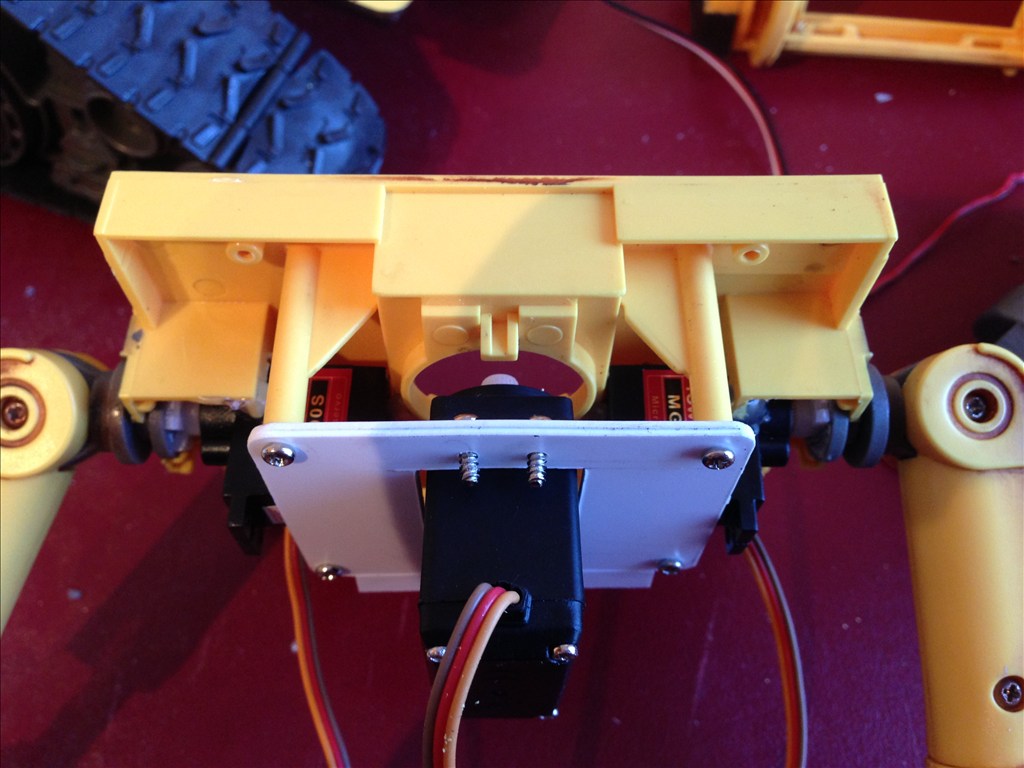 Image #5 shows how I was able to position the neck rotation servo perfectly under the neck plate. This is cool because it makes the presence of the servo invisible.(My Primary goal with all of the servos). 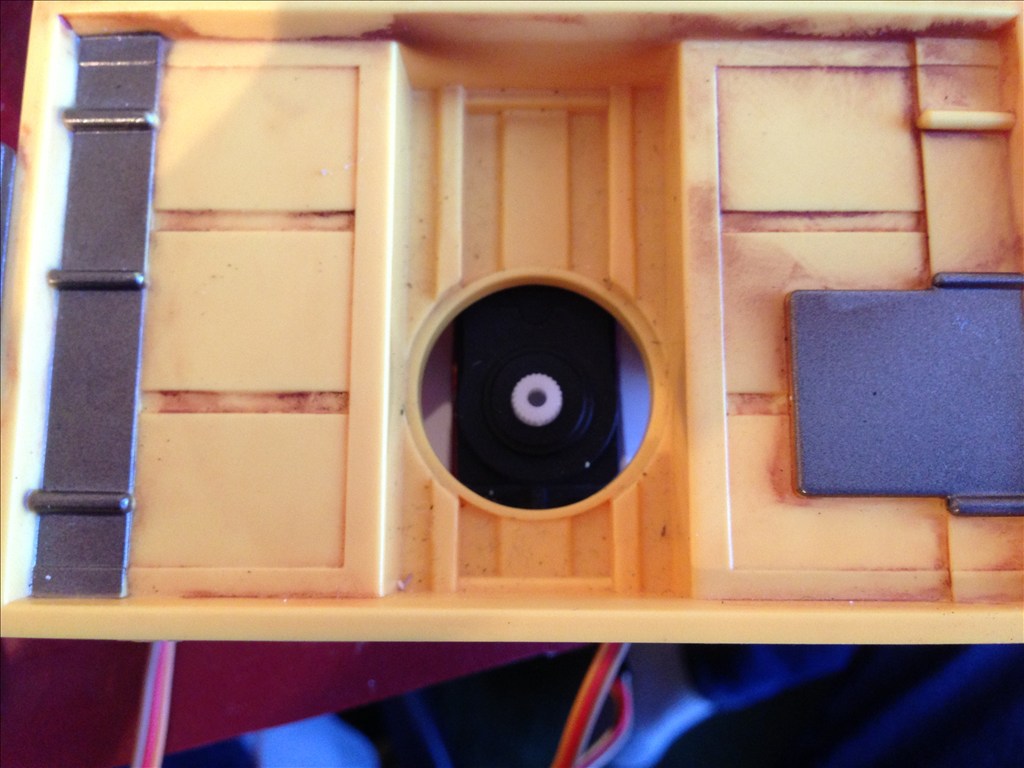 Image #7 shows the head and neck in place on the top plate with wires. 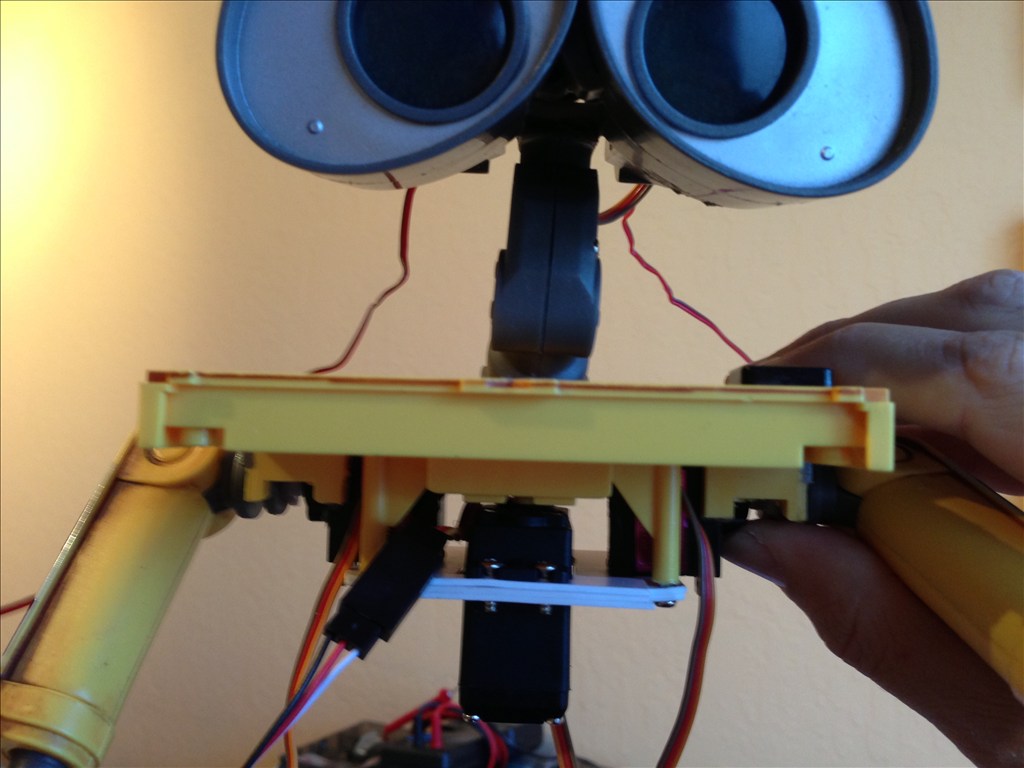 Image #8 shows the placement of the "ping" sensor. As you can see, I chose an interior mount rather than an exterior mount. This works OK, but not great. I looks good, but the distance to impact and rotation from obsticle will need to be modified due to the fact that the window in object recognition is smaller than the width of the robot, therefore, if he doesn't stop and turn enough, early enough, his treds hit the object. 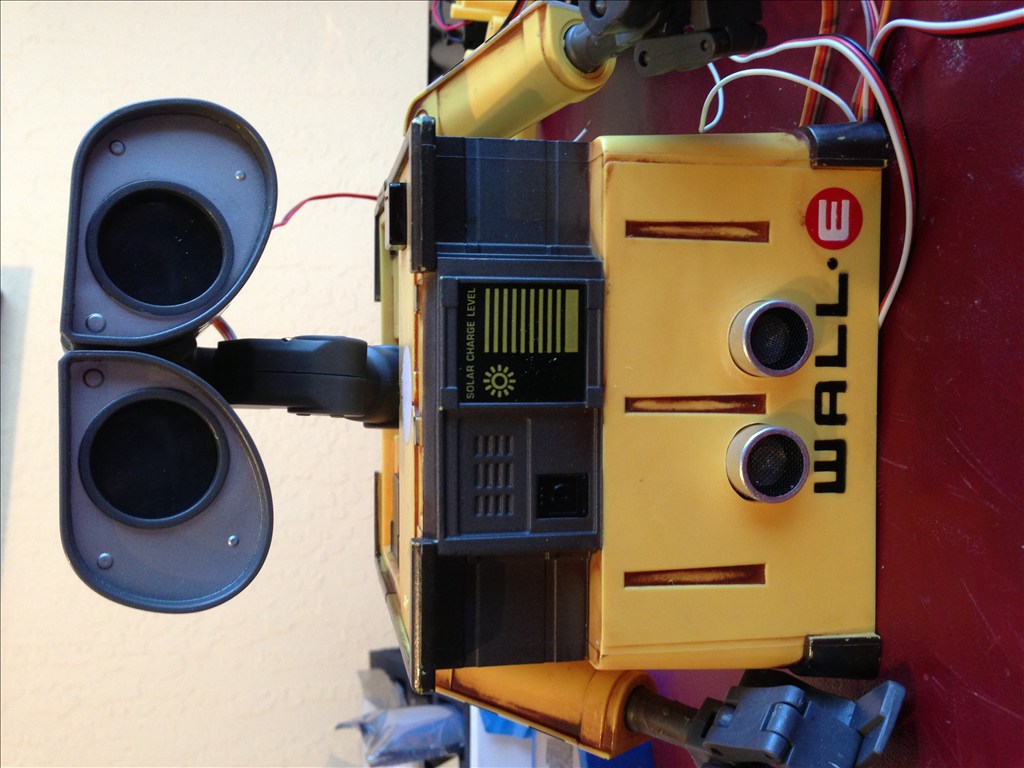 Image #9 is the camera mounted in the right socket. I would image this is the prototypical installation, so nothing to "see" here but to mention that I hard wired the camera. 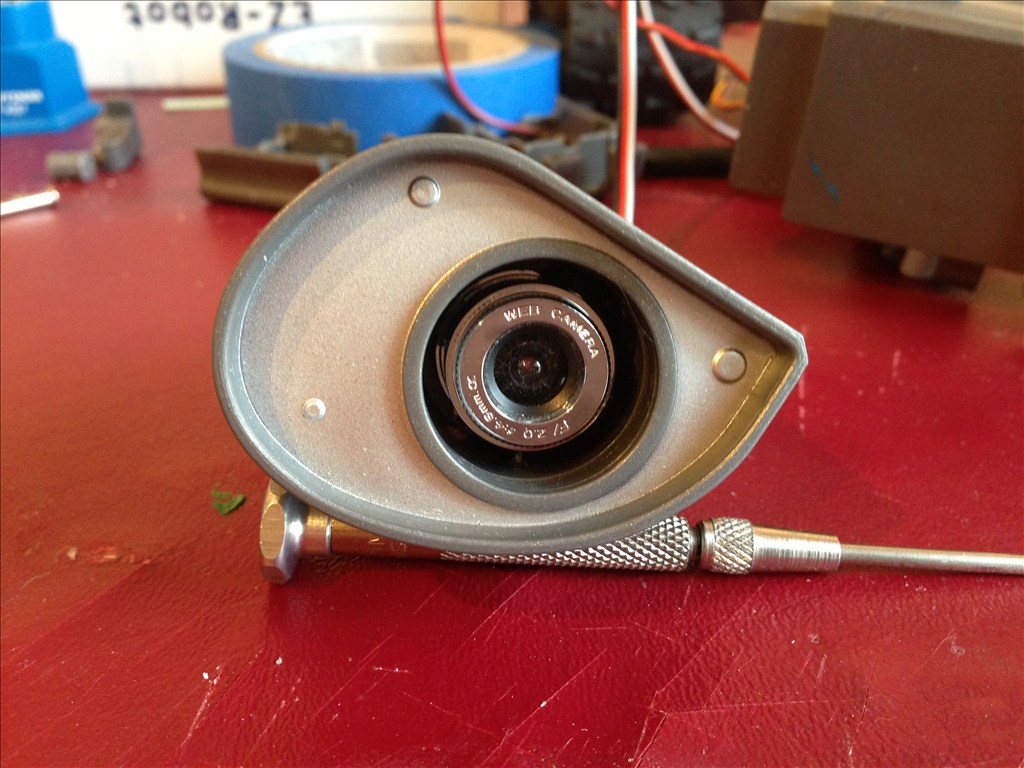 Image #10 is, finally, the other side of the camera mount. I found it EXTREMELY challenging to finesse the camera circuitry into the head unit. In fact, having had to remove all of the mounting holes in the plastic, I'm not quite sure how to reassemble it : ( 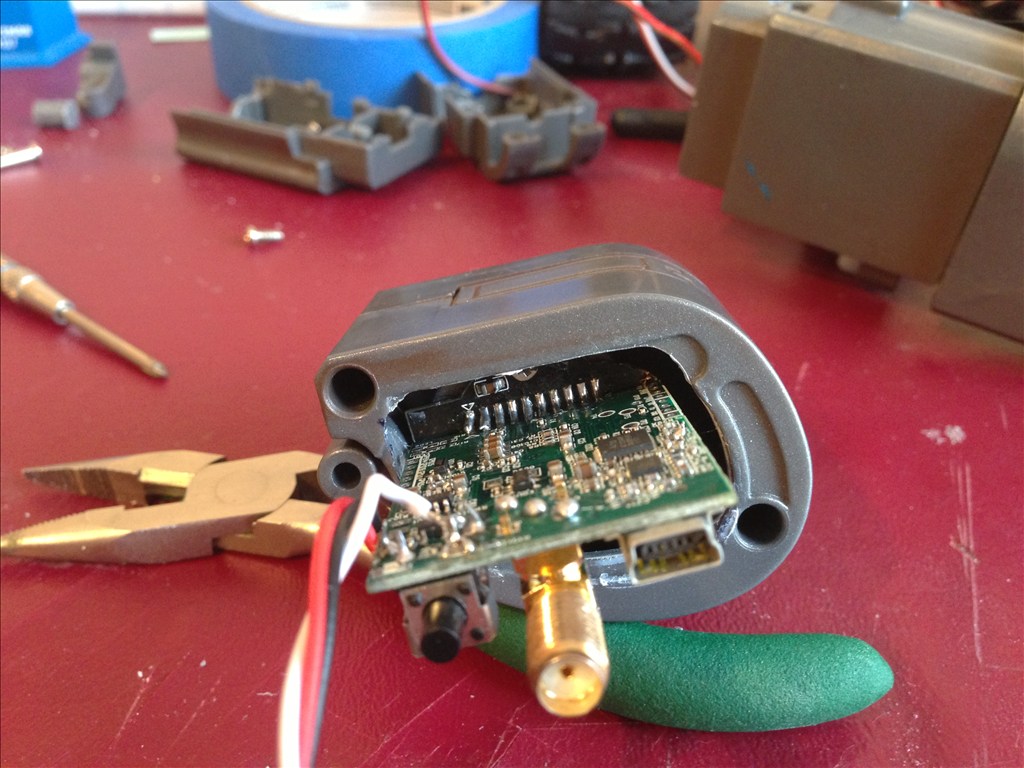 OK, that's it for this post. Next up is audio, and programming.

I removed the antenna mount, USB connector and switch from the camera. Made
it easier to clam the eye all back together. I extended the antenna leads and
relocated the antenna to Wall-E's body side.

cyberdude
USA
#3   Dec 2012
@lumpy, good idea. Since this is my first foray, I figured I'd get him all functional, and play, then decide next steps.

Antenna connector if you need new.

cyberdude
USA
#6   Dec 2012
Thank you. The battery situation is challenging because the drain is quite high and the 6 cells rain quickly.

cyberdude
USA
#7   Jan 2013
OK, So Wall-E is put back together (mostly). I stuck the supplied battery pack into the inner side edge of the body, but it REALLY doesn't last very long, so I have him tethered to a 6v Gell Cell for development purposes.

Here are some picks:

Here's his back. Yes, the board does fit in his back and I am able to close him up...but that rarely happens...

And here's one of the reasons why. I'm adding a new MP3 board. Damnedest thing happen to the first one I installed. Worked fine, but then lost serial functionality. The board initializes, but after playing the first sound automatically on init, I have no control. MDFly of course doesn't stock it anymore, so I got a different model from them. This one works the same way, but requires TWO voltage sources...One for the signal level line, the other to power the board. SO I took the little battery from the wireless camera (3.3 volts) and jury rigged it to work. Now I'm waiting for a hand full of 3.3v step down converters from China. I'll be able to put one in line with the 5v ext. power of the EZB and run it to the MP3 board (hopefully), otherwise, I have to run it from a second terminal set off the battery.

bret.tallent
USA
#8   Jan 2013
This is a very tidy build. I like how you have thought things out.

Since its really a test condition, its meant to be called as a routine from a larger general script, like a "wonder around" type of script.

I'll post the code in examples as "Boxed in".

*Disclaimer: I am NOT a programmer, so I make no claims to the cleanliness, clarity, buginess, etc. Use at your own risk.

Of course, you're welcome to improve it and tell me about it

irobot58
Canada
#10   Jan 2013
Awesome very inspiring cyberdude and Thanks for all the great pics!

Çhåøtìç_Røbøtïx
USA
#11   Feb 2013
Wow, that wall-e actually looks smaller than the U-command, i noticed you say its based off of it.
Can you tell me which Wall-e toy that was? Or if it is the U-command?

Okely Dokely, here's what we have...

4. Amplifier (the sound card is not amplified)

So the deal is that this particular sound card requires TWO 3.3v voltage inputs to function; one drives the comms signal, the other drives the circuit. I'm no EEE, so I have no idea why, I just know that I needed both.

All in all, it set me back something like $24 bucks not including the speaker and micro card (I had both laying around.)

Also, I should mention that one set of leads goes to a free port on the controller. the voltage-only leads go to the 5v out pins on the controller. I wasn't using them for anything else, so there ya go.
It uses typical serial comms.

R2D2
Spain
#14   Feb 2013
Very well explained, these contributions are appreciated, and a whole costs something like half the price of the trigger mp3 spankfun.
Does that mean that the communication via ez-b from any port makes digital?

cyberdude
USA
#15   Feb 2013
If I understand your question correctly, the answer is, the signal and signal voltage comes from and digital port. The second voltage can come from any port supplying 5v, but since there's a 5v for external power head, I used that for the second power feed.
Login to post a comment 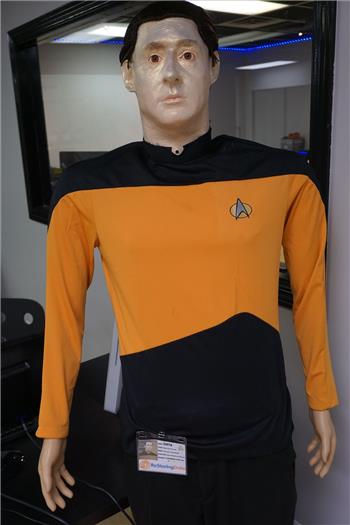 Name: Data This is a full-scale replica of Data from Star-Trek that I have built to entertain the clients of ReStoring... 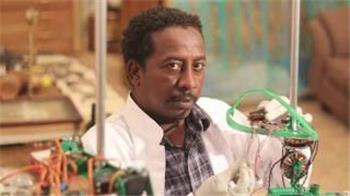 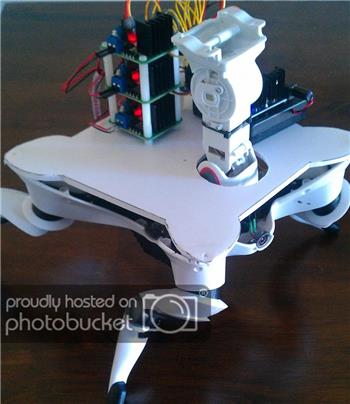 The Wowee Roboquad had a labotomy and now it's getting the hack de jour put to it... No remotes, IR codes, waiting,...