- When ez-bits are missing, do not allow user to SKIP. Now first time users must SYNC or CLOSE. Skip is no longer an option. 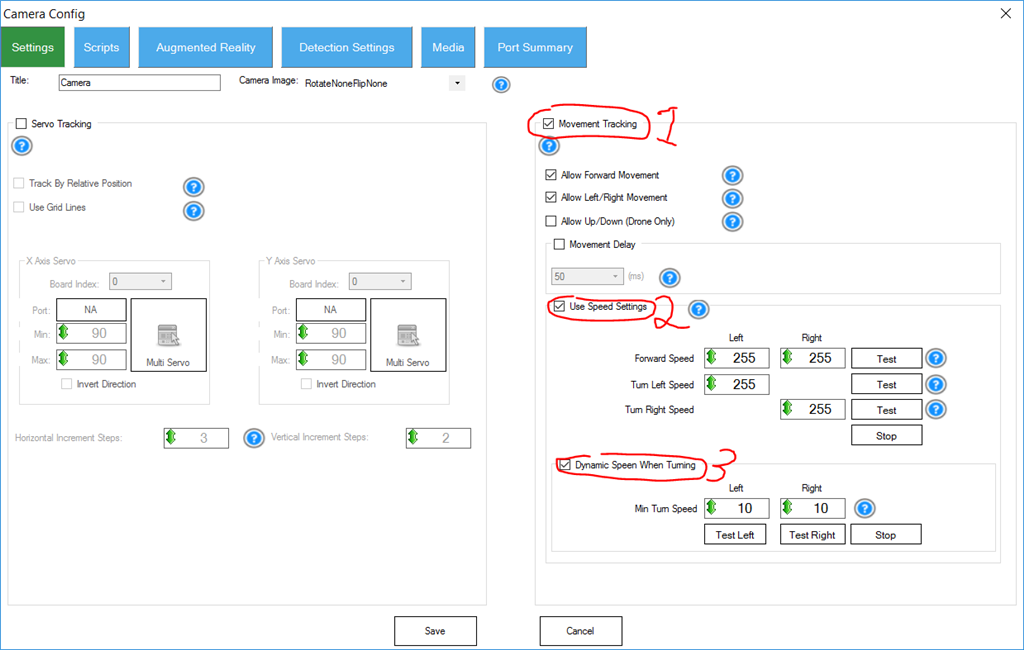 1) Enabling this checkbox instructs the camera control to use the Movement Panel and have the robot physically follow the object.

2) Enabling Speed Settings tells the robot to use the specified speeds when tracking with the movement panel. Forward, Left and Right speeds can be specified and tested here.

3) Enabling Dynamic Turning will have the robot turn toward the object at a variable speed. The values in this area are the SLOWEST speed the robot's wheel will turn in that direction. This means SLOWER = MORE TURNING. The further the detected object is from the center grid lines, the faster the robot will turn. Having this number as low as possible is usually best. For Roli, it would be set for a 1

Here is an example of the robot USING dynamic turning. Notice how the robot continues straight while tracking the object...

Dunning-Kruger
Canada
#1   Jun 2017
@DJ Nice work! As usual. These refinements in steering and navigating are really going to benefit IPS especially....Until recently I didn't think it would be possible but I really think I can have an inMoov or inMoov type robot serve drinks at one of our (Sue's) house parties. I mean actually do it and not be just be a novelty or topic of conversation because it just looks cool... I keep saying this but I will be doing another video eventually on this kind of theme... Thanks for your hard work...

jstarne1
PRO
USA
#3   Jun 2017
ah dynamic turning, can this apply to a custom movement panel? Like a robot moving forward but then turn SOME to the right without stopping. Similar to how you would expect a rc car to gradually move left or right as it is already going forward?

#4   Jun 2017
You described what dynamic turning is. So I'm uncertain about the question.

Dunning-Kruger
Canada
#5   Jun 2017
@DJ I pretty much get what you saying... So let me get this straight... In the instance of using the custom Movement Panel (not the built in sabertooth movement panel) with a sabertooth controller (this is usually my setup). In order to use dynamic turning I will have to use or manipulate GetSpeedLeft() and GetSpeedRight() variables in order to drive the sabertooth channels correctly... Or just use the built in Sabertooth control? Do I have this straight?

The speed ability is what allows the robot to dynamically turn.

A robot cannot dynamically turn if the wheel speeds cannot be controlled. The only way a robot can turn without wheel speed is to stop the wheel.

This will work nicely with my roomba's too...

Dunning-Kruger
Canada
#9   Jun 2017
@DJ I am not sure about the built in roomba control as I mostly use the custom movement panel. But yes, the Roomba does use speed control... Even if it doesn't exactly match up to GetSpeedLeft() and GetSpeedRight() simple math will correct for variations...

If there are two speed sliders on the roomba control, then it supports two speeds and will work with dynamic turning.

Dunning-Kruger
Canada
#11   Jun 2017
@DJ The Map() function could be useful when 3rd party hardware doesn't match 0 - 255 as a speed control. Anyway, I think your dynamic turning ( and ez scripting) is pretty flexible and probably can be used with any 3rd party robot or controller... A little bit of math never hurt anyone...

Dunning-Kruger
Canada
#14   Jun 2017
@DJ Here is a project I created when I was messing with roboRealm for visual navigation. It should provide you with info on how I use the custom Movement Panel and getting other info from the roomba... I am a little embarrassed because I am a little bit of a messy coder... :)... Let me know if you need anything else...
Create_2_Mapping.EZB

Map( input, inputMin, inputMax, containerMin, containerMax )
Returns a scaled value of input between containerMin and containerMax. Specify the known input’s minimum and maximum values, and the known container (output) values. For example, if you were to scale a value between -1 and 1 to 0 and 180, enter this, which returns 135.
Example: $x = Map(0.5, -1, 1, 0, 180) 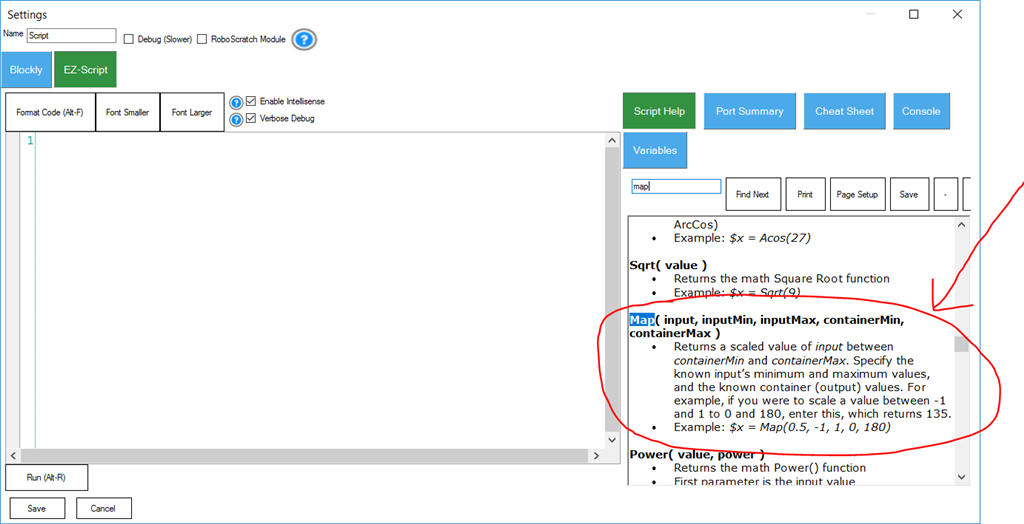 merne
USA
#17   Jun 2017
@DJ, thanks for this new release. You've been pumping these great releases out, it will take me 3 more years to caught up. :). You must have figured out how to clone yourself.