Tomorrow is a big day for me because I'm going tubing. I meant for this release to be for December 31st, so you'll have to accept it being a day early. Oh, isn't that rough?

So I've been on holidays - which means more time spent on new features. I seem to be the most inspired when I am on vacation *shrug*. In this case, it's a pretty big deal to EZ-Robot users. Specifically regarding the Mobile ARC.


Mobile Interface Builder
Now everyone can make Robot Apps for your iOS or Android mobile phone or tablet - without programming!

Introducing the Mobile Interface Builder with Drag'n'Drop functionality for creating robot apps for your mobile device!

There is a new control under Add Control in ARC located in the new Mobile category. This new control is an interface builder for mobile apps. By default, if you do not have any mobile interfaces, the default ARC Desktop #1 will be displayed. However, if you use the Interface Builder to build apps, you can specify which interface will be displayed.

*Note: You may specify which control is default displayed in the Project Details menu. It doesn't have to be a Interface Builder. It can be any control - Camera, Wii, Script, Connection, Etc.. Just specify by it's name.

The interface builder configuration menu allows you to specify a background for your robot interface. Then, start adding buttons for a variety of features. For example, there are buttons for movements, scripts, connection, camera, sliders and more. Each button actually acts as a script, so you can add EZ-Script to the button press. If your script loops, the button will turn red for when it is running. Press again and the script exits.

All of the features are testable in the Windows ARC - except the Camera view. This is because the camera view in ARC displays in it's own viewport already. It can't display in two separate places, that's just silly 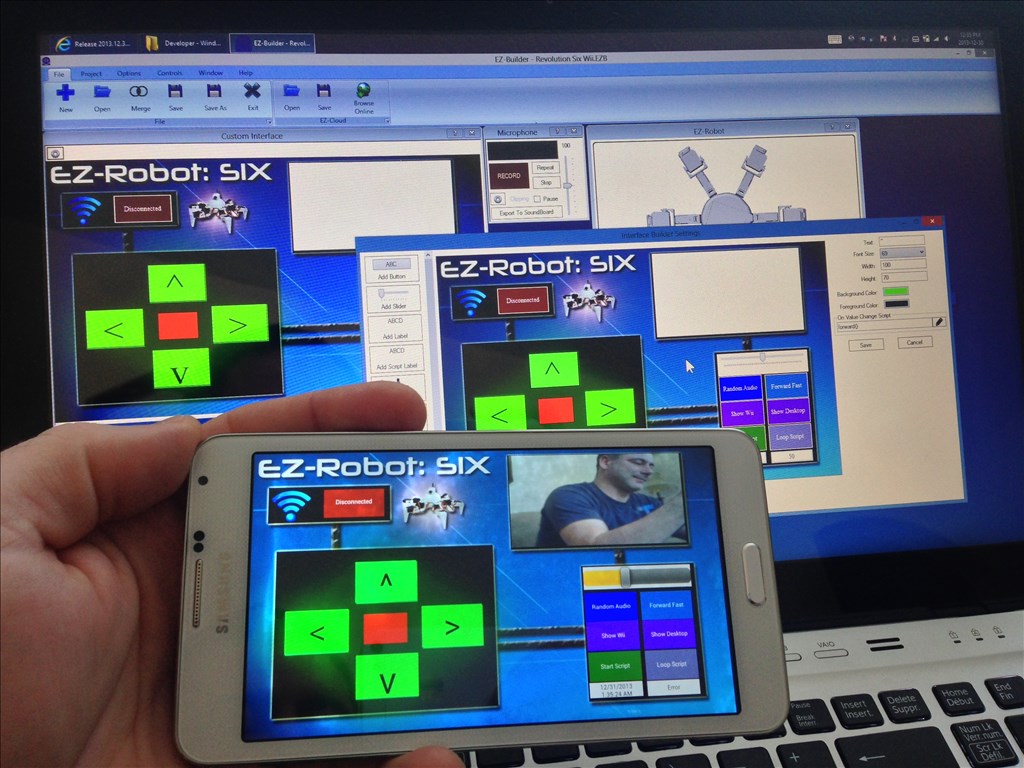 I included the demo app from the photo above in the Examples\Mobile Apps folder.

The mobile version of ARC does not require a computer. It is a standalone application that lets you control your robot from your mobile device.

#1   Dec 2013
Nice, I come back from a short break of my own and find this to play with (after I've had some sleep! and caught up on the forums)

#5   Dec 2013
Is there an app that interfaces with ARC? How are you viewing it on your phone? http connect?

jstarne1
PRO
USA
#6   Dec 2013
Great that looks useful , since we have limited real estate on a android device screen

Also, this is the first time I have had an install issue with an update, but Windows 8.0 came up with an installation message stating I needed to manually uninstall the previous version first. I did that and installed the new version fine. Did anyone else have this issue?

It only works with EZ-B v4, however. I'll be releasing it for Android in the next week or two for beta preview. The iOS version takes longer due to Apple iTunes review process...

#9   Dec 2013
@Justin I had to uninstall first too. @DJ Thanks, looking forward to Android app

#13   Jan 2014
I was playing with the mobile app maker and I can't change the main background color. The color picker doesn't pop up. I can add and remove a picture. I also can change the color of the buttons

I can't wait to be using all of this stuff for real with my Roli.

irish_dancer
Poland
#14   Jan 2014
DJ Sures it's amazing like always but it is a great revolution for us again - thank you very much for such gift in new year :-) Our robots can be realy independent because everybody has android or ios in own pocket :-)
Login to post a comment