Get ARC
This is a small release regarding Random features of your robot. There was a recent discussion about what "random" really means in programming. Random() is a common function used in computers making unpredictable decisions. However, if you wish to write your own routines for random behavior, perhaps Random() isn't optimized.

As a disclaimer: We encourage people to use the Personality Generator, which uses an algorithm based on trending - not random.

So, the solution? After a bit of brain storming, I came up with a new Random function called GetRandomUnique(). This new function tries to make the returned value unique from the last. This is not a Personality Generator replacement, but it will make your robot much better behaved.

Here is an Example Project displaying the differences between Random() and GetRandomUnique(): Example-Script-RandomNumberFunctions.EZB 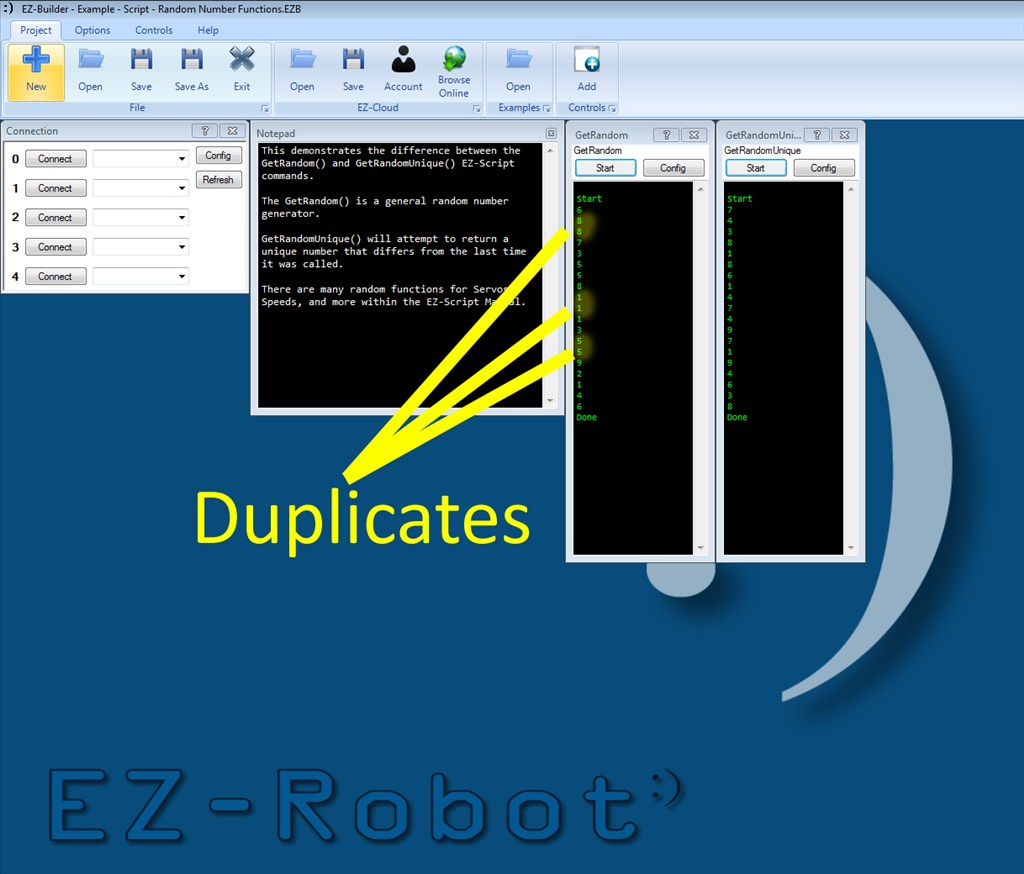 charleybot
USA
#2   Nov 2012
ROFL!
@ DJ - I don't know how you do it without losing your mind, there was a huge argument last year with a bunch of programmers over the randomness of random, and let's just say there wasn't enough alcohol in the world at the time....

Thank you for the update


BTW would this be a bad time to ask about SendSerial text string issues?

Louis T
USA
#3   Nov 2012
Nice job once again. I was looking to create a full keyboard control for my robot but I can't find how to assign the different keys to control different script or mutli-script simultaneously. Is this something not yet implemented? The only thing I can use on the keyboard is the movement panel.

irobot58
Canada
#7   Nov 2012
AWESOME! thank you for the update. I was wondering why the Program Generator was not really random..BUT you did say it was a "Quasi-random". ........Thanks for your amazing effort!

#8   Nov 2012
Thanks again DJ.
This will keep my robot from repeating the same thing too often and still mix things up a bit.

irobot58
Canada
#9   Nov 2012
I understand the varibles are numeric but can they also be strings with the examples given. I realize this thread is not about programming but a simple yes or no can send " my hounds in the right direction" . Thanks in advance.

I was playing around with different spoken words and phrases before this new command... that worked fine, and now it is even better

Here is a simple example... My coding abilities are 30+ years out of date

Funny and much better use of variables and code layout... I'll relearn eventually

charleybot
USA
#13   Nov 2012
@DJ, I just tried the SendSerial tonight with the latest release, it's working without locking up, and I can now send complete sentences without any problems.

You must of done something or is it me?

#14   Nov 2012
@charleybot nothing was changed. glad to hear it works for what ever magical reason

Yep after 4 years I'm finally getting to the point where I'm working in random routine responses into my robot. I ran into an odd occurrence with my scripting so I dug up this old thread talking about this function.

Anyway, I've written a script that will randomly choose a sound clip from a randomly chosen actor. In the actual script, each actor is divided into their own subsection. In this actor's section are commands to play sound files that will be randomly chosen. Clear as mud?

The problem is if I have a list of choices the last on in the list will never get picked. This happens with either the GetRandomUnique() or the GetRandom() command.

For example if I've written $response = GetRandomUnique(1,4) the 4th number will never generate.

I just had a thought; Is it the way I'm starting my numbering system? Do I need to start with 0?

Here's my code so far. Works pretty good except I can never get the last choice on the list to get picked. Any ideas? Thanks.

#17   Feb 2017
As per Random() functions in programming of all languages that I am aware of, the range of return values includes minValue but not maxValue.

So, to randomly get a number between 1 and 4, you would use GetRandomUnique(1,5)