- new Camera Variable: $IsCameraActive which returns the status of the camera. Can be configured to a custom variable name in the camera config dialog

#2   Nov 2014
This is very useful. I had a camerastart ControlCommand() in my init script, and if the camera was already running, it would crash ARC (no errors in the debug log).

Now I have an IF statement to see if the camera is already running, and no more issues.

#4   Nov 2014
Sorry just downloaded ,, thought i had it ,, Thank you @DJ Sures for the update I have been waiting for this so i can continue and once again you come through!

#5   Nov 2014
Hmm.... Actually, $IsCameraActive is only initialized once the camera has been started at least once. So if I have just opened the project, and haven't started the camera yet, I get an error in the log "Variable Not Defined $isCameraActive".

If I have started the camera at least once, then the IF statement to check if it is active or not works.

I don't see anywhere to do that.

#7   Nov 2014
I tried (actually, since the whole issue is I am trying to see if the camera is on or off, and 0 is off, I set it to 2 then had the IF statement looking for != 1) but I guess since the IF statement is also in the Init script, it is still seeing it as undefined. I guess I need to create another script, and call it with control command.

#8   Nov 2014
Calling the script that checks to see if the camera after setting the IsCameraActive variable to 2 eliminates the undefined variable error, but if the camera is active, when the init script runs, it sets the variable to 2, and then the script causes the nasty error that sometimes crashes ARC when I run the ControlCommand() to start the camera.

Usually crashes ARC without the error getting written, but this last time it just threw the error without crashing. 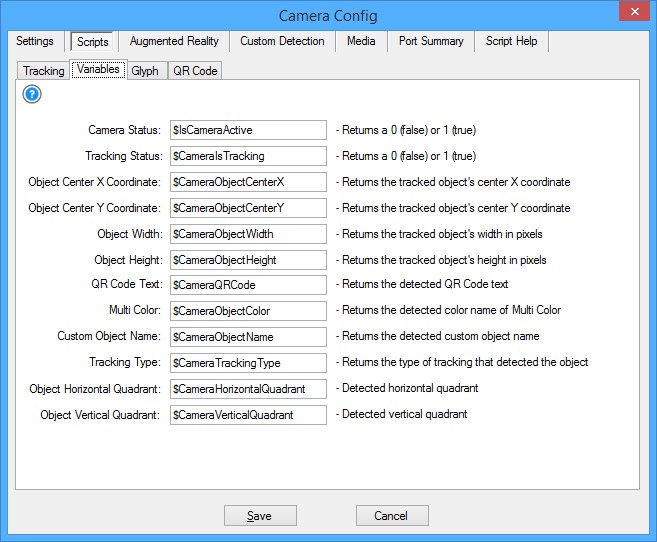 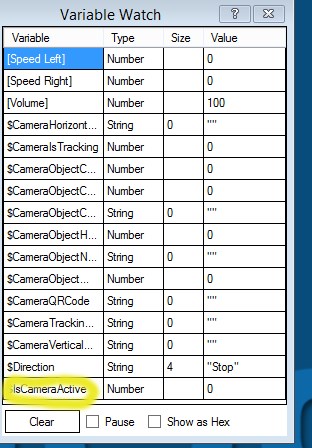 Dunning-Kruger
Canada
#10   Nov 2014
I knew about where to find the list of various control variables, but thanks for letting me know not to mess with setting them via initialization type scripts... Good to know... thanks

#11   Nov 2014
Have you added any delay prior to the IF to make sure the camera control is loaded before checking if it's running? As DJ said, the variables are there on the control being loaded.

Dunning-Kruger
Canada
#12   Nov 2014
That's a really good point @Rich.... Some complex controls I assume need extra time to load... ARC being a multi threading program means that running scripts may not wait for those controls to load...

#13   Nov 2014
Yes, there is several seconds of delay throughout my initialization script, and I was attempting this on the last step.

I have figured out the sequence of events that causes the issues.

1) If I start ARC and open my project before starting Roli, the camera fails to initialize, so the variable is not initialized (none of the camera variables appear in variable watcher, and the script using the IF statement fails).

2) If on the other hand, Roli is started before opening the project, the camera initializes and starts, but if I run ControlCommand("Camera", CameraStart) and the camera has already started, then ARC intermittently crashes.

There does not seem to be a way to use the variable to check the camera status if the camera has not already been run at least once in this session.

However, I think I found a solution.

Running ControlCommand("Camera", CameraStop) when the camera is not running records errors in the log, but so far has not crashed ARC, so I will add this to the end of my initialization script:

#14   Nov 2014
From memory (which is fuzzy at best right now) is there a toggle for the camera start/stop? Possibly use the ControlCommand for toggle twice in quick succession may kick the variables in for the camera and allowing the IF to work and avoiding stopping a stopped or starting a started camera control.

#15   Nov 2014
There is not a documented CameraToggle (there are toggles for tracking, recording, etc). But now I can't find where CameraStart and CameraStop were documented other than forum posts by DJ and others. They aren't in the list of ControlCommand parameters in the script reference.

I'm unable to reproduce similar results. The code initializes the variables when the camera control is added to the project - whether active or not...

Alan, certain you have the most recent version of ARC?

I'm unable to reproduce similar results. The code initializes the variables when the camera control is added to the project - whether active or not...

Yes, I have the latest version.

If you think it might be project related, mine is on the cloud. name is "myroli" (original, I know) and it is tagged as rovers, incomplete.

I can test later today on different computers. The one I was doing most of the testing on is Windows 7 Professional (64 bit), but I can try on my Windows 8.1 tablet later.

#18   Nov 2014
I confirmed that opening my existing project on Windows 8.1 has the same issue. Adding a new camera to a new project, all the Camera variables do appear, but when I save that project, stop ARC, restart ARC and load that project, no Camera variables appear until the first time I successfully start the camera for that session.

While I was testing, you released version 2014.11.18.00 so I installed it and re-tested with the same results.