Dust off your 3D Printer because now it has a purpose. The time to change the world of robotics has begun... With EZ-Robot Revolution!

Revolution is not just a new product. It is a community of sharing, growing and learning. Most importantly, creating really awesome robotics, easily! Revolution provides an online library of 3D Printable parts (EZ-Bits), 3D EZ-Robot Designer, online storage of apps (EZ-Cloud) and brings it all together with our amazing robot control software (ARC).

Until now, the challenge with robotics has been a segmentation of hardware, software and components. EZ-Robot is the first company to successfully unite advanced robotic features, easy graphical design interface, video tutorials, reliable robot controller hardware, and now a modular platform.

Revolution is the unification of robotics!

Revolution introduces a new flexible modular platform while maintaining and supporting community creativity. This is done through a new EZ-Cloud library of 3D printable robot parts called EZ-Bits. EZ-Robot is committed to continue designing modular EZ-Bits for you to assemble beautiful and functional robotics. To support the community's creative engagement, we have integrated a 3D design feature which enables you to submit your own EZ-Bit creations.

With the support of our strong community, we will grow our library of 3D printable EZ-Bits for the world to share! Imagine the impact this moderated collection of compatible 3D printable robot parts will have on education, industry prototyping, and hobbyists.

The world is ready...

Let me be the first to introduce to you, EZ-Robot Revolution!


Project Menu
The project menu provides you with the tools to create an EZ-Robot. Add controls for custom behaviors, 3D design and 3D print your EZ-Robot parts. 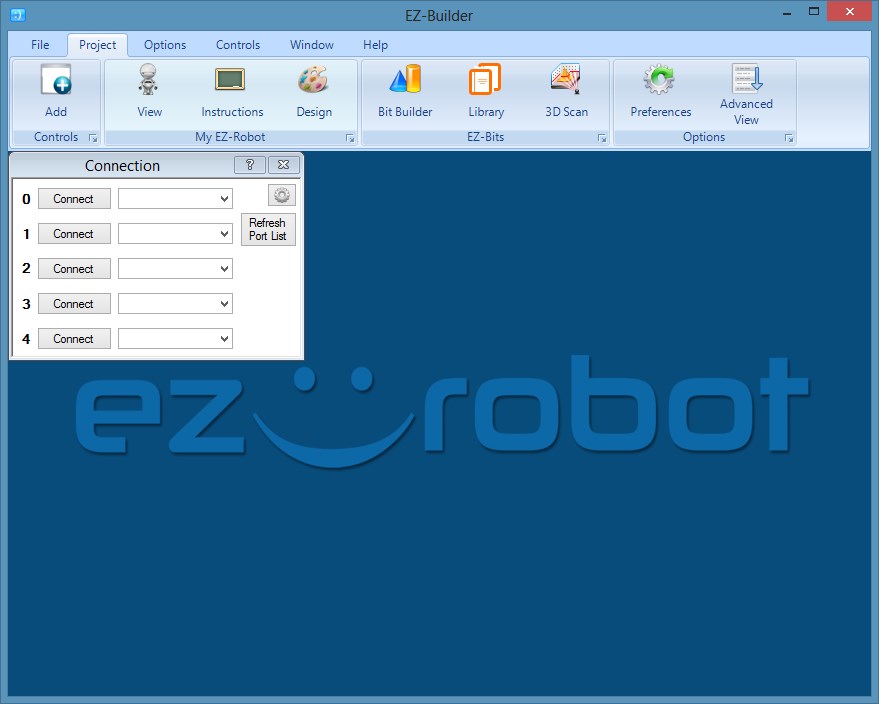 Examples
Projects can be opened with the File Open menu option. Here you are presented with Revolution example robots (Hexapod codenamed Six and a Biped codenamed JD). You may also browse the subfolders to load projects which provide examples of EZ-Script syntax and functions. Many more Revolution EZ-Robot examples to come! 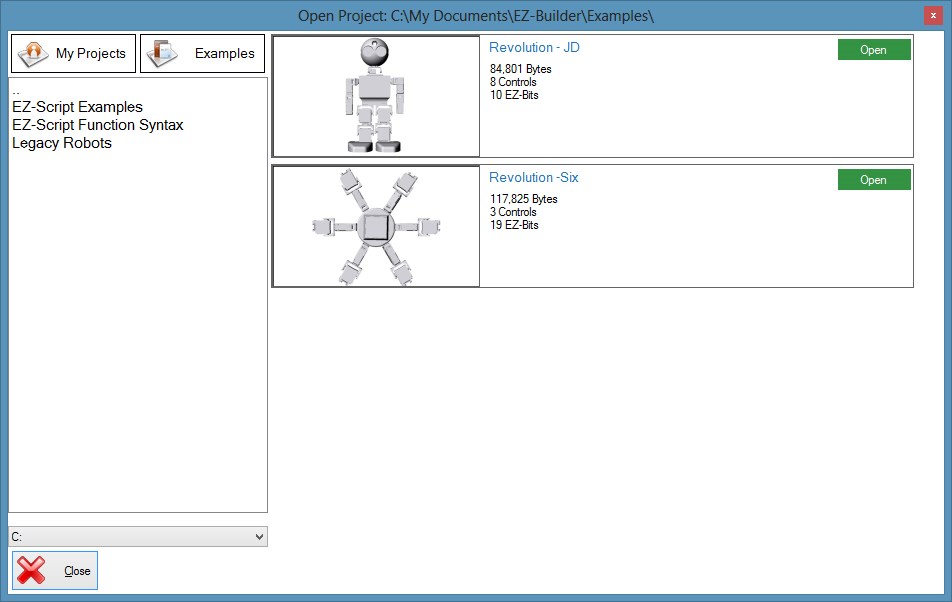 Revolution Projects
A robot designed with Revolution EZ-Bits will require the files to be cached on your computer. If the files are missing from your local library, you will be prompted to start the sync utility to download the missing files. The project will not open unless the EZ-Bit cache files have been downloaded.

Downloading EZ-Bit Library
The EZ-Bit Library Sync utility will synchronize your local library with files from the server. Pressing the Sync Now button will begin the process. EZ-Bit cache files range in size from 200K to 3MB, which means the process time depends on your internet connection speed. 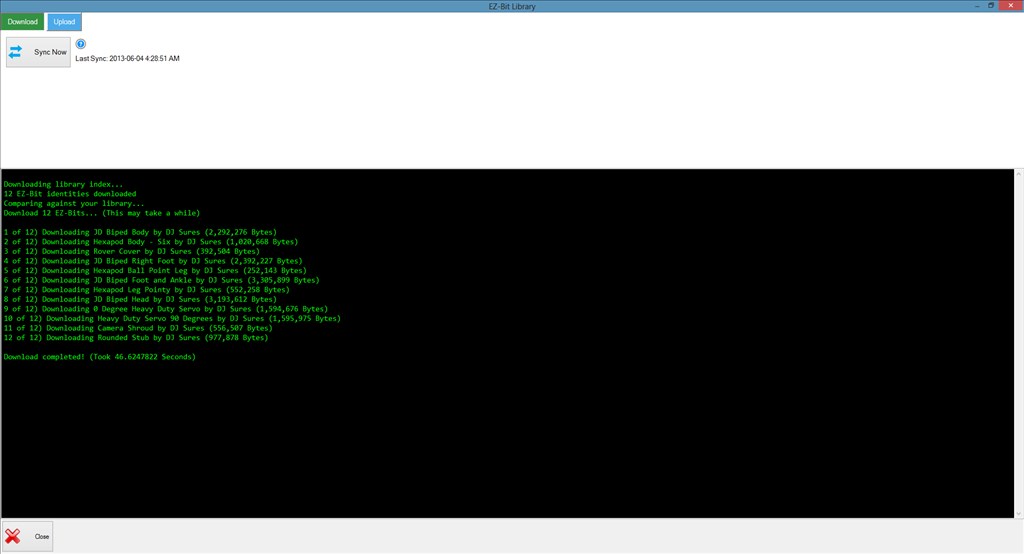 3D Animated Assembly Instructions
By choosing to view the assembly instructions, you will be presented with a new window. In this window, you are given control to browse through steps of the EZ-Bits with detailed instructions. The instructions tell and show you where to connect the EZ-Bit and what ports to use on the EZ-B. 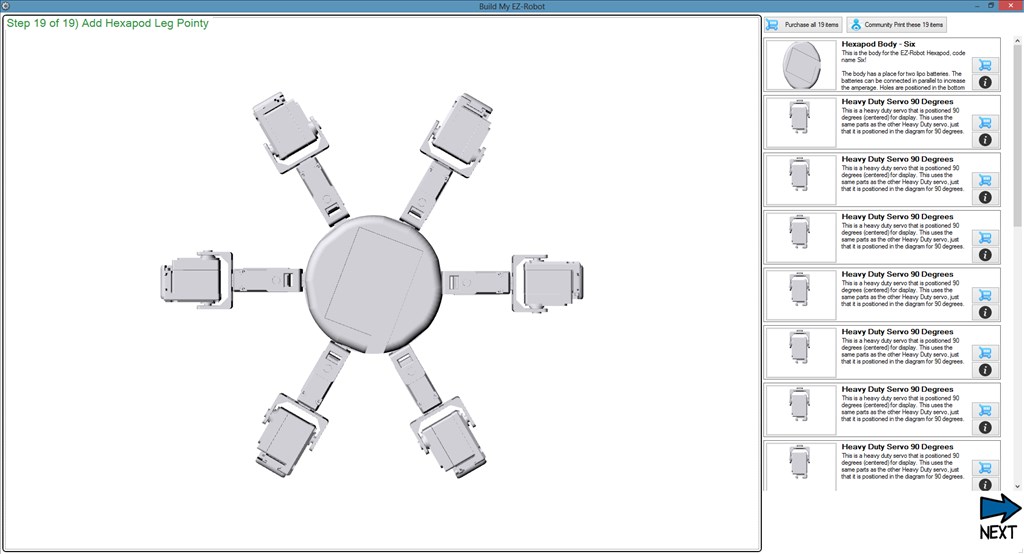 EZ-Robot 3D View
Once in the project, the EZ-Robot control gives you a 3D view of your robot. In this example, the AutoPosition control comes in handy to create GAITs and movements for your robot. 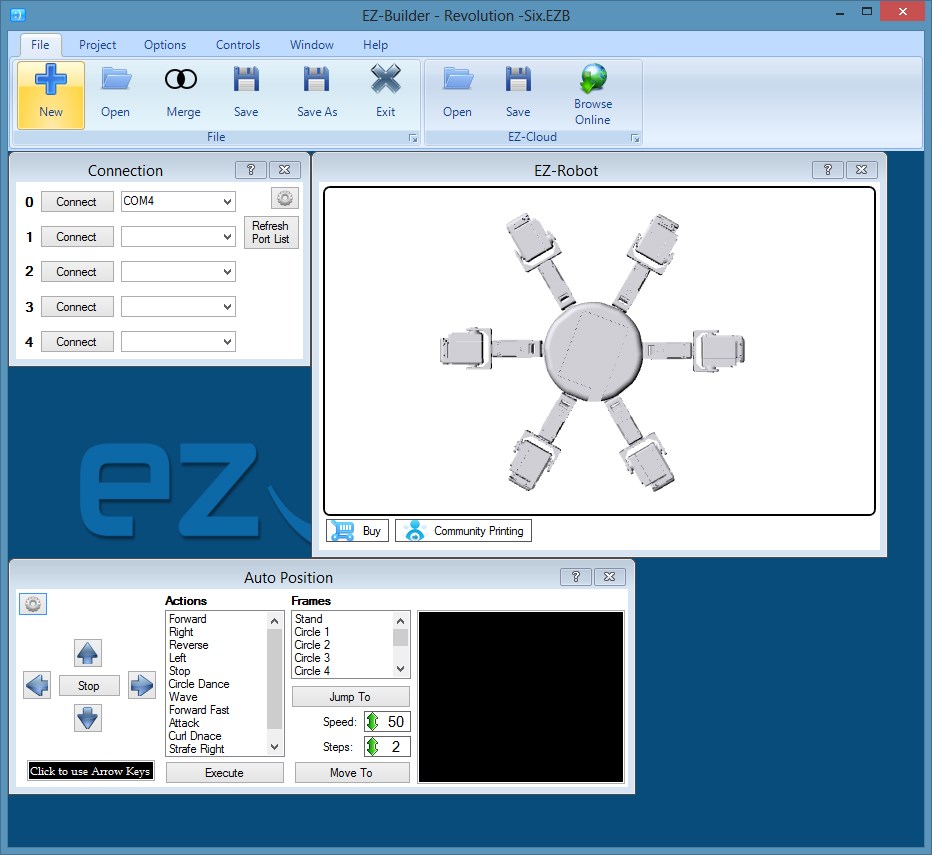 EZ-Robot 3D Design
When it's time to create your first EZ-Robot, the 3D Design mode makes it easy! Use EZ-Bits from the library to build your robot. Each EZ-Bit will have a property tab which allows you to specify a friendly name and EZ-B connections. This information will be used throughout your robot configuration and to generate the auto assembly instructions. 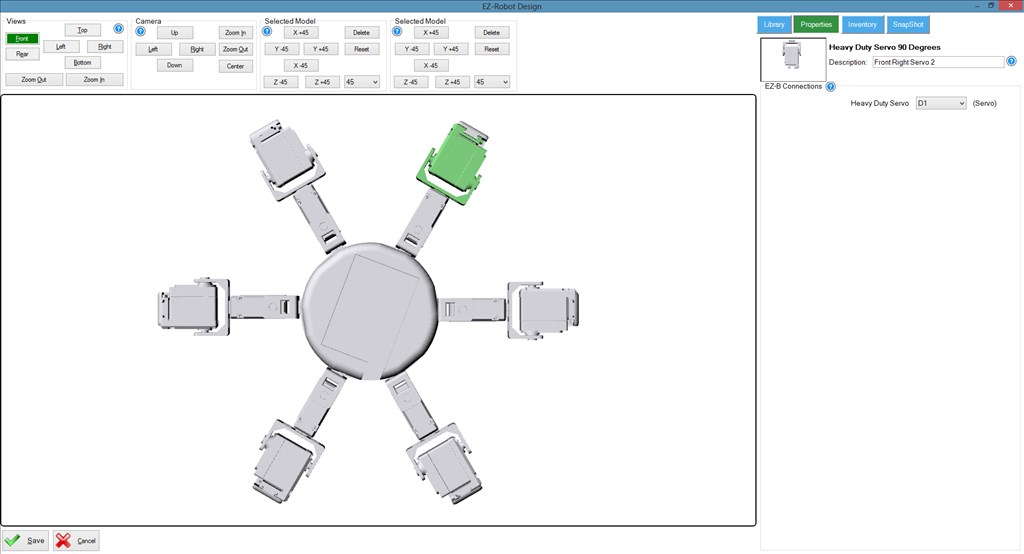 EZ-Bit Designer
Adventurous robot designers can create custom EZ-Bits. By importing the STL files generated in your favorite 3D design software, you can assemble all the parts into one EZ-Bit. Each STL file is saved within the EZ-Bit and can be used for 3D printing. 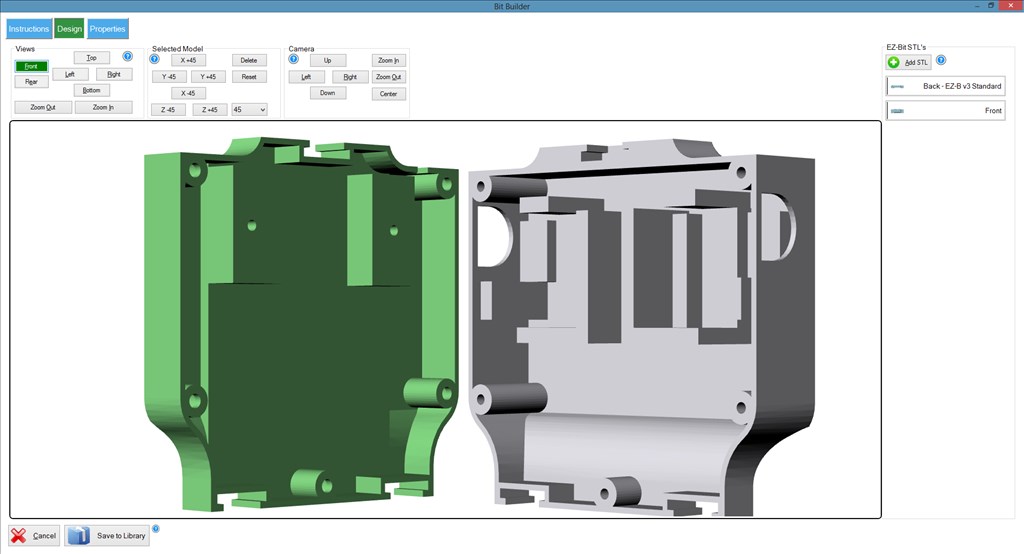 EZ-Bit Profile
Before saving your EZ-Bit, you are prompted to complete a simple form. Give your EZ-Bit a title, detailed description, and 3D printer settings. This information will help you and others around the world 3D print and use your contribution with their EZ-Robot! 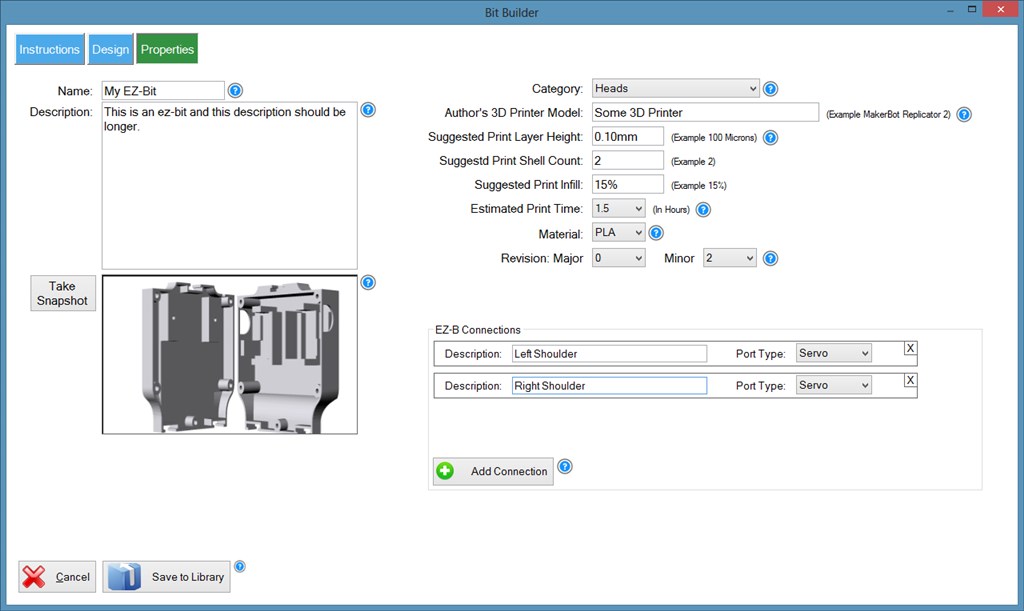 3D Printing and Community 3D Printing
The information button on each EZ-Bit will provide you with access to the raw printing files. From here, you can launch your favorite 3D printing software to bring the EZ-Bit into physical reality. For those without a 3D Printer, the Community Print option will come in handy! Coming soon, the EZ-Robot Community Print Network will help you locate someone to 3D print the parts for you. Additionally, a selection of EZ-Bits will be available for purchase in the store. 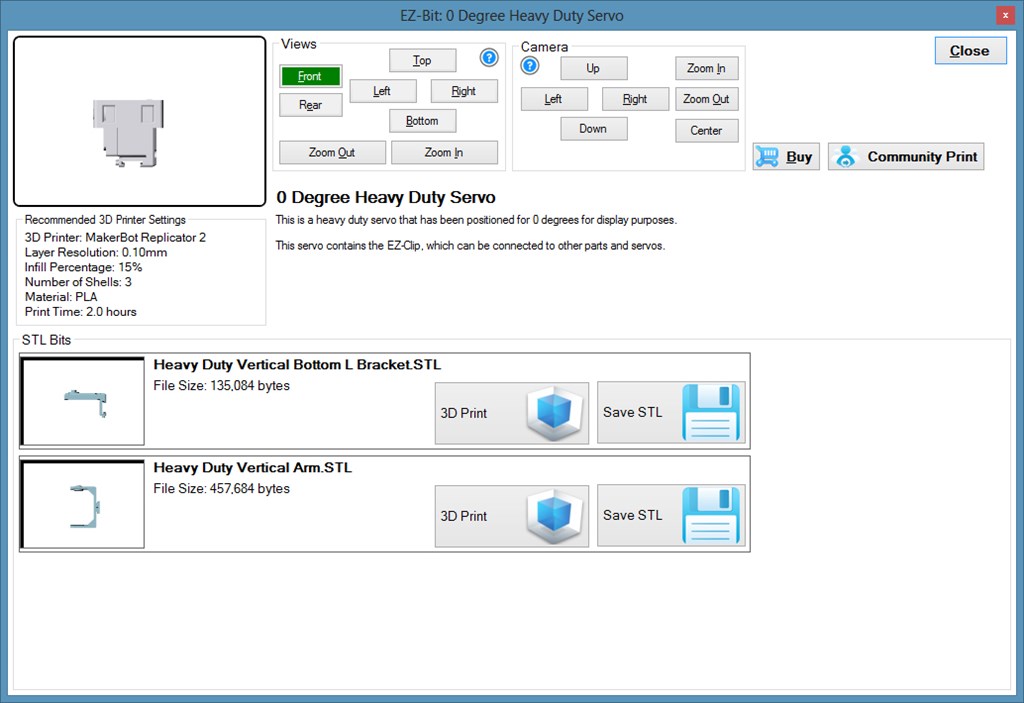 But then when I tried to open a project from the cloud it sprang this error.

It happens for some, but not all. The Ping Avoidance example opens fine but when I tried to open the Dagu Example and the BobII example on my cloud (both public) I got that error. I'll try a few others shortly and list what I find.

#6   Jun 2013
Ah, yes the EZ-Cloud needs a few changes for large files. That will come in the next update

We are redesigning the EZ-Cloud entirely right now. There may be some outages over the next few days.

#9   Jun 2013
Bravia, You're welcome! We haven't figured out Mindwave just yet... We are having some issues getting it to work. We'll have a usable control if we can figure out what to do with it

feroze
USA
#12   Jun 2013
I have the Revolution update but how do you get the robots models? Whenever I press sync in the library it just brings up an error.

1 of 12) Downloading JD Biped Body by DJ Sures (2,292,276 Bytes)
Error downloading from EZ-Cloud: The formatter threw an exception while trying to deserialize the message: There was an error while trying to deserialize paramete http://tempuri.org/:GetEZBitResponse. The InnerException message was 'There was an error deserializing the object of type EZ_Builder.com.ezrobot.www.bits.GetEZBitResponseBody. The maximum array length quota (16384) has been exceeded while reading XML data. This quota may be increased by changing the MaxArrayLength property on the XmlDictionaryReaderQuotas object used when creating the XML reader. Line 4, position 191334.'. Please see InnerException for more details.

Anyone else getting this? I can't start printing! Anyone else with this issue when syncing?

#13   Jun 2013
That's the same message (I think) as the one I mentioned earlier, which is a problem with the cloud and large files.

airwave1206
USA
#14   Jun 2013
DJ, you are the greatest. Thank you for. Everything you do and have done in the past. I have never seen the spark to build home made robots like this. You truly have changed the way people think about robots, there not just toys! DJ you Rock.

feroze
USA
#15   Jun 2013
@Rich So could you view any of the 3d robots so far? The update doesn't even matter if nobody can download a single 3D robot. I am sure this was not the intention.

#16   Jun 2013
I didn't try since I'm at work and only had a quick look when I had 10 minutes free and there's no point wasting bandwidth for a PC that's never going to use the 3D stuff. I doubt it though if you can't get the library parts though.

The update does have other stuff in it too, and is a Beta. I'm sure this wasn't the intention but the problem is not software based from the sounds of it but is to do with the Cloud, which is being sorted over the next few days/week/whenever.

You can still import your own STL files in and build your own robot design, that much I tried and my ARC Reactor imported perfectly.

It doesn't really work... And since it's not got, nor will have the correct clip I wont be able to share it... but considering it was just a quick mess around to get me back in to 3D I'm sure I will be knocking out more and more cool little EZ-Bits

hhammoud
United Arab Emr
#19   Jun 2013
@DJ : We have to stop and appreciate your full dedication and commitment to your work , your dream and especially to EZ-Robot growing community.

robotmaker
USA
#22   Jun 2013
THANKS DJ so very much you are now my hero ,i see you added mindwave,been waiting for this since i have headset.

robotmaker
USA
#23   Jun 2013
Also can you add EPOC EMOTIV its much better then MINDWAVE it uses more EEG sensors,plus only $99.95 only $20 more.
Login to post a comment