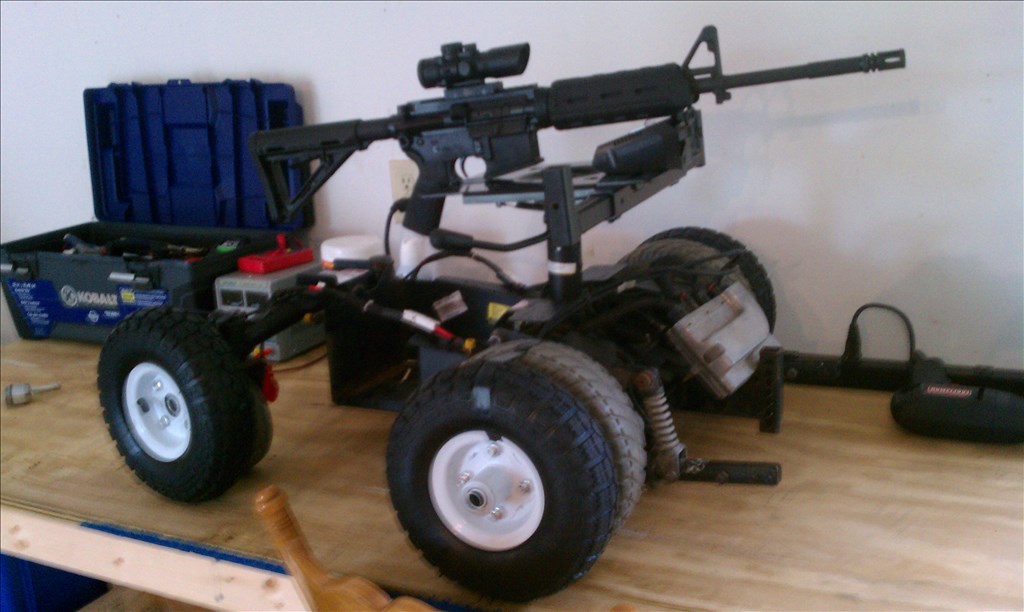 Step 1 was to get some idea of my vision. So I took what was at hand and got it rolling just to get a feel. Now I understand where it's going. Yep for military and gun enthusiasts that is a working AR-15.

I started cutting steel for the frame and turret. Waiting on my V4 to arrive. Been outlining the programming. Until I get the V4 in hand I'm not sure if I'll bring more V4s into the mix or add arduinos. For those of you that have the v4, ideas?

For all intents and purposes this thing is intended to patrol the property at programmed times and then go into hold mode for a time to listen, watch and save battery life. If while it is holding any stationary or on-board sensors pick up an anomaly then the sentry will be directed to investigate while sending me alerts and/or video feed.

My idea is for a rolling platform (this one) and sensor pods (for lack of a better word at the moment) that are stationary but all meshed via a control server to talk to each other.

What I posted is not capable for off road use so when I get the chassis built and the V4 controller I'll post the true prototype and video the field tests (successes and failures).

The goal is to have an autonomous sentry that can be taken over by manual control as needed.

GPS guidance system to contain the thing within certain boundaries and for the server to know were it is in real time.

I'm a decent programmer but I need to make sure all the bugs are out before going live with an AR. (a real gun is a joke for those of you that might be worried) Possibly a paintball marker with pepper or rubber ammo.


Yes I am serious, yes I may have PTSD (at least that is the head doctor's opinion) but I'll sleep better at night knowing the coyotes and an occasional Big Foot don't get the drop on me 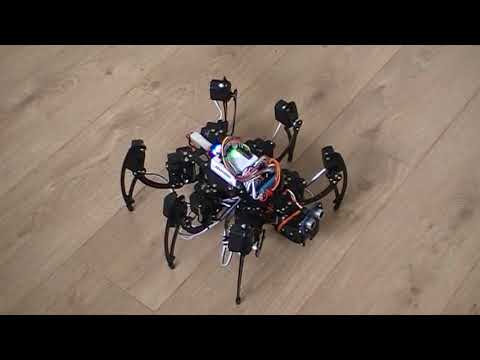 I've eventually got around in completely rebuilding my Hexapod ( Ziggy ) using the HDD Servos, after I completely... 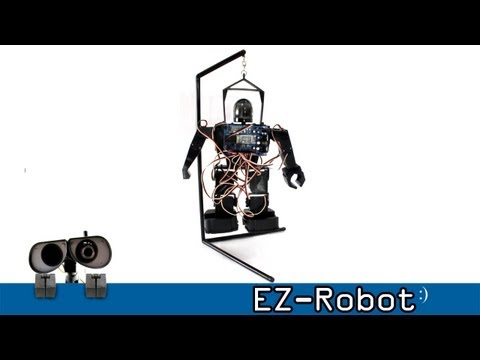 The RoboPhilo Junior is a fantastic and affordable Humanoid Platform for the EZ-Robot Complete Kit. Description: The...

I been working on this quad for awhile, back before the EZ-B kits started. I only have the stabibility to work out...

Dunning-Kruger
Canada
#1   Sep 2014
If that's a real gun.... You may not get the warm reaction you expect .... One of the rules I believe on here is not to build/propagate robot weaponry...

What if your sentry malfunctions and decides to shoot the mailman or girl scout wanting to sell you cookies?

pacowang
USA
#2   Sep 2014
Yeah, no real guns. Everybody that saw that had a similar reaction. The intent is simple, I live in a coyote infested area that is a problem for livestock and pets. So, PAINTBALL marker is going on for the ability to remove the threat and be non-lethal at the same time.

There is a lot of live gun fire around here dealing with the coyote problem. I figure this to be a more humane and safer alternative.

Yep thought about that too. My daughter had similar concerns. I figure it will get regulated to the back 40. I still want to get my Girl Scout cookies each year.

I understand a weaponry rule. Makes sense. This I define as defensive and a humane answer for the us, the livestock and the coyotes.

Let me know for sure if I violated any rules here.

Zap Brannigan
USA
#3   Sep 2014
@ Richard - I think he said the AR was a joke. ARs are too expensive to be out wandering about the yard unchaperoned.

I have also considered an airsoft rifle or paintball gun just for the fun of it.

Dunning-Kruger
Canada
#5   Sep 2014
Fair enough.... Remember with the V4 you can't go out of wifi range.... If you are going to run your bot outside you will probably need a way to boost your wifi signal...

Dunning-Kruger
Canada
#6   Sep 2014
We have lots of coyotes where I live as well... The local farmers breed and use Lamas to protect their livestock....

#7   Sep 2014
I used to own a paintball field. I am actually in a paintball movie called Solders of Paint. The concern I would have about the paintball aspect is the paintballs becoming gummy or damp and causing issues in the hopper or barrel. you will need to keep these dry and they dont last long even when cared for in an air conditioned building. Also, paintballs are not accurate unless at pretty close range.

It you are going to use CO2, it will weaken quickly on hot days. Nitros is the way to go then. Anyway, good luck.

pacowang
USA
#8   Sep 2014
For all of you that are offended by the AR, I understand. It is what I had at hand for the mockup. I fully intend to go with a paintball marker.

Richard you are right as far as the lamas go. Unfortunately we have lamas at the far end of the fields and that drives the coyotes toward us in the residential section at the edges of the fields.

Agreed Mr. Cochran. What do you think of compressed air?

If I can I would like to steer this away from the AR and towards interfacing the V4 into the sentry. My initial thoughts were arduinos. That is what got me to dust off my old V3 but I was never in love with the Bluetooth end of that. Now that the V4 with WiFi is available that is my choice.

I suppose I could attempt to forgo the paintball marker and have the same principle but with a deterrent such as lights, compressed air bursts, music I lean towards Flight of the Valkyries)?

There appears to be a lot of smart people here and I hope this thread will tap into your (their) minds for better solutions to what I am trying to accomplish.

I am open and ready to hear from anyone that cares to offer advice.

#10   Sep 2014
If the neighbors don't complain, a good sound system with directional speakers and cool sounds might help with your overall goal.

Zap Brannigan
USA
#11   Sep 2014
I certainly was not offended by the AR. I have one and like shooting it.

How about a super loud air horn?

Honestly, unless you are going to get within 150 feet or so of the animals, I would not use the paintballs. They are not accurate enough. I would think the sound of the robot would scare them more than getting hit with a paintball anyway. Paintballs flatten when they come out of the barrel. They are not like bullets and become really very non-aerodynamic at speeds that would be high enough for anything with pretty good fur to really feel much.

I played with just a shirt on and would get some whelps but it sure didn't slow me down.

#13   Sep 2014
rubber ammo would limit you to about 80 feet probably. pepper is still contained within a jel coat so it will have similar limitations to the normal paintballs.

pacowang
USA
#14   Sep 2014
I think at this point what I am going to do is finish cutting steel and get the frame welded. I am guessing from what I saw when I ordered the EZ-B4 that It is back ordered and may be a while to get it.

So, I'll keep waiting and read and research as much as possible here to get a head start on the EZ controller option.

Trying the airhorn, music and lights is cheap an fast to test. I can tell you this, the cows were mystified at first with this thing when it rolled up on them. the next time a few days later one of the calfs was trying to play with it. So I don't think the coyotes are going to be the least bit intimidated with just a rolling base. We'll see

Anyone here have any idea how long it takes to get the v4 now?

#16   Sep 2014
I ordered three cameras and one EZB(4) controller 6 weeks ago and DHL delivered the package yesterday. The controller was missing but it could of been that the packer didn't know the controller is two parts and just included the power unit. EZ Robot is sending me a replacement next week.

pacowang
USA
#17   Oct 2014
Well worth the wait I think. For now it looks like they are going through a growth cycle. If they keep this up they'll be in the big leagues soon. DJ Sures, no matter how successful EZ-Robot becomes I hope you keep the small company way of doing business.

Hope the company prospers and you are all paid well for the hard work.

lol , i have a couple gunner robots. It is a fantastic challenge but honestly it also goes to say there is a huge safety factor. Obviously hes thinking more along the lines of a airsoft or paintball replica but that still has about 80 percent of the same engineering challanges.

, but please , don't use curse language or ague with others. We gotta keep it clean for all the other mad scientists in here.

robotz12248
USA
#19   Oct 2014
WoW Josh! I'm thinking you're setting your self up for some bad JuJu. After seeing this post I thought I might mention my RoBo jeep project. I did see that it's still in the "share" section of the forum. I still have not finished it. I'm down to a steering servo/setup and misc wiring. If anyone is interested I'd be more then happy to share.
Lloyd

RoboHappy
PRO
USA
#20   Oct 2014
I'm certainly not offended by the AR idea. I think the design is sound and I too would do the same. I'm totally for automated defense system designs, its pretty cool. We need more of that. I've always been a fan of a Terminator type of robot (would be a dream to build a real one someday).
Login to post a comment