For those that helped with battery issue, I picked up a replacement locally and we are trying to fine tune jd's servos. I have gone through all the steps but when it comes to creating a profile we are getting stuck. See images as to what happens. I think we accidentally created a profile but not sure how to proceed from here. I am afraid we are robotically challenged. 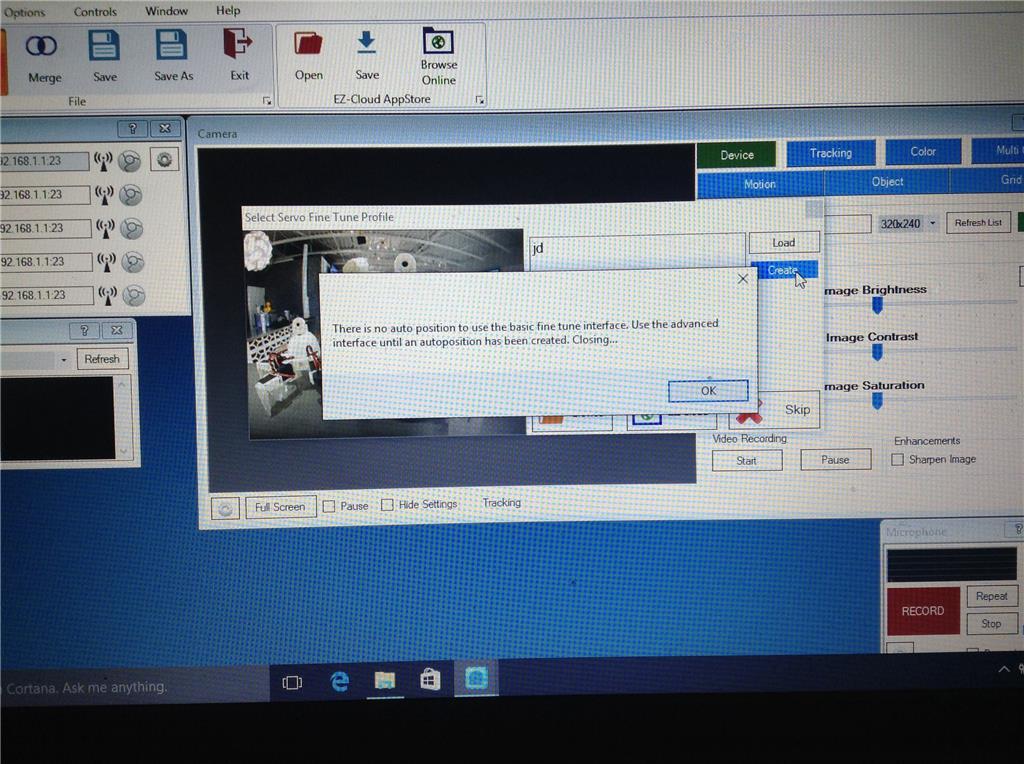 Dunning-Kruger
Canada
#1   Dec 2015
Are you using the sample JD project in ARC? It's better to use it as your template and go from there... Creating a new JD project from scratch will be daunting for the newbee.... The error you're getting means you have no autopositioner control in your project... Without the auto positioner you can't fine tune servos... Without a fridge it's hard to make ice if you know what I mean....

#2   Dec 2015
To expand on what Richard said - it would be great to start with the tutorials in the learn section. We have put so much work into the section, that there are even videos which demonstrate how to assemble the robot, create a profile and more. It's really easy to use. First, there's a video on the home page of the learn section that tells you what to expect. Second, the courses are organized step by step. You can even keep track of progress.

Please start with the tutorials into the learn section. It's really important to avoid issues like what happened with the battery to follow the tutorials. Because there are little things you will need to know, and a step by step tutorial is the best place we could put them.

Hope that helps! You can access the tutorials for jd by pressing the learn menu option at the top of this website. Also, it's presented to you in the software when it loads, and in the packaging.

Good luck! It'll be easy and smooth sailing once you get started with the tutorials.

WesleyHarris
USA
#3   Dec 2015
Thanks JD. I have been over the tutorials numerous times and I believe I have followed them correctly. This is Wes's mom and apart from the battery it has mostly me doing this. Not sure what change this last time through, but I am happy to say that we found the right way to fine tune and we are currently up and running with a properly functioning robot. Thanks for,the input.

#4   Dec 2015
@WesleyHarris
Yes, I ran into that catch-22 some time back when I was first starting with EZ-Robots. It seems you have to create something, somewhere before you will get the servo profile to show up. There may be other ways, but I have found three ways to go.

First, as Richard pointed out, the easiest is to start with an example project. It will, as he also mentioned, have covered the bases and a servo profile will show up automatically when you need it. But if you want to start from scratch, you will have to create your own from scratch as well.

So, a second way to get what you need is to first place an AutoPosition control on your project. Then, click the gear icon on the upper left and either choose the already existing frame "STAND" . The window should remain blank when you do.

Now, at this point, since you are starting from scratch, you will not have any sort of illustration of your robot showing up in the Frame window you are working with. It will be blank. If you want an illustration there for your reference, you will have to back out of the AutoPosition control and go to the "Design" function and make an illustration from the EZ-Bits in the Library. I'll come back to that in a bit. For now let's just go back to the AutoPosition control and choose a frame.

You can still place servos on the frame, regardless of whether there is a reference figure there or not. Simply click "Add Servo" and move the servo control that appears in the upper left to about where it would be if you did have a reference figure on the window. To move a servo control, you have to move the cursor around it until the border turns green then click and hold and position it. Put it about where it would be if there was a figure in the window. Do that over and over until you have all the servos the robot actually has in place on the window.

In reality, the position of the servo controls does not make any difference. You could put them in any arrangement you like, whether it looks like the robot or not. Placing them in the general position of where they are on the robot, however, makes it easier to associate a given servo control with it's corresponding servo.

Once that is done, be sure to click save on the lower left (otherwise you loose it all). Now, when you go to the servo Profile window (click "Project" then "Configure" ), there will be control boxes in the same places in it as well. Also, what you put in the one frame in the AutoPosition control, will show up an all the frames from then on. Change it for one, and they all are changed accordingly as well.

That's a long, involved process, but when you start from scratch, that's how it goes.

Also, that's what you have to do when you are using a non-EZ-Robot. It's what I had to do recently when setting up for the Meccanoid robot I have been working on to use EZ-Robot parts. Unless you have the STL files associated with the robot itself (and you likely won't) you can't use the Designer function to create a reference figure.

While I'm at it, I might as well mention the method I used to get a reference figure of the Meccanoid in place so it would show up in the AutoPosition control and the servo Profile window. There may be other ways but this is what I did.

I took my own picture of the robot because I made modifications and it was the only way I could get a picture of the basic robot in the pose I needed. I then went to the Design (Project/Design) function and to the last tab in the row of tabs on the upper right (Settings). Once there I clicked the "Change Designer Background Image" button on the lower right and chose the picture I took. It then showed up as the background, but that's good enough. You don't really need a foreground image. Long as you have a picture of the robot there in some way it's fine. Then, I also clicked "Take Snapshot" on the upper right so as to make it the thumbnail pic for the project.

Be sure to save all that (Save button, lower left). You will then see that image in the AutoPosition frames and the servo Profile window.

FYI, the picture should have a good deal of filler on either side. In other words, a picture of the robot centered with significant blank areas on either side. Otherwise the image will show up wide because it is stretched to fit the picture area. OTOH, there should be little extra on the top and bottom. I think a square picture size is good. The picture of the robot should be centered left to right, taking up about 1/3 of the overall width of the picture, but near the top and bottom.

You can also use that method to do an EZ-Robot as well if you don't want to go through the process of creating one using the Design function. Good for modified units.

EDIT Well, heck. Just saw your post saying you had worked it out. That's what happens when you take so long to write up a reply. Glad you have it going in any event!
Login to post a comment