First plugin. Check the plug in's section. Let me know if you can use it. 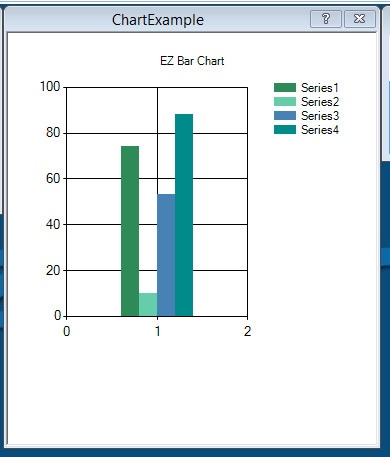 Herr Ball
USA
#1   Oct 2015
Could you explain a little more of just what this does, please.

#3   Oct 2015
I'm not sure the plugin is right. It shows Cats and Dogs and does not change value of when the example script changes the variables.

#5   Oct 2015
If you'd like, I can take a look at the code and make some recommendations? After testing today, I noticed there are no ControlCommands published for the cheat sheet. It would be easier to use if it showed on the Cheat Sheet the available commands.

Also I received an error about a series1 not existing - and it was in the form of a messagebox - even though the series1 is already in the example posted.

Do you want me to take a look, modify and report the source here for you with my recommendations?

#6   Oct 2015
Here you go - I tweaked your project and made some changes, including new functionality to Add/Remove/Rename series.

Changes:
[feature]
changed the chart object to dock with the form so it can be resized

changed the form to be resiable so users can resize it

removed decleration of MyForm since it is the form

renamed the barchart on the form to BarChart

added conditions in the SendCommand for each series (windowsCommand) with messagebox displayed if windowcommand is incorrect. normally this would use the .EQUALS with a stringcomparison type of case insensitive comparison - but since the chart series is case sensitive, i added a message if the series wasn't found to check the case sensitivity

changed the output build folder to be c:\users.. instead of c:\public.. because my machine puts the public folder in the c:\users

added the ability to rename the title of the chart

#7   Oct 2015
@DJ Wow! I wish you worked at my day job... well kinda not then there wouldn't be a EZ Robot. I've been doing almost exclusively web programming for the last 6 years I seriously need a refresher on winforms dev.

@JustinRatliff I think in my mad rush, with a head cold, to get the plug in published I somehow uploaded an early version .dll and not the current one. The zip plug in upload requirement combined with windows send to compressed folder was causing me grief. Also, initially I thought the whole solution had to be uploaded for the plugin project section. I thought for some reason EZrobot was housing the project as a repository of code as well. I now believe it is just the .dll and xml for the plug in.

I'm guessing Github is the intended location for the plug in source code/project.

#8   Oct 2015
Ah, that make sense why the variables and find control was used. I took those notes while changing in case there was interest in what changes I was making. Didn't want to change your program without telling you, that wouldn't benefit either of us :).

If you have any questions about the things I changed, ask away!

#9   Oct 2015
Also i should add - if you edit your Plugin.xml in the source i gave you, i would recommend changing the category to "Graphs" instead of Misc.

Additionally, add a Title.png or Title.jpg to the project and include it in the plugin Archive so the control has an icon rather than using the default plugin icon.

#12   Oct 2015
I believe I have a correct plug files uploaded. Tried installing from scratch and all was good. Welcome to version 1. Let me know if you have any issues.


Thanks DJ for pressing the turbo button.

awesome! I was working on ARC last night with the auto-update for plugin feature. Fell asleep on my keyboard watching Moonbeam City. Most likely finish it tonight.

I recommend moonbeam city btw. Discovered it last night and it's great!

#15   Oct 2015
I'm really excited about being able to contribute to such a great community.

I just uploaded a more polished version and you can now change the colors of the bars in the series.

Wonder where wbs has been? He's also a great community candidate for creating plugins.

Did you see the sort array plugin that u made for Bob? I published the source code. You might be interested to see how I accessed variables from the ezscript engine.

Currently they are specified in a string...

It would increase versatility if each color was specified separately like so...

Because then you could do this...

#18   Oct 2015
Great, idea. For some strange reason I think I took the more obtuse way doing that by using a string. Will do for next release.

#19   Oct 2015
awesome - looking forward to it! I've been using the graph control for visualization.

Any idea if you will be making a historical line graph in the future?

Dunning-Kruger
Canada
#20   Oct 2015
Nice work @leversofpower.... I can use this as a graphical monitor for my ezb and roomba battery voltages.... It would also be awesome to use if you had 3 or 4 pings across the front or around your robot in order to monitor various distances....
Login to post a comment