Tuttorial About Talk Servo For Leds

is there a window for talk servo with led?insteadt of inmoove mouth opens,
while talking,but with a led then.

Based on your post activity, we found some content that may be interesting to you. Explore these other tutorials and community conversations.
Show all 119 comments
Load More ...

do you use desame sound servo pc for moving the mouth? 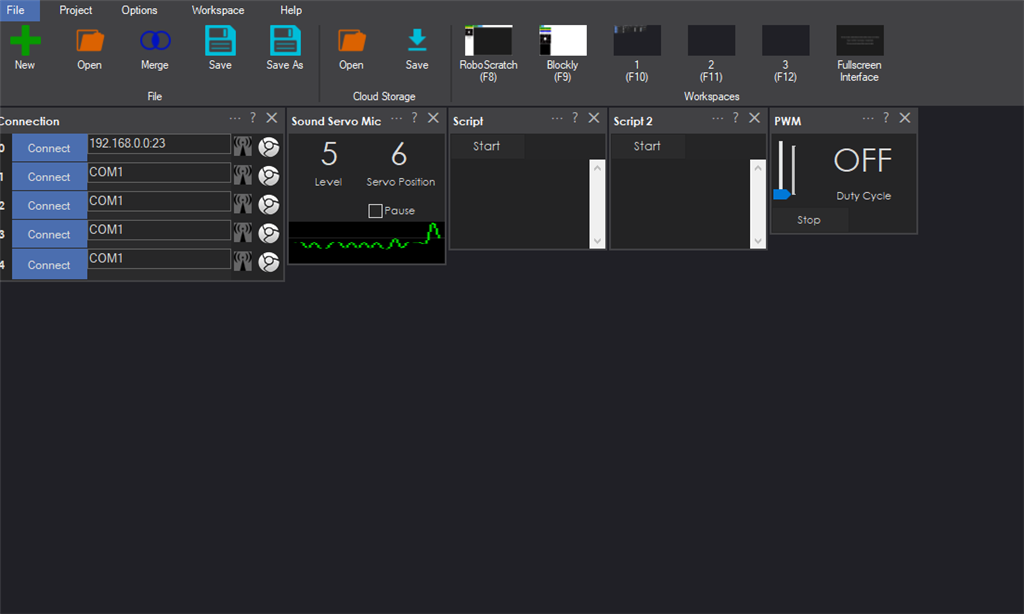 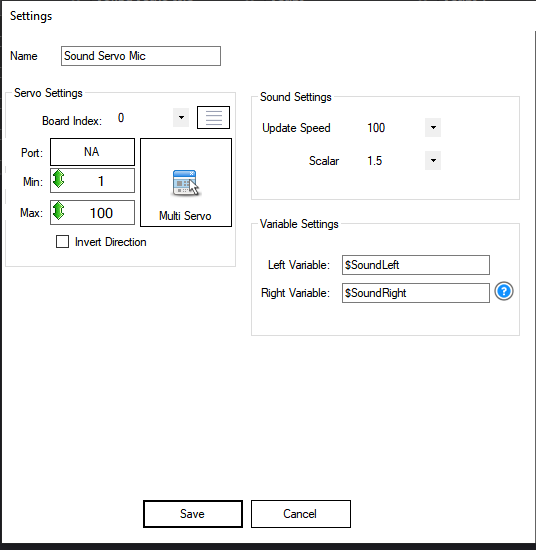 The blocky code to tell the LED what to do.... (Port D14 is where the LED has been successfully connected, so the code is modified to incorporate port D14.) 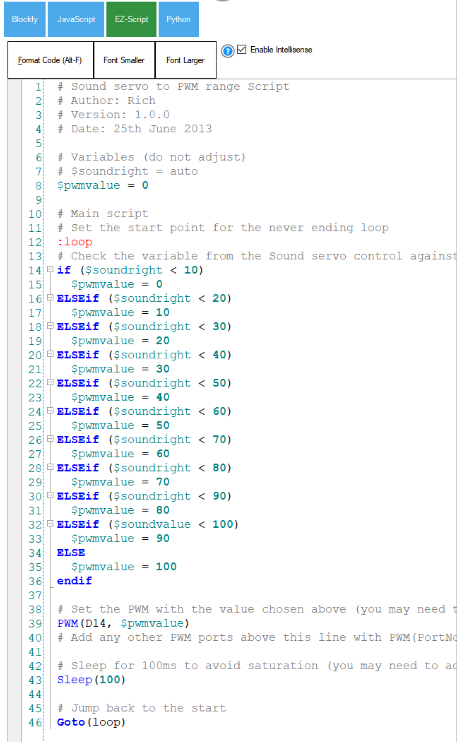 The script of a bit of test dialogue...

The settings for my PWM control. 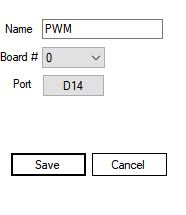 I raise the slider on the PWM (which immediately snaps back into the OFF position), I hit the START button on the script controls, and THIS is the result.


It's talking, but we don't SEE it talking. And even if we COULD see it talking, it would look like THIS.


I want the talking LED to be as bright as the eye LEDs, and I want it to flash with each spoken syllable, but neither action is taking place. When it DOES work, it's stuck at a barely visible random flicker, and it continues even after the speech has stopped.

"i see only one pwm in his project."
No mention of needing more than one PWM was made before now.

"Or a simple script to turn on and off:"
I just tried that new script you provided. 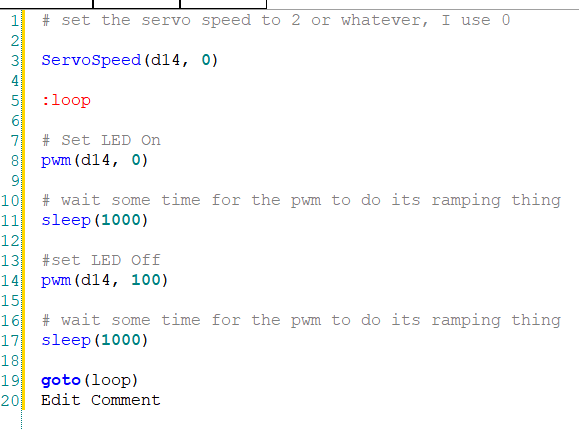 This isn't giving me the effect I want.

"I see you have sound servo mic. you need sound servo (PC)"
This is EXACTLY what I've been talking about this entire time; these are the most confusing, unclear instructions I've ever read in my life. Nomad said that I needed "servo mic".  I pointed out how there ISN'T any control listed as "servo mic", that there are instead FIVE different sound servo Controls, and even after listing each one by name, all he said was "Sound Servo".  I switched over to Sound servo (PC) after you made that suggestion, and THAT didn't work either. (Post #73)

But okay.... Just for the sake of argument.... Just to show you that I'm honest-to-everything-holy TRYING here...  I'm going to re-insert the original code combined with the Sound servo (PC) control.... 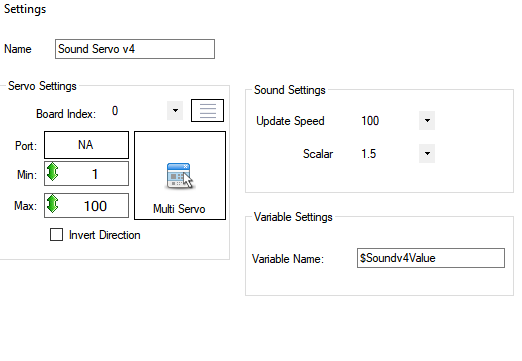 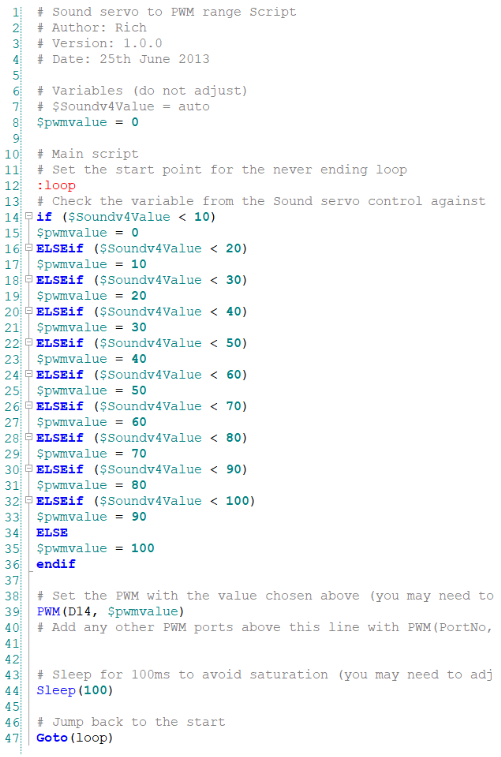 
*sigh* No... It's still too dim, it's not blinking in sync with the dialogue, and it prematurely stops blinking before the dialogue is completed.  Then again... it actually TURNS OFF when it's done talking.

the sync off the LED  wil not work 100% correct.you will need to try diff kinds off LED.
you wil need clear LED with higher MCD .some between 500 and 1000 mcd
also you can tinker a little with these settings . 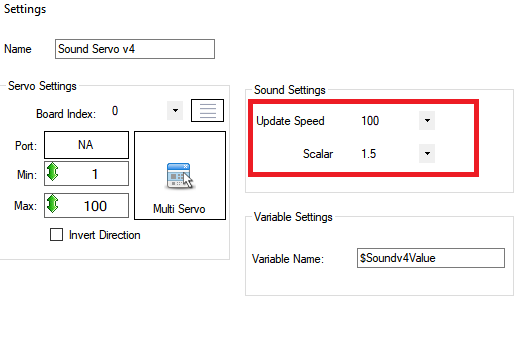 there is another way to get beter sync for the LED ,that is solder the wire on the pads from the speaker.
any sound that comes out the speaker,the LED will flach same ritme.here a video.

this way you cant cotrole the LED itself.

There are a couple methods in hardware that you can do. As Nomad mentioned you could use a Super Bright LED that has a high millicandela (mcd) value.

Another way to make it bright is to use a transistor and adjust the resistor so that more current gets to the LED. An LED hooked up to an EZ-B I/O port is limited to 10mA by the on-board resistor but you can still use an I/O port to control a transistor to get access to more current.

Rich wrote a great tutorial here about using a transistor to control a bulb. A TIP120 is a bit overkill for your application but you can use the same concept with a common 2N3904.

One thing to note is that with PWM you'll always want to stay near the higher percentages for your on time as that will keep the LED bright.

Come to think of it, I like Nomad's idea of using the speaker voltages to activate the LED, it would need to be attached to the amplified side of the amplifier (extra speaker pins), combine that with a transistor circuit and I think that could work well.

I see you have sound servo mic - wrong

Bobsheaux
USA
#108   Aug 2020
@Nomad
So in THIS tutorial...
https://synthiam.com/Community/Questions/Breaking-Out-The-Sound-From-The-V4-Ezb-8463
...Jeremie says that positive or negative doesn't matter when hooking up an external speaker to the EZB (post #32).  How exactly is the LED in your last video hooked up to your speaker?

iff you take for excample a white wire and solder on the SPKR .

then connect the ezbv4 to your arc.

then touch with the wire the pins off the speaker.only one way will work.

as jeremie stated color positif or min does matter. 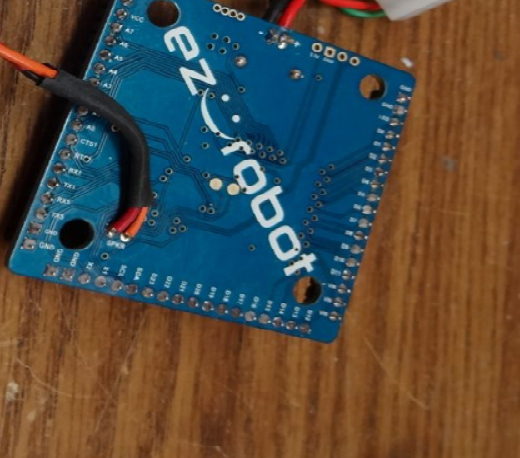 its the other side of the wire thats going on the speaker that you need to test,

Bobsheaux
USA
#110   Aug 2020
Okay, but how did you attach your LED to your speaker? You said you soldered it to the pads of the speaker? The soldering I understand, but what/where are the pads of the speaker? Apparently it doesn't matter in which direction you solder the wires of a speaker to the EZB, but I wouldn't think that's the case with LEDs, right? The proper position of positive vs. that of negative DOES matter, doesn't it? 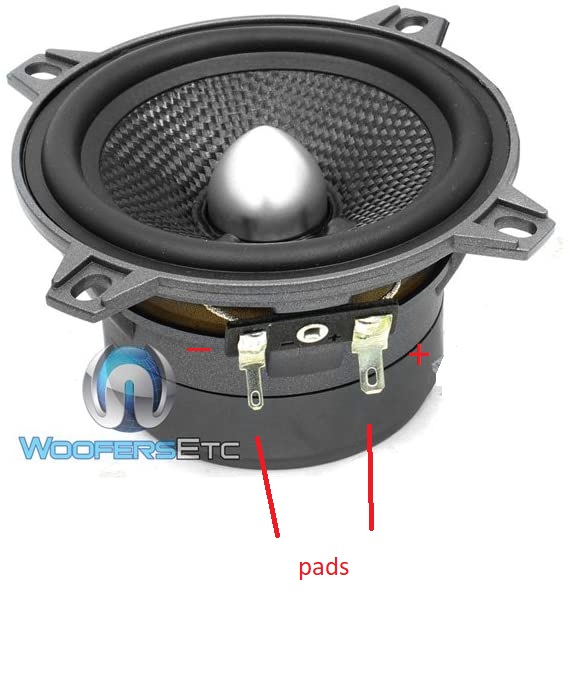 but on the speaker or LED you have to test wish wire goes where.

you can use colored wire if that easier to remember witsh color goes where.

2 strip the wire on the other side .

3 connect your ezbv to arc

5 tough with the wire the pads from the speaker ,if you dont hear sound switsh sides .mark one wire so you know  wish pad it goes.

6 sound file is still playing ,now connect the LED and see if it lids up ,if not swish sides and mark one off the wire.

8 solder the wires on the pads or you can use one off these see pic. 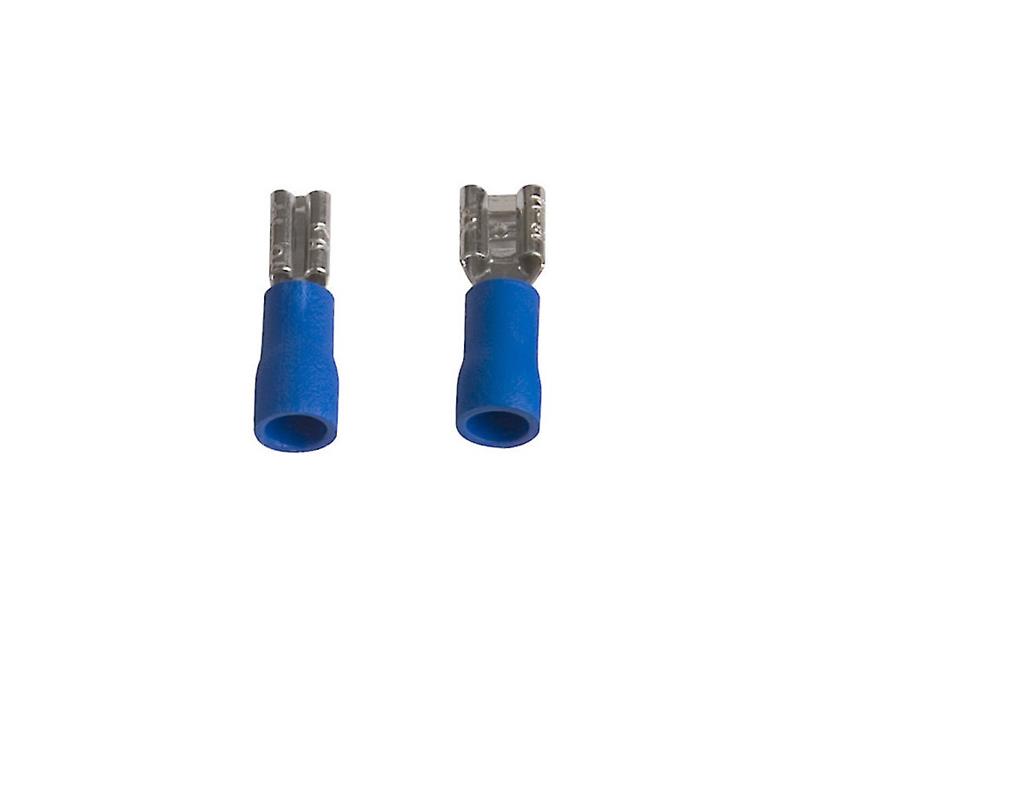 Bobsheaux
USA
#112   Aug 2020
But where am I connecting the LED? The speaker has positive and negative terminals, you hook those up to the EZB, but where on the pads do you put the LED? I need to reiterate the point that I'm not trying to be confused or argumentative here, but it sounds like you're telling me to just put the LED anywhere and that will work.

after you tested witsh wire goes where. 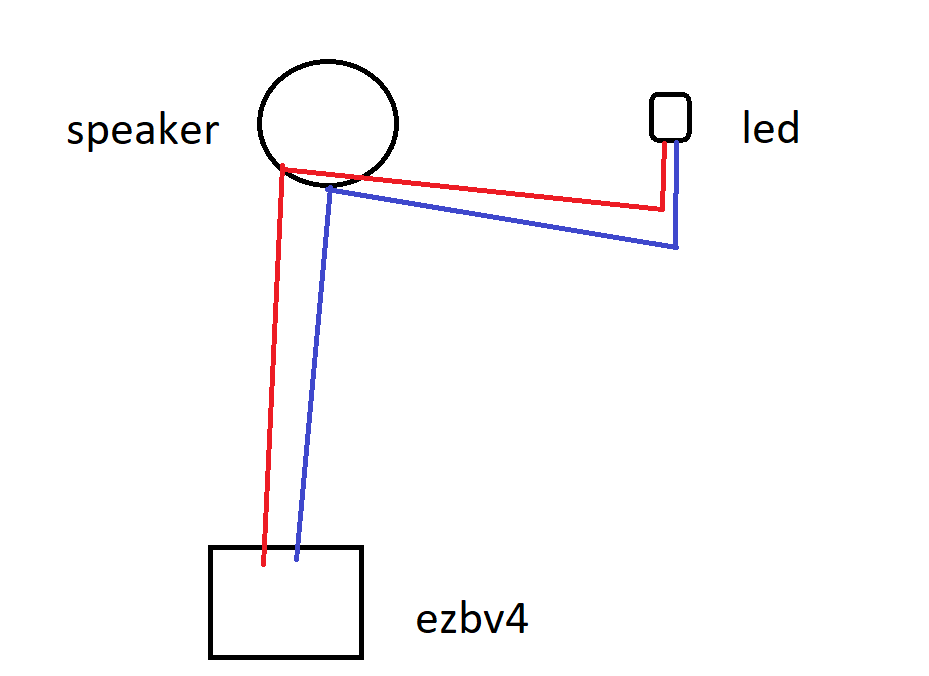 I always finish and understand a project before I go on to something else.
EzAng

Hi Nomad, how are you?

Used Rich's script also from the past.

wow, everything is from the past, lol 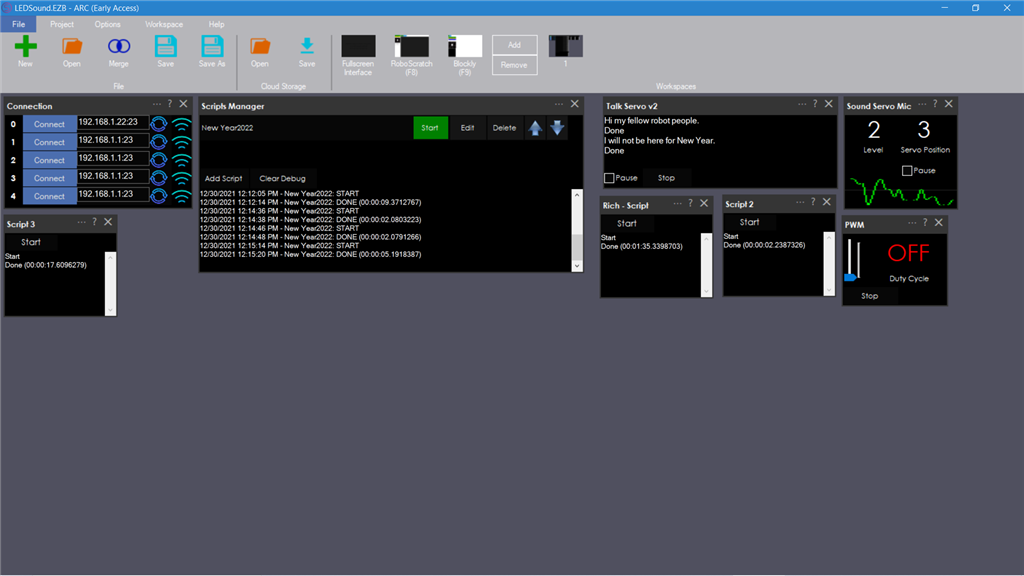