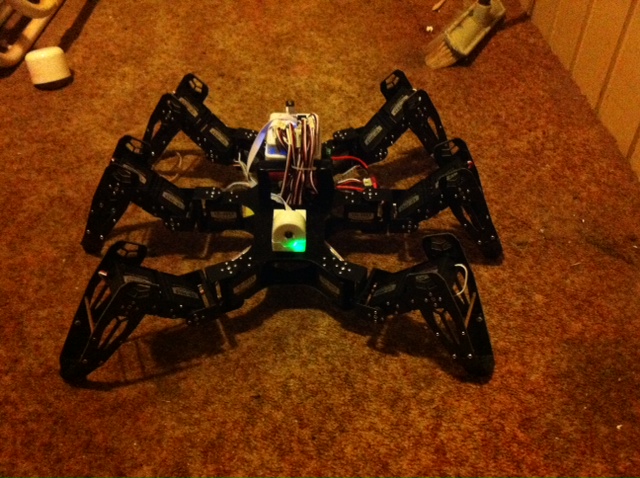 G'day, This here is Tweaky, my little hex project. It consists of the EZ-B and some cheap POS frame. While i do have a good background in RC. I'm a noob on the programming front. So far servos are set up. Tweaky can stand and walk forward and back in a rudimentary fashion on my code.

I would be very grateful if someone could give some tips or references to the best way to generate the gait.

(and yes Tweaky is named after the one from Buck Rogers)

Hexapod gait will be super easy and fun. When I made the gait for six, it took less than an hour. Although I kept tweaking it over time.

The control in ARC to use is called "auto position". The manual page can be accessed by pressing the question mark once the control is added to your project. The Auto Position control can be found in the servo tab. Add "auto position movement panel", because it will be your master Movement Panel for the project.

Now, you could start a gait on your own. Although, it might make the most sense to build off Six's gait. There is a tab in be options window of the Auto Position for import/export. Using the import button, you can load the six project into your Auto Position and select frames and actions to load.

Alternatively, you can simply load the Six project in ARC and build off it directly - which is probably the easiest because it already has a mobile app and features.

The key here will be to ensure your servos are connected in the same ports as six's servos. This can be identified during the assembly process.

There's a chance that your servos may be installed upside down in relative to six. In which case you can simply modify each frame in the autoposition

Lastly, your Hexapod does have more servos than six, so the Auto Position will need modification to accommodate them anyway.

Visually modifying the gait is real easy by simply moving through frames using the arrow keys when editing the auto position.

Can't wait to see this guy up and running!

LT Bentley
Australia
#2   Apr 2016
Thanks DJ, I was originally trying to change the six's code to suit my needs. But like you say with the extra servos and their orientation. It made for some funny spaz moves while testing.

As it is Tweaky is propped off the ground with a "dance mat" under him with markings for where the steps are. Now armed with your advice I'll get cracking on the code.

I realize the path of least resistance is to modify the Six's code. But to get a better understanding of programming I'll start from the ground up. (the mobile features are lost on me until I get a new phone anyway) But I'll certainly be using the six's code for reference.

Again many thank for the help, Tweaky and I will endeavor to make you proud.