When:
Duration:
40 people have subscribed to this event
Watch Archived Video

In this archived video, he gives a tour of the facility and discovers Build-a-bear costumes fit the EZ-Robot JD Humanoid perfectly! The hack he performs is on a Playskool Digger toy that he stumbled across at the Thrift store earlier that day. There's a nostalgia with the toy because it was also the toy he hacked for Make Magazine Volume 27, where the robot was lost in shipping for the photoshoot - never to be seen again. That was the only robot that DJ had built which was lost, so tonight he was able to rebuild the same robot by pure chance that a similar toy was spotted at the thrift store.

robo rad
Canada
#21   Jan 2019 — Edited Jan 2019
loved watching the ending with doggy chasing the red ball. easy to do with EZ cam as I did the same thing last week with my Rad bot chasing a red balloon around the floor. it is actually more fun than it sounds,LOL!

#22   Jan 2019
Thanks - that was fun! We do that every friday anyway, so recording made sense. Also, sometimes it's hacking with software or writing new programs. Other times it is hacking a robot toy

@nink, lave the bleeding edge robot hacking to you :). I was definitely in a nostalgic mode when we came across Digger the Playskool robot today at the thrift store. If you heard me tell the story earlier - it was a big deal to me.

I think next time we'll do some software hacking

robo rad
Canada
#23   Jan 2019 — Edited Jan 2019
I did not realize Jeremy had his own stream going too or I would have had 2 windows going! Also I caught the stream Later and noticed that you guys had something that resemble a Rad robot sitting on the right of DJ's table ,but I have never seen that version on Ebay before,was that a hacked custom one or just a later model it had a name on it Bobby or something? Ya so I just watched the start of the Live video again and that Batman hack is awesome just need the mask!

mtwannabe
USA
#25   Jan 2019
Got to watch this today.  It was great. You'll have to keep a repository of these on the site to refer back to for those that can't make it.
Very fun.  Thanks a bunch

#26   Jan 2019
It was fun watching you guys work and build this fun little dog. Very fascinating to watch the process in less then 4 hours. My robot build took 5 years and is still underway and growing. Thanks for hosting this. I wish I could have had the time to watch the would thing till completion. So glad you posted the whole party to watch later. Nice work.

kazpet
PRO
Australia
#29   Jan 2019
Really enjoyed watching the video after the event. Where is the best place to buy the servo accessories that you had in your box that allo you to attach a variety of wheels?

#31   Jan 2019
@Kazpet - most servos will come with a variety of attachments. Usually 3 or 4 different kinds. That is what i collect in the box. Every time i order a servo, i get more attachments and they end up in the box. I've never come across anyone selling them, but it might be possible to find if you google a bit. 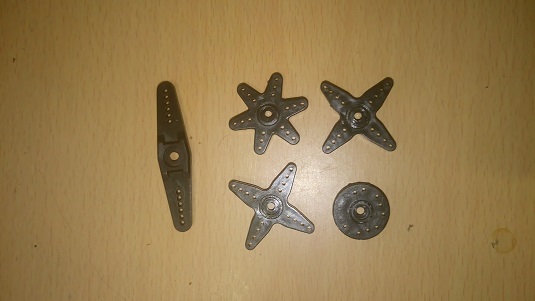 kazpet are you looking for these?i have a bunch i dont use.you can have.

#34   Jan 2019
oops big issue,but maybe i can send them by letter.if you have an adres and phone number for me.i will check post office here.
you  can find my mail adres on my icon.

Jerseylance
USA
#35   Jan 2019
Hey Mr. Sures, I love your videos and what you are doing for educational purposes as well. I see that you have a bioloid premium robot in the back are you using the EZB4 on it? Keep up the Great work sir.

@Jerseylance Yep, there's an EZ-B wiring harness hacked into the back of the Bioloid so it's EZ-Bv4 ready

Jerseylance
USA
#37   Jan 2019
Good morning buddy, are you going to demonstrate on that bot how you did the communication work?

Jerseylance
USA
#39   Jan 2019
The bioloid premium robot with the ezb4. You guys do great work, I just got so much things on my hand, but when I see your videos I really get inspired. You guys are the Robot Gods bro.

#40   Jan 2019 — Edited Jan 2019
Thanks! This next live event we are discussing Dynamixel servos: https://synthiam.com/HackEvent/Second-Live-Hack-Session-17451
Login to post a comment