Some new features and fixes in this release - still concentrating on the video processor. I know there have been fantastic results from the last update, and this update increases performance also.

The new video processor uses dynamic frame rate. The frame rate is adjusted based on the speed of your computer. The funny thing is, people may ask why the max is 10 fps? Well the answer is simple: Your robot will act like it's having a siezure if the frame rate is any higher. Because the video is analyzed in real-time by the processor, the hardware also reacts to real-time results... And if the object is being tracked with a high fps, the robot goes a little insane. So, the only real reason for having a high FPS is human esthetics. The work-around to make humans happy is to use the Real-time Video View mode when viewing your robot via remote presence, etc.

The biggest change in this release is how the video data is passed between tracking modules. It now uses a newer and faster method in shared memory - so it's much happier. This leaves more processor speed available for other controls.

gpayant
France
#3   Sep 2012
Hi,
When I use MP3 to trigger it disconnects bluetooth EZ-B.
Tested with the builder version 20 and 22.
Before it worked.
Have you the same problem?
Thank

edison2
Ecuador
#4   Sep 2012
Hi Dj! I think that some people from my country Ecuador are going to buy your kit.. why? yesterday I presented my new wall-e and everybody ask me how can I do that.. and I answered answered Ez Robot... ! Campus Party Quito 2012

Meshal
Saudi Arabia
#5   Sep 2012
The dynamic frame rate is really a big advantage for this release. Thanks DJ.

I experienced some dropped frames in both mods, my PC is really fast and equipped with dual GTX 580 video cards in SLI (3% of CPU usage). any idea ?

Gunner
Canada
#6   Sep 2012
Thanks DJ. Working better and better... Using the Wireless Camera, in a poorly lit environment, it can still pick out my face from a small photo at about 4ft away. And no problem with a very generic face

from a cellphone screen 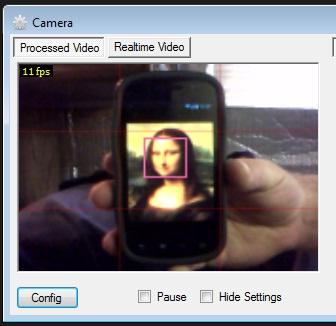 Thanks for the details on what you did and why... makes it more interesting and informative to follow your methods and reasoning. We all glean from your knowledge