ARC includes many innovative features to empower you to lead the next generation of robotics. Such as an incredibly fast JavaScript ECMA 5.1 compiler for scripting, new threading engine, and many behind the scene performance enhancements. The new ARC is not only significantly faster, it offers the the dynamic power of JavaScript for robot programming.

Why ARC?
Synthiam has been active as a leader in robotics for a number of years. Trail blazing many approaches that are now common place to robots. We've been successful at making advanced technologies available to creative users, who want to build robots without messing about with complicated code.

"A story ARC (also narrative arc) is an extended or continuing story line in episodic storytelling media such as television, comic books, comic strips, board games, video games, and films with each episode following a dramatic arc. On a television program, for example, the story would unfold over many episodes."

We see our robot software being part of the story ARC of robotics. By connecting your ideas to reality as we progress toward a future where robots co-exist alongside humans. It's our passion to connect the dots, fill in the gaps, and find the missing links of the industry.

For this, we're all part of an ARC in the story of robotics.

Significant Changes
With this release, you will notice a much faster response in the UI and increased scripting execution time. The new JavaScript engine allows user definable functions, access to .Net objects through reflection, and functions defined by plugins. With .Net reflection, your programs have access to the entire operating system, .Net controls and ARC framework. That means presenting user dialog boxes, creating custom UI interfaces, and a lot more.

We'll begin updating the website documentation to provide examples of how to use these new features during the upcoming weeks. 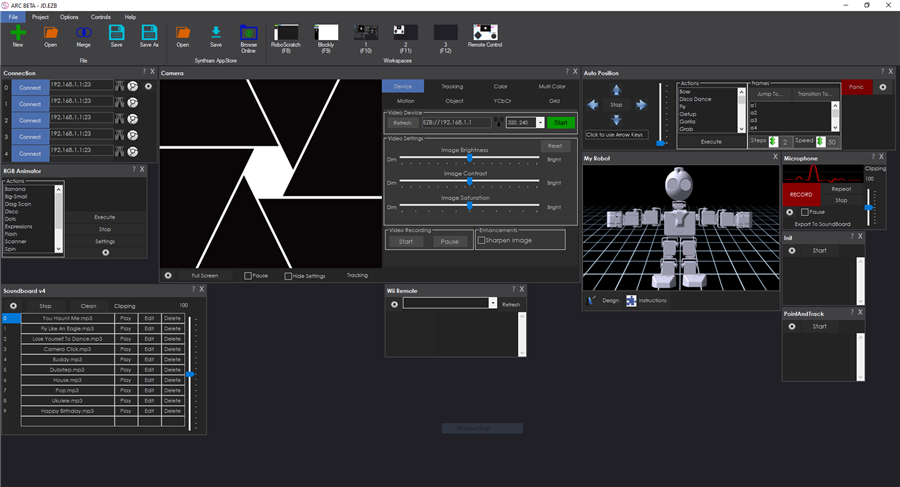 kazobond
Canada
#1   Apr 2020
I think this is a good place to ask my rookie questions. I also just switched to ARC today. So far so good. My project is all written in EZB scripting. If I understand correctly, my EZ scripts will not run faster in ARC. I have to convert them all to Javascript ? Can EZ scripts coexist with Javascripts ?

EZ-Script will run slightly faster in ARC than they did in ARC. However, they won't run nearly as fast as JavaScript. You don't have to change over - but for the added reliability and improved performance, it's not a bad idea. Also, JavaScript is a lot of fun!

I have a large project that is spread across all three virtual desktops. Screen one looks fine. I have no scroll bars on screen two and three even though my controls extend way down below the bottom of the screen of both desktops. There is no way to scroll down to the controls down under.

I can't find a way to see what version of ARC I have. I do see the version if I load a blank project but if I load my project from a shortcut on my windows desktop there is no way of knowing. I thought it would be visible under the "About" tab but no.

When I do a "Check For New Version" under the Help tab all I see is a quick flash of a window opening and closing and then nothing. I would think there would be a message telling me I had the latest version or tell me I do not and give me instructions on how to get the latest version.

If I have my windows founts set to 125% I get a message at ARC startup that I should run within a recommended resolution and then miss states what resolution I am actually running at. For example I'll have my res set at 1366 X 768 and it ill tell me I'll be running at 1093x614 (96x96 dip). When I change Windows founts back to 100% the error goes away. Your tutorial says fount sizes of 100-125% is recommended. It seems that setting the fount size above 100% messes something up in ARC reporting the actual resolution the computer is running at.

Other then this it's a wonderful experience and works nice.

#4   Apr 2020 — Edited Apr 2020
1) In software programs, the ABOUT window displays the version information - this also includes how to get the version of your windows program. So, click ABOUT in the ARC top menu and you will see the version

2) The scrolling has always been a strange issue with windows and the way ARC works. By clicking and moving a control, the scroll bars appear. It's not desired but it's the only way we can seem to get ARC to do that. Also, pressing Smart Arrange seems to fix it as well.

kazobond
Canada
#5   Apr 2020
@DJ Sures
Thanks for your response. It does confirm my understanding.
I'm actively converting now, and yes, Javascript is a lot of fun. Somehow, it is kind of familiar as I did some
C# programming years ago.

I do stumble on some obstacles here and there, but with reference to the www.w3schools.com/ as suggested, I'm able to resolve them (except my current array definition issue). Is there Javascript script examples that we can look at ?

I also see the person number in the About section. I guess I'm just blind. LOL.

How to define the arrays ?

#11   Apr 2020
Oh - I see... You want to push an array from JavaScript to the global variable. You're right, it seems to be not working. I just fixed it now and will publish it in tomorrow's beta channel for ya

and then do stuff to that array

It took me a while to figure out a syntax error, but I'm not about to gorget it now (hope not).
When retrieving elements from the array in the loop, I was coding getVar("$Pixel[_count]"); instead of getVar("$Pixel[" + _count + "]");