is this possible to run off windows 7 ce?

Based on your post activity, we found some content that may be interesting to you. Explore these other tutorials and community conversations.
Show all 28 comments
Load More ...

Perses
USA
#9   Oct 2014
I'd like to develop an autonomous robot. For this I would need a portable brain since ezb can't function by itself.

After scouring the web I noticed the optimal standalone computer wouldbe a beaglebone black. its creditcard sized, all it needs is power. It can run distros of linux, or Windows ce. (Surface is too expensive compared to beaglebone's $40 price tag, Not to mention heavy and difficult to recharge from a robot - Though I can figure out a way to rewire the charging port later - its still too much effort).

The storage is limited to the 2gb onboard+ expandable sd slot. To fix this, it would also link up to the master brain server for its mass storage, and updated instructions, when available.

When not available it should run by itself from predetermined instructions (Perimiter review/ cleaning/ etc) . I also have a portable mifi device operating at 4g speed (freedompop $15/device no monthly fee free Internet for life)


Think of it like the movie A.I. with Will Smith, or the game Mass Effect (Geth) 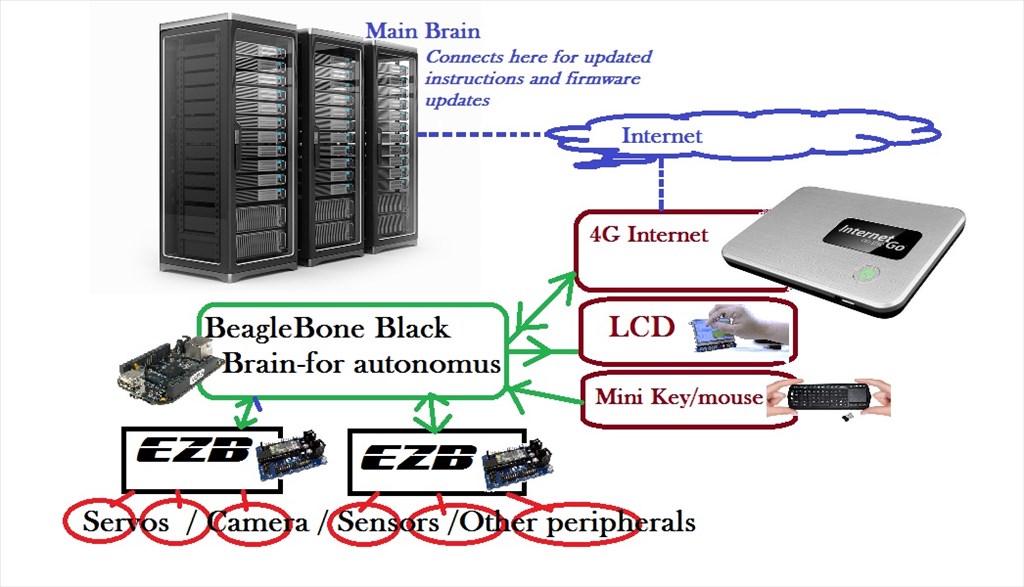 Android devices can with some limited function. Windows tablets can without limits. The Acer W3 is a popular choice.

Perses
USA
#13   Oct 2014
The advantages of a beaglebone for this project are the following :

It capable of running a full Linux os and can host servers, to which you can connect to from anywhere in the world (no more Bluetooth /wifi range limitations) .

It has sd storage

It can connect to a monitor directly through hdmi and mouse/keyboard through usb, or you can remote in like any other unix box

so programming on it will be direct and optimal.

Im getting started with compiling the code for openbot first, but looking into the python version also. i think ultimately i will go with plain python instead of mono/ironpython/c++

#14   Oct 2014
[edit] I got interrupted while typing this, so some discussion occurred between when I started and finished. You can probably ignore the parts about Windows CE. But, the SDK is.NET, and as far as I know, no one has gotten it running under Linux using Mono. EZ really is a Windows ecosystem device at this time. [/edit]

The issue with Windows CE is that it really can only run apps specifically built for it (using the Microsoft Compact Framework) which hasn't been well supported since Windows Mobile 6 (replaced with Windows Phone 7/8 but CE has pretty much died on the vine - replaced with RT for tablets, and even that looks like it is dying out since everyone hated it).

EZ-Openbot is an option for the BeagleBone, but be aware that it doesn't support all of the features of the EZ-B, and is supported by a 3rd party and hasn't been updated since 2012, so it may be a lot of work for you to use (in fact, I am not sure it will work with a V4 at all since it doesn't have support for WiFi connection).

A lot of us are using the ACER W3-810 Windows 8.1 tablet for embedded computing. It is certainly bigger than a Beaglebone, but is relatively small and lightweight, runs full Windows 8.1, has excellent battery life and charges off 12 volts, so depending on how you are powering your bot, you could add a charging port and keep the computer powered as long as the bot has power, and has enough horsepower to run all EZ-B functions including voice recognition and video processing (although for some reason ARC errors on its built in cameras, but they are pretty crappy anyway, so not much loss).

Factory reconditioned ones have been showing up on flash sale sites like Woot for very reasonable cost lately.

Zap Brannigan
USA
#15   Oct 2014
I bought one of those ACER W3-810 Windows 8.1 reconditioned tablets from Woot on the recommendation of others on here and I have to say I was very pleasantly surprised in how well it works. I had to update from Win 8 to 8.1, install a bunch of security updates, and update the driver packages, but once that was done it has been awesome. The battery life has been fantastic. Maybe the best $112 that I ever spent.

Perses
USA
#17   Oct 2014
Because of the size, obviously, and because i already purchased a few beaglebones.


If several people got ezb running on python, or openbot, then there shouldn't be a reason why I cant take it a step further.

Perses
USA
#18   Oct 2014
My friends 3d printed a humanoid, but he's controlled by an exoskeleton.

I want to automate him


Plugging a windows laptop onto him will be adding too much weight.

Beaglebone is better imo. Easier to replace, Lighter, Less power, Can also control some servos. And you dont need a monitor to control it, but if you want, there is an hdmi hole for it. It can also, asily be controlled over the internet, through telnet, http...etc.

Here's Toby, . They won the national competition in usa, and were finalists in the world this year for the model.

#19   Oct 2014
First, we aren't talking about a laptop. We are talking about an 8" windows tablet that weighs very little (1.1 pounds according to http://www.engadget.com/products/acer/iconia/w3/specs/ I'll weigh mine tonight, because I think that might be shipping weight, not actual weight.

The Python library still requires the EZ-SDK, which is dotnet, so still needs Windows.

The OpenBot is open source, so IF it doesn't support WiFi connectivity today (I am pretty sure it does not), you could modify it (assuming you are a C+ programmer).


Looking at your diagram above, is the "Main Brain" computer always on? Have you already selected or already own the 4G device?

If the 4G device supports port forwarding, and the "Main Brain" is an always on windows computer, you don't need any on-board computer. Just connect the ARC on the "Main-Brain" to the EZ-B's through the 4G router (although you will need to know the current IP of the 4G router).

If you do already have the 4G device, maybe it would be easier to use the Beaglebone as a router/DynDNS machine behind the 4G just to pass data between ARC on the Main Brain and the EZ-Bs.

In this kind of architecture, you wouldn't need a portable keyboard and screen, instead you could use your Windows CE device or any tablet that can run a web browser or TeamViewer to connect to the main brain to send interactive commands.

I'd be interested in seeing if you're able to get the beaglebone to send commands to the ez-bs. I don't think it will be easy - as others in this thread have said, all the ez-robot software is really meant for Windows (or Android). There's not much (or any) support for Linux with it - it's .NET-based. It's meant to run with a Windows computer handling the heavy-lifting. If you can't get it working, I'd recommend picking up a cheap Windows tablet, it will do the trick and has a monitor built in.

With that said, I think your project is awesome! I want to see what you're able to do with that setup!

Perses
USA
#21   Oct 2014
@Chrissi, - Thanks, your positive view on this is inspirational.
- I really dislike windows, I get enough of it at work. We are trying to not use it. If This project works, this should open up your customer base.
I've seen an old meme online regarding the different operating systems and what they are good for:
Linux - Servers / Data Processing
Mac - Multimedia
Windows - Solitaire

For autonomous functions, it should not be required. the robot should function without a link. It should check back periodically for new changes / commands / updates ..etc.

B. Yes, We have the Portable wifi deices already, and they work as described.

C. We do not want to route it (It might open up security issues.

D. We am trying to avoid running it from the main hub, because it will defeat the point of being 'Free Roaming'
i:e. - In the bigger picture when it powers a vehicle, and the vehicle goes inside a tunnel and the Wireless connection is cut out. We dont want any accidents, thus it should run as a standalone. (Not saying that is what im doing with my current setup, but eventually we will be testing these types of prototypes, so we would like to start with a standalone model instead of altering it in the future)


If we have multiple robots mapping an area at once, we would like them all to have access to each other's maps, faces..etc.

Here is a funny picture that pseudo-represents the overall picture. 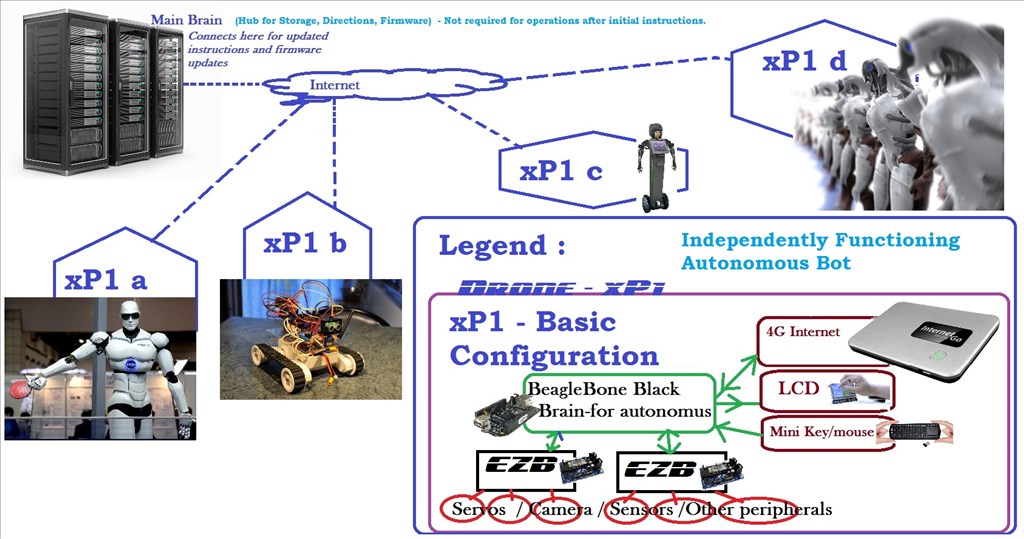 #22   Oct 2014
OK, looks like OpenBot is going to be the only solution without a Windows tablet or other mini windows computer, and you may need to modify the source if using V4 EZ-B (I notice from your RC Car picture in the other thread, you have a V3, so that should work with OpenBot as is, just not all new features that have been introduced since it was released).

Let us know how that works out. Not many who post on the forum have used it, so you will be a bit of a pioneer.

If you set your bar high, you will achieve great things.

#25   Oct 2014
Yes that's true, but I don't think Android apps will run on regular Linux flavours. Well maybe with some tinkering. I'm not sure.