First off, I changed my name again, and hopefully for the last time. (Previously Technopro, MazeHorizon0) Cardboard hacker is fitting as I almost never make a project without some form of cardboard!

Second! I am currently trying to come up with some ideas, simple or difficult, for myself to attempt. I plan on learning visual basic, and move to C# or Java after. Ideas for plugins, or actual robots or IoT things to build. Ideally this thread could spark creativity for anyone cruising through.

I also need ideas for my robotics club which will be introduced to EZ-Robot products. Ideally they will learn through the new scripting styles like Blockly and Roboscratch, and progress to the standard code. What I need is suggestions for simple projects they can work on to learn.

Hope everyone is doing alright!
Thanks,
Dylan

haha, you're hilarious with the username changes

I wouldn't recommend VB or Java. They're both somewhat out-dated languages and even though some companies still hold onto them for legacy code, C# is far more popular and powerful for applications and such.

That being said, there's lots of web dev and backend with python and ruby and other open-source hippy languages. However, development in those languages is a diluted space if you're ever looking for a job. Mainly because those technologies can be outsourced overseas to india for pennies on the dollar.

I may be a Microsoft fan out of limited options - but they certainly have the most complete, open and versatile OS and programming environment. There are no IDE's that can compete with Visual Studio. And when combining productivity, versatility and completeness, you cannot compete with C# .Net.

This isn't to say that other languages don't have their strengths. However, i combine productivity, versatility and completeness because that's what you need to get the job done.

I am a fan of your cardboard robots.

I have always wanted to build an old fashion-style boxy robot out of coardboard, but time isn't always on my side :). You know people dress up as robots with cardboard boxes? 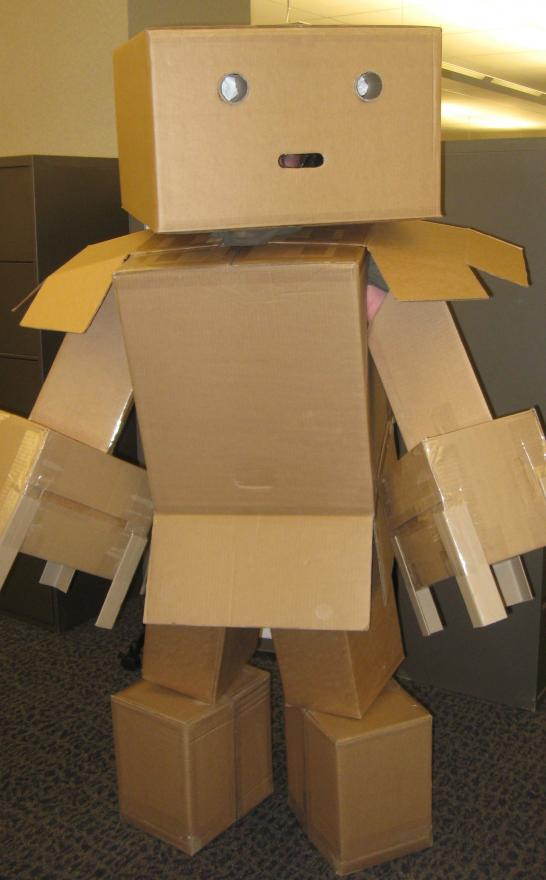 Well, how great would it be to have a small version of that which walks around your desk? A cardboard JD, i guess you could say

PS, document the build. This week we are putting up The Robot Program website, which is featuring "how to do stuff with robots". If you do build a cardboard robot, emily (the host of the program) will most likely want to interview you and post your instructions for teachers in schools to use.

#2   Feb 2017
Perfect! Sounds like something I can do! Will be awhile as the club learns everything but after the learning phase that's the challenge!

#4   Feb 2017
The robotics club originated from the teacher at my high school. We normally participate in the First robotics competition(lego mind storms), and all past members are graduating. He wanted me to teach the newcomers how to use mindstorms. I agreed, but I knew everyone would grow old from mindstorms.

That's why I proposed I bring in my Ez-robot stuff and show everyone the better side of robotics. Teach everyone the more advanced stuff.

The idea was I could challenge them to something with mind storms, and once they were done that, move them to better Ez-robot products! And of course, give them a challenge!

Oooooo! Talking about this gets some juices flowing!

#5   Feb 2017
That's really excellent! Let me know when you get it going - i'll connect you with emily for a skype interview one day. It'll make a good story for The Robot Program how you went from building your first ezrobot all the to way to running a robot club and teaching ppl