Hey, has anyone tried out a PC Stick to run the EZB. I think it would open a whole new world as they become more powerful.

I am thinking of using one on my second robot Sam. Sam is a Roomba platform.

#1   Feb 2017
Exciting possibilities. I found this review of the top 7. Just out this month Top pick was the Intel Compute Stick CS325 Computer with Intel Core m3 processor and Windows 10 :

Edit: I found this excelent review of the Intel Compute Stick CS325 that may answer some questions about if this will run our EZ Robots:

because i find screen, mouse and keyboard to be surprisingly important for PC's

#4   Feb 2017
@Ellis,
I can tell you from experience that the 2nd Generation Intel Compute Stick BOXSTK1AW32SC works fine running ARC for Windows and easily meets the minimum specs.

Its $126, but of course you will need to add an HDMI monitor, keyboard and mouse as DJ pointed out for development

If you plan to use it as an on-board headless computer for your EZB V4, please note that the power supply is 5v @3A 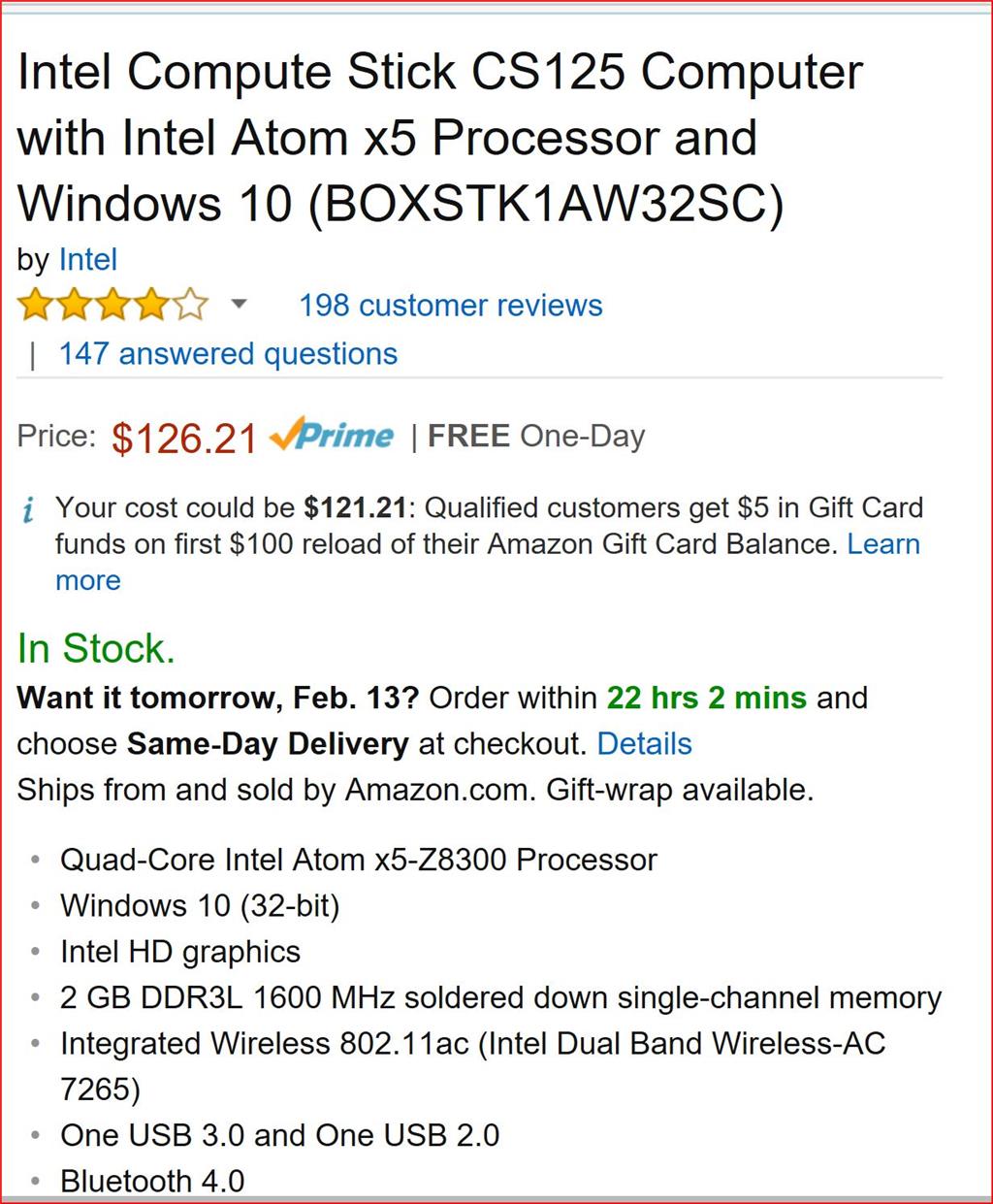 #5   Feb 2017
Ya, gotta agree; there's better choices dollar for dollar, watt for watt. What's exciting about this is the size and power.

I'm no expert but I took a look at reviews and other platforms out there. From what I read the PC Stick needs to evolve and come down in price to compete for power users to be interested and not disappointed. Of course there are always the guys out there that want the latest and greatest. God bless them because they are the ones that make it possible to push the technology forward. If I wanted something small, powerful and able to do what I need right now I'b be looking closely at Intel's Gen 6 or 7 NUC. Prices are high but they will only come down.

#6   Feb 2017
Pricing has been a issue of intel for quite a while. They still price consumer components as if it's the 1990's when their product was in demand due to increased computer sales.

There isn't much demand for consumer market and even smaller demand for hobbyists/inventors.

It would be great to see Intel revisit their roots of the hobbyists and inventors from the late 70's and early 80's during the personal computer evolution. Their prices were affordable enough back then for small scrappy startups to invent stuff with their hardware.

Intel has one foot in the diy/iot market with function (i.e. Joule, Edison), but their other foot is in the bank. That's the result of a short sighted vision by one half of the company that isn't correlating with the grander vision.

Msrp pricing of Intel components isn't much more than their manufacture partner pricing - which makes products that incorporate their components to be costly for the consumer, and they fail. For example, their partner pricing negotiations of the joule are entirely handled through mouser's web portal. So the pricing that you see, is the pricing ezrobot would get. There's no product lifetime volume pricing agreements...

Intel pushed the "wow someone made a smart toothbrush with the Edison!" Marketing strategy for a while. But they missed an important part! The fact the tooth brush existed is neat, but the real fact that the tooth brush doesn't sell and is too costly was overlooked.

As an entrepreneur, I'm sorry to say to any hippies out there, but the bottom line of finances is important. Without having enough profit from revenue to operate, you end up with no support staff, poorly supported product, lacking manuals, and little to zero improvements/upgrades. The product fizzles away and vanishes *poof*

Ezrobot identified that with the joule in August at idf16. Hundreds of man hours, totaling tens of thousands of dollars were spent on developing an exciting new ezb v5 proof of concept using the joule. Wow! A full windows 10 pc in the ezb? It'll be great for education and hobbyists! Robot is a single purchase, not requiring a pc!

So we thought.... during development, there were no pricing available, even to nda'd partners like ourselves. The day of the event at idf16, where ezrobot presented the only complete ready-for-sale product with the joule, the pricing was announced. Well, the pricing shocked us! Jeremie was speechless. It was beyond our worst case scenario. There's no way we could manufacture it. An ezb would end up costing $500

It didn't get much better. We wrote to intel about the disappointment and concern for the joule product's future. I pitched that ezrobot should be a lost leader to promote sales and usability of the joule. I never received a response.

There was one intel employee who believes what ezrobot could have offered the joule, but his power was limited.

So, long story short... intel gets its revenue from CPU sales of server hardware for data centers. Now their manufacturing ability exceeds their volume, so they announced to rent out factories to ARM

Well, isn't that ironic? Here's intel with a super high price point, renting their unused facilities to an iot industry dominator, arm, which sells at a fraction of the cost. Meanwhile, intel is still attempting the iot market. You'd think someone leading that division has enough common sense to see that they're doing it wrong.

On that note, any non-intel certified hardware that runs win10 is your best option for price. Anything with intel's direct endorsement will break the bank.

What I am thinking is putting the computer on my ezb or save space on my bench.

I was wondering if the intel cs125 shows any slowness when running large ezb programs?. I noticed it had only two GB of DDR3L My robot is powered by two 12v lead acid batteries and I am using a voltage regulator to reduce voltage to 5v.

I guess if it doesn't work I can use it on my TV.

Ellis
USA
#10   Feb 2017
Hey Frank, did you see my previous post about showing slowness. I am ready to pull the trigger on this and wanted your opinion.

#11   Feb 2017
Hi Ellis,
I understand your concerns about speed and all I can say is that this device has about the same specs as a low end Intel Atom based laptop.

I guess it depends on what type of complex scripts or image display work you plan on doing on the main computer.

However, I defer to those having more experience in determining what is required.

Ellis
USA
#13   Feb 2017
I just received my Intel cs125 Compute Stick. It seems to run a little slow but usable. I really am having a problem with voice speed. I know it is a windows issue but no matter how fast I turn it up in windows it stays slow. You could go to sleep listening to it.

Is there something I am missing? Any help would be appreciated.

Ellis
USA
#15   Feb 2017
I am using a Bluetooth speaker with Windows. The ezb speaker is to small for good music and voice. I hope I am understanding your question correctly.

#16   Feb 2017
Hello @ellis
I have not been using the PC speaker on any of my robots, so it took me a while to run a test for you. I normally use the EZB v4 speaker

I'm now using the Intel CS125 with a JBL BT speaker. Music plays fine both using the native music player in Windows 10 (Groove) and through the Soundboard EZB Builder control

As for speech, I have tried both a script with SayWait() and the Speech Synthesis control and the speed seems normal. The only issue I notice is that that if I'm saying multiple sentences that part of the first sentence ONLY is missed

Its almost like the BT connection needs to be reestablished

Also, I'm not clear on what you meant be speeding the speech up?

Can you look at task manager to see how busy the CPU is?

Also, maybe try using the native music player as a test to isolate any issue with EZB