Intro, Plans, And Some Questions

My name is David, (un)known on the internet as Irinir.
I join you from fair London (the UK one).

And I want to build a robot. I'll name him Munnin (like the raven, memory).

I'll use this little thread here for a progress journal of sorts.

A little preamble and then my goals for the robot.

A robot as a companion, aid and enhancer for human life.
I believe at some point in the future we will have a personal robotics environment very much like the cell phone one. Some people will have this or that brand, one personal and maybe some to care for the house or some such. I also think there will be quite a few "authors" around, and what they'll do is either robots for very specific need niches, or robots super personalized for people willing to afford them. But most people wont have any idea of how robots are built or how they work (like now really). People will take them for granted.
I, however, quite like to know how stuff works (been building pcs since forever, I tend to break apart interesting stuff to see how it works, etc), and quite like the idea of having a ever growing machine as a... pet? Companion? Familiar? (We'll go with familiar).

And as such I started my research. And ended up here.
I bought JD. It was the only option really, even if I don't think the humanoid shape is really how my robot is going to end.

1 - The robot must move in a relatively fluid way, with minimal noise.

2 - The robot must be easy to configure, add, change, remove parts, so that hardware maintenance is as painless as possible. Especially if the parts can be 3d printed.

3 - The robot must have software that can be expanded, built upon, improved, modified, used in as many platforms as possible.

4 - The robot must be as autonomous as possible.

5 - The robot must be able to do tasks. Adding or removing tasks should be easy.

6 - The robot is never going to be the size of a human, but navigating a world built for humans easily would be the ideal.

7- Interacting with the robot must feel natural, both for me, as for any strangers.

Right, these are the goals. You can easily see how I landed here and actually decided to buy a JD.

I received JD. I had to leave for work in a couple of hours, but still managed to put it all together. Controls ok from the mobile app and no issues connecting to him at all.
No such luck when trying from the pc. Maybe it's the wireless dongle I have ( a very bad belkin thing I bought years ago) but the computer can't seem to connect, or when it seems to do so, tells me to update the bot OS. The firmware update tool fails to connect to the JD.
I've read and saw most of the videos about it, but nothing seems to give me a answer. I copied the error log.

Have you selected the correct EZ-B COM port? Use the Help menu option to view the online help and watch a video demonstration.

If you are considering contacting us, ensure you have followed the tutorial first. You may find the tutorial by pressing HELP from the menu. If you still feel necessary to Contact Us or post on the forum, we will require a copy of the debug message by pressing the Edit menu option and pasting the debug window contents to us.

Nearly every issue is resolved by properly following the tutorial and ensuring you have the Microsoft Native Bluetooth Stack. This software is not supported in a Virtual Machine.

What in the world is Microsoft Native Bluetooth Stack? Does it come with win8.1? Do I need to download it from somewhere?

Also the bit where it asks if I selected the correct AZ-B COM port... it only gives me one option, COM 1.

I had to leave for work by then.
Any ideas or suggestions are appreciated. Dying to get out of here and have a better go at it.

After @WBS00001 suggested to use the phone to change the wifi mode, I easily connected the EZB to my usual network and got it working. Tinkered around with it a bit, but didn't do much yet.

Yesterday I ended up playing with the normal JD a bit more and explored what it can do.

Then I dismantled him and started toying with shapes and configurations.
What I ended up with is this. 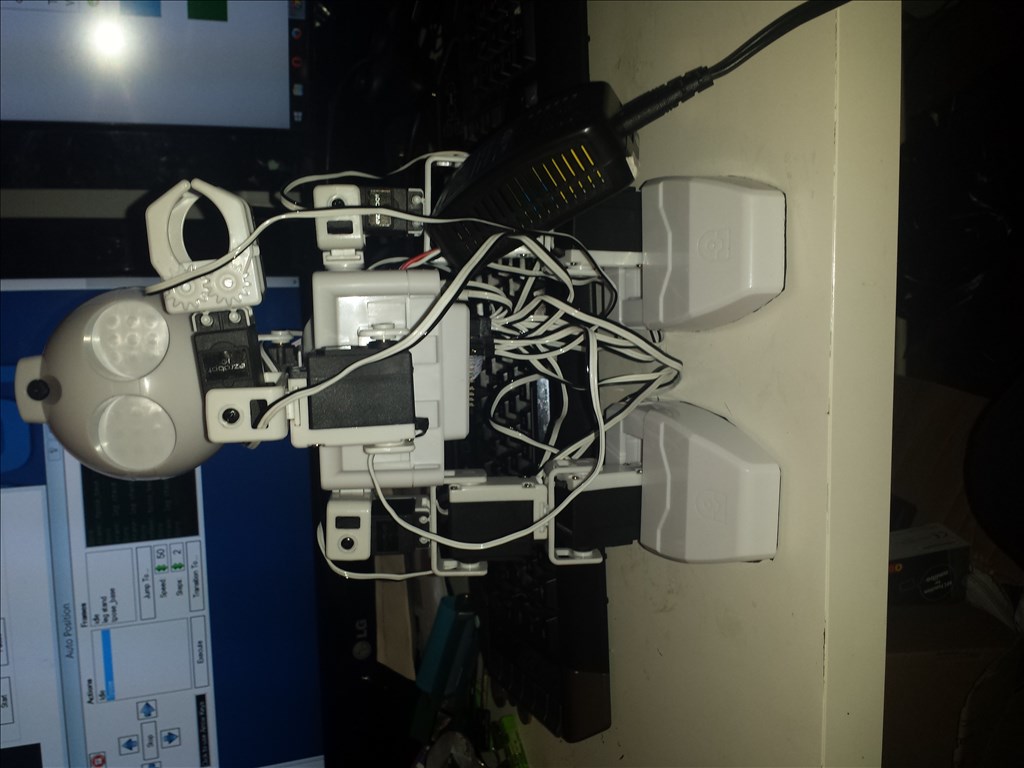 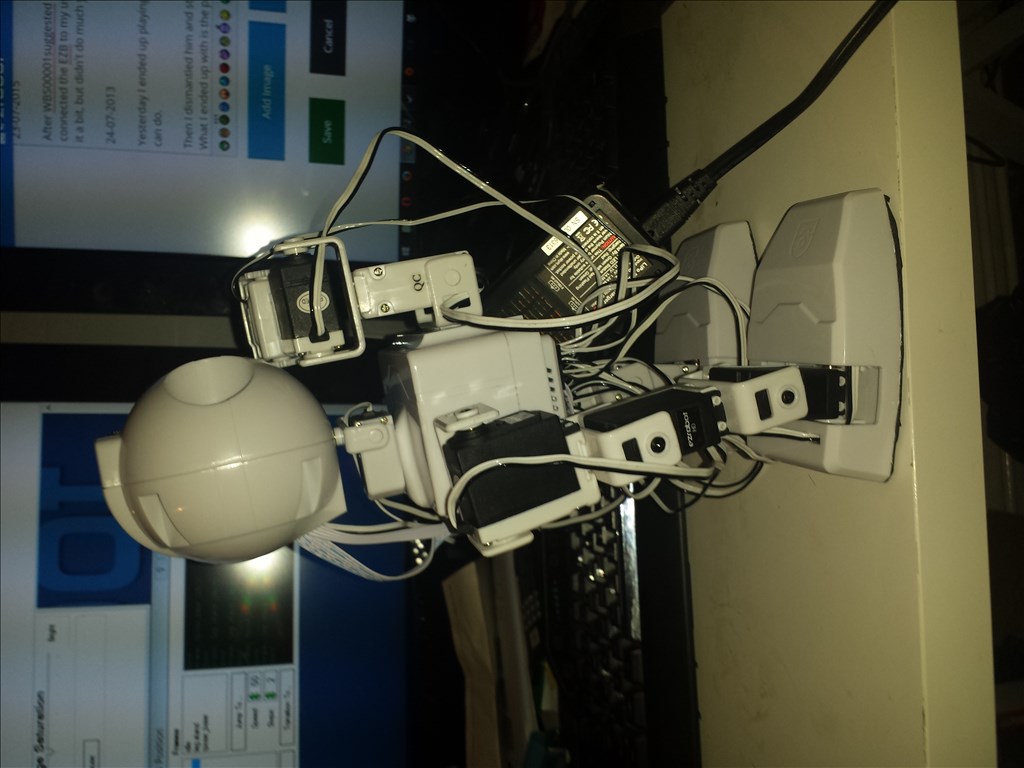 After experimenting with poses for a bit, a few things are clear:

1 - the top servos need to be "stronger". They can't support the robot weight by themselves. And I suspect they will need to, to make the walking smoother.

2 - The claw at the front needs to go. I still think I'll need no more than 1 claw, but it must be placed at the back, and have more servos so that it can reach further. Like a scorpion really.

3 - In the pictures above the robot is almost vertical, but walking will look quite different I think. Something like this video:

4 - At some point there will need to be a 360 servo where the head is mounted now, and a... platform of some sort on top of it, with the camera, etc, attached. Perhaps the claw can be attached here instead of the bottom. 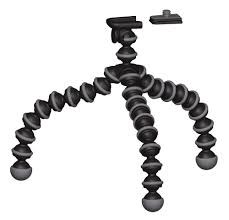 6 - I need to start thinking about a solution for power, the battery that comes with JD has several issues, first, I can't recharge it while the robot is on, second, it lasts almost no time at all.

7 - Making all the frame poses is going to be a pain in the ass. Totally worth it.

bborastero
Gibraltar
#1   Jul 2015
forget Bluetooth JD and your computer are connected via wifi through the router.
I suggest you go through the tutorials first. http://www.ez-robot.com/Tutorials/

All lame humor aside, greetings David. Are you using the latest version of ARC to connect with JD? As bborastero said, it connects via WiFi, not Bluetooth.

Irinir
United Kingdom
#3   Jul 2015
I was going through the tutorials.
Yea, it's wifi, hence my confusion about it.

Any idea why it can connect ok through my phone but not on the pc?

Any idea why it can connect ok through my phone but not on the pc?

Most likely because with your phone you are connecting to it via AP mode. That means the EZ-B is sending out it's own WiFi signal and your phone is connecting to it. That's the default mode. Your PC is most likely connected to your own WiFi system. It can connect to EZ-B using your WiFi but you have to set the EZ-B to "Client" mode, then let your network give it an IP address to connect to your PC with. You can then find out what that IP address is and put it in a connection setup in the connection window in the ARC program on your PC. You will need the ARC app running on your phone to facilitate the changeover from AP to Client mode.

Irinir
United Kingdom
#5   Jul 2015
Totally right. Changed the Ez mode to client from my phone and already playing around.

Thank you so very much WBS00001.
I'll come and annoy you lovely people again when I have either something to show or a new problem.

#6   Jul 2015
@Irinir
You're welcome. At least I can put my insomnia to good use occasionally.

#7   Jul 2015
Welcome! So glad you were able to work out your connection issues. The folks on this forum are great about helping out with problems. We hardly ever come across someone that has a problem that can't be helped. Sounds like you have great plans. I'm looking forward to seeing them take shape. Here's a quick and simple tip; Look over other people's robots and download others ARC projects for ideas and how they make things work. Their a tresurer trove of valuable information.

First, Welcome to the community. As has already been said, there are a lot of great people in the community who are willing to help out when asked. Don't hesitate to post any question you have.

Second, I will be watching your progress on your project. It is very interesting.

WBS00001, good job dude. Happy to see you help out here. I see you being a very strong asset to the community. You get what is happening really well and where it is happening. This is very valuable knowledge to have.

#9   Jul 2015
David welcome to the forum and good luck with your EZB adventure. As you've already noticed, there are many knowledgeable and very helpful members here to offer info when needed.