Help With Connecting A Serial Device

I'll try to make this quick and to the point. Trying to interface a device that has a rs-232>ttl converter attached to it (the device is like a controller). I attach the signal from EZB D0 to the RX on the ttl converter. The red LED lights with a small green flashy led on the converter. So far so good. I'm not sure I understand all the functions on the serial terminal, so i skipped and went to the sendserial command to try and get it to work. The device uses baud 19,200 to communicate. The device uses several commands, each command is preceded by a ">". IE to send a command to trigger and play a track would be:

That would play track 0 or the first track. So I wrote a line :

I get no error in my syntax, and i do see the blue light go on the ezb when i start the script, but nothing happens on my device. I am sure everything is working on the device, as i tested it all before i connected the ezb and its fine. Maybe I just have no idea how to write the proper code, or perhaps I need some other wire to be connected to the ttl converter. Hopefully I can get it working with some suggestions. I feel I am close.

Below is an image of the ttl converter and my pin on the rx. 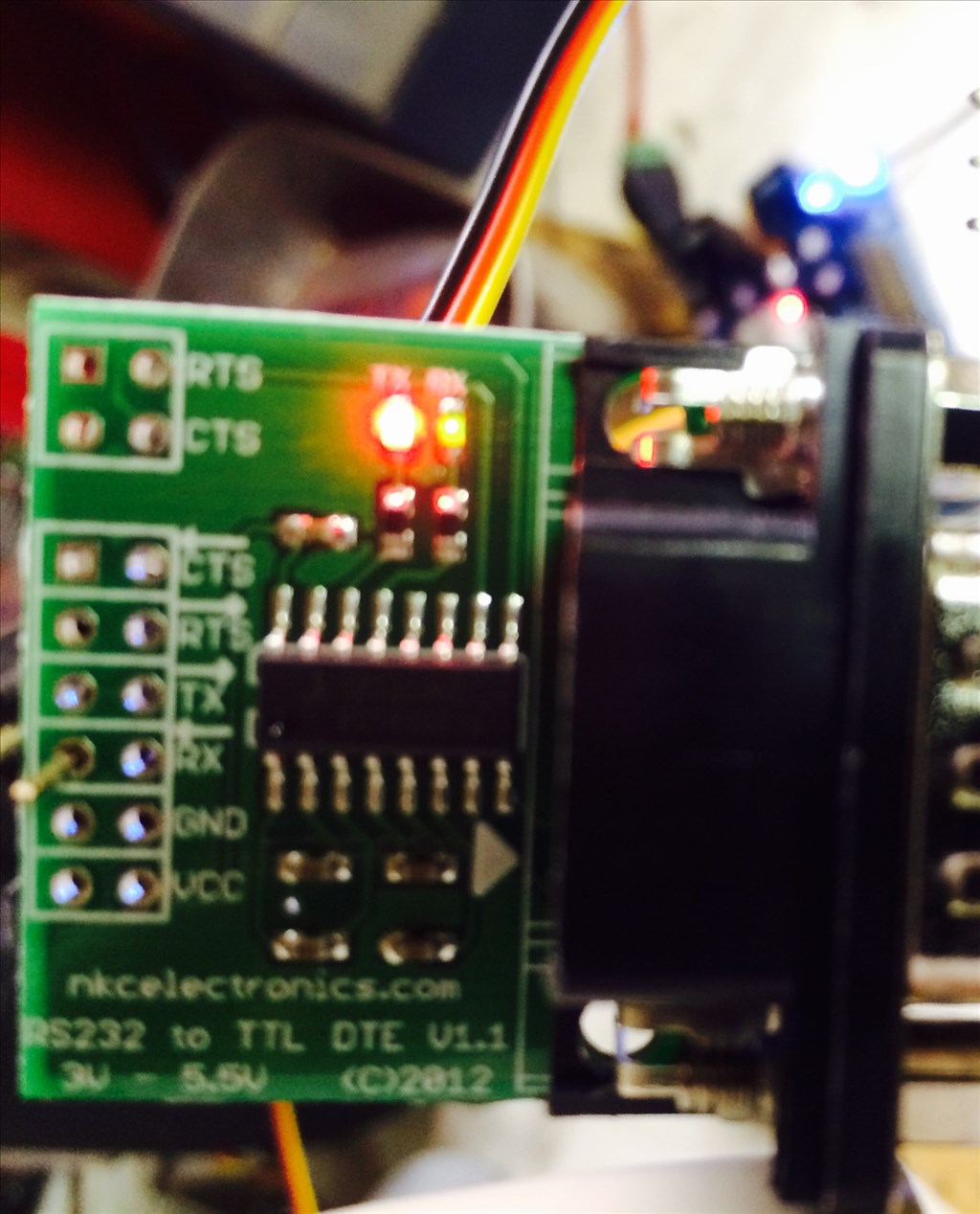 Based on your post activity, we found some content that may be interesting to you. Explore these other tutorials and community conversations.
Show all 21 comments
Load More ...

#2   May 2014
Thanks DJ. The documentation is quite sparse. In fact its the reason I'm poking in the dark. Here is the all the info from their manual, but i will try and add the returns to see what happens:

>>The serial port operates at 19.2kbps, 8 data bits,
one stop bit, and no parity.
The port implements
a standard RS232 interface and conversion circuitry may be required to interface to a TTL
serial port (e.g., Basic Stamp or other microcontroller).

play <track number>
This commands starts playback and requires an
argument that indicate
s the number of the
track to play (e.g., the fi
rst track is track zero).

or in hex it would be


Here is a reference chart for ASCII characters and their respective Decimal or Hex values:

#4   May 2014
DJ beat me to the code. Send it through a EZ Script just like that and see what happens. When I was struggeling with getting my Kangraroo X2 working I had to place that Return code at the end. I found I didnt need the New Line code but your device may be different.

One other thing Will. If you only have one wire connected between EZB and the RX of your device you may need to run a ground wire between the two also. So run it from theground pin of the same Digital port your sending from (use D0) to the control side ground of your serial device. Maybe that will help.

#5   May 2014
@Dave is absolutely correct. You must have a shared ground for serial communications.

#6   May 2014
Interestingly, as I connect the ground from D0 to the ground on the ttl converter, all the LEDs go out on the board (ttl converter board). Still having trouble sending commands. I've shot off an email to support waiting to hear back from them.

#7   May 2014
Thanks guys, still waiting to hear from them. Here is another question. More for DJ I think. Is there a way to control another program running on the same PC that EZB is running on. In this instance, lets say you want to have EZB control the triggering of events, using say visual basic, or powerpoint etc. ( the software uses Active x). The device software i'm using allows control of the software (not hardware) using a console software solution. This is not an ideal solution as it must be tethered to the computer. But also asking out of curiosity.

Another option is the hardware has a built in IR controller. So you can send commands with a stardard handheld tv remote control. Sooooo, possible to connect an Ir transmitter of some kind to the EZB? Is there an i2c or other hardware IR device the EZB can control?

Edit 2: Ok i see there is an IR reciever, in i2C folder, can a trasmitter used as well?

#8   May 2014
There are a few ways to have ARC control other software, or at least "talk" to it. Telnet, http, UDP broadcasting and even running of software (which could include macros etc.)

I'm sure DJ has way more experience and advice on these methods than I have as I've only really briefly touched on them myself (it's always been on the list of things I need to look at but always been bumped down the list by something else so I'm not 100% clear on ARC's capabilities).

As for the original question, I think everyone else has covered everything I would have said anyway. The only additional thing I would say is, and I don't think it makes a scrap of difference but it's what I did with the TellyMate when I had a few issues, is to break down the data. I suspect doing so must have fixed a syntax error in the data that I hadn't spotted but it may have more to it.

The data sent should be exactly the same as DJ's example however, like I said, when I had a few issues with the TellyMate doing this seemed to fix them but I am pretty certain it was just really a case of redoing it fixed an error I overlooked. For the sake of a copy and paste it's worth a shot though.

#10   May 2014
One other silly thought.. I have a USB to TTL adapter that has the tx and rx lines mis-labeled. Maybe this device is from the same manufacturer and they mis-label consistently? Try connecting to the tx instead and see if it hears your signal.

Dunning-Kruger
Canada
#11   May 2014
Good point Alan... Used to need to use a "null" modem adapter when communication to two serial devices (swapping the Rx and Tx so that the devices weren't receiving and transmitting on the same pins))

#12   May 2014
Ok I heard back from them. They were making sure I had it connected correctly. And added that I need to be sure to send the line end (in C++ this would be "/r/n"). Also that I need to drop the ">" which is simply the prompt if you open up in a serial terminal with tx and rx active. I I will try a couple of new lines today with the changes and try the tx/rx switch around, ground etc. If I knew I had the code right then I could work on making sure the the hardware was connected correctly. Too many variables to change at once!

I'm going to need some help here. To recap, the manufacturer of the device have no docs beyond the serial terminal usage. Ther are no libraries on using serial commands (via ttl). So I scoured the internet for anyone using this device. I found one guy who owns a prop house who actually wrote some code to use a controller with it (PIC). You can read below his email to me. If anyone has programmed the pic controller and knows how to transfer this code to match what you need to do in the EZB serial commands, please help me to get this to work. He randomized playing of his routines. I want to play "x" by send the code. But it seems everything is in his code adn directions. Any help figuring this out I would be grateful.

His email and code:

I was using a PIC microcontroller to monitor n IR sensor and then tell the
Rapu unit to randomly choose one of 7 routines to run. Looks like I send
a cr character first (ascii 13) but not exactly sure why I do this. (I
wrote this years ago) Here is the routine I used:

To explain a little (so you can try to follow what I did to work it out).
His code is sending a carriage return (13 in his code, 0x0D in mine) then the word play (done with dec. for the ascii characters one by one in his code, then a space in dec., then the track number (again in dec.) and followed by another carriage return in dec.

If you wanted you could use just the hex i.e. for track 1

Like I said, I'm no expert and outside of my actual knowledge so it's guess work... Let me know, I'm interested in knowing if I assumed correctly.


Edit: I used the wrong hex for the CR, updated above.


Edit: I used the wrong hex for the CR, updated the above.

#17   May 2014
Well those all look like they would work, but I still got nothing. I'm going to make sure all the hardware is connected correctly. With the ttl converter. I also want to see if i can get the new serial wi fi terminal to work to make sure the hardware is connected right. When I run the RS-232 to USB to the computer is works just fine. So I know everything is right upto the ttl converter.

#18   May 2014
I'll look again in a bit, I have to admit I was feeling like death warmed up last night and know I made a few errors (which I think I corrected last night). I'll sit down with a coffee and have a proper read of everything and see what I can figure out.

#20   May 2014
Nothing keeps me down for long. I expect it's just a mild case of exhaustion, nothing too serious

OK, taking the other guys code apart piece by piece and converting over to EZ-Script commands we get this;

That's a lot of lines for not very much. It may be that those 10ms delays between each character being sent are important so I'd try that one first.

To be honest, if the above doesn't work I would concentrate on checking the wiring is OK since, at least in theory, the above is pretty much the same as his code.

If that works we can look at condensing the code to something a little less overwhelming and easier to work with. i.e. SendSerial(D0,19200, 0x0d, "play 0", 0x0d) which it seems is what I come up with yesterday...

Going back over older posts, the above is pretty much what DJ suggested to start with (but with the exclusion of the > before the play command and a carriage return before the command).


Try the long code with the sleeps. If that doesn't work then it's a case of triple checking the wiring.