In order to use this app, you need Synthiam ARC software. 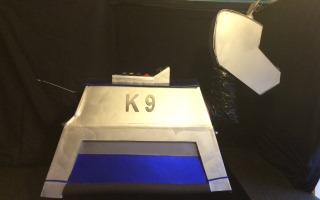 This is an ongoing project for K-9 2.0 which revolves around the pandorabot control and mobile control for use with an iPhone. some of the scripts and controls include...

. Pandorabot control which is connected to a bot I created which includes control commands inbedded within the

AIML bot code. I use this as the voice recognition control.

. Script manager which contains all the major control scripts which K-9 uses for movements and functions.

Mobile control which I use with an iPhone using a screen mirror remote to connect the iPhone to the PC and execute functions.

Custom Movement Panel which is connected to a 10 amp H-Bridge.

More controls and scripts will be added over time such as camera control and scripts which will hopefully control smoke ant external tempreture sensors.

*Note. Everybody is welcome to use anything in this project, but adjustment will probably need to be made, such as servo values, to suit your robot's needs.