Download EZ-Builder
Software Information
At Maker Faire, Texas Instruments gave me an eZ430 programmable watch! It's a very cool little wrist watch with a built-in accelerometer and awesome other functions. I couldn't wait to get back to the hotel and add support for it in EZ-Builder!

This version of EZ-Builder supports the eZ430 accelerometer. It can be configured to control specified servos, much like the Wii Remote EZ-Builder Control.

There are some additional commands also - such as random scripting commands for PWM Random and servo Speed Random. 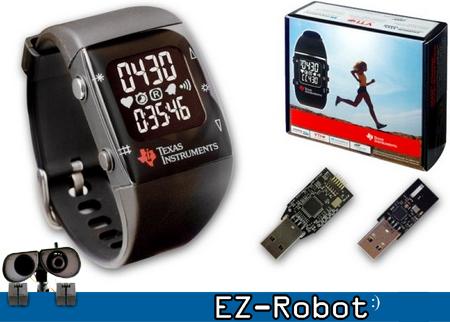 #2   May 2012
Is this what you are doing with your time in California? You should be sight seeing. Enjoying the beautiful weather. Need a guide?