Rarely found on Ebay but here is one now. Snap it up!

Troy
USA
#2   Sep 2013
I wonder if it was someone here.
Well there is one more that's there for bidding. I imagine it wont be as cheap.

If you miss that one you could always get this one (LOL) or this one and those with deep pockets go with this one.

#4   Sep 2013
That last one would be for the full sized R2 builders. They make some amazing robots that look just like the real ones.

Hush about the Ebay one. Don't spread this around.

Troy
USA
#7   Sep 2013
Wha? Had to be someone with deep pockets. Maybe a ghost? LOL
Honestly, I dont think it's worth that much. Soon someone here will 3D print a better head.

Troy
USA
#9   Sep 2013
Sometimes I see them on Alibaba.com but I dont know how trustworthy that site is.

jstarne1
PRO
USA
#11   Sep 2013
It's called bidsniper , it waits till the last 5 to 10 seconds and places bids one dollar at a time till you win or hit your max set for an item. It's a sneaky way to steal a auction win and reduce your cost because there is no time to fight over it. , would you really spend 71 dollars on the head @aamerlis?

Troy
USA
#12   Sep 2013
@aamerlis, Yeah that's way too much. If it's more than $60 that included shipping then it's too much. Besides, youre awesome with 3D drawing and can do so much better.

#13   Sep 2013
ebay will always end $1 above the penultimate bid (sometimes more depending on final price), it's how it works. Put in a max bid $1,000 above the next highest bidder and it'll still be only $1 above. The auction sniper most probably put in a bid of $75 or $80 depending on how much he/she wanted it knowing full well that ebay would only increase the bid by $1 over the next highest bidder.

Putting in random or non even bids on ebay is pointless and only helps you if you are the final bidder for instance bidding $72.58 and the next highest is any value below that. It's "automatic bidding" and it's been part of ebay for over a decade, if not since day one.

For instance, if there are 2 bidders. The first bidder places a bid of $50 for the item but the starting price is only $1 the highest bid will be $1.
Bidder 2 comes along, sees it's only $1 and tries his luck, places a bid of $3. The automatic bidding of bidder 1 will automatically place a bid of $4. Bidder 2 will instantly be notified that he is outbid. The next minimum bid is $5, so bidder 2 trys again and again, increasing by $2 each time ($1 for bidder 2, $1 for bidder 1's automatic bid).

However, if bidder 1 (or a new bidder) comes along and bids bidder 2 will not increase since it is at it's maximum.

If bidder 2 had a max bid of $49.99 in the above example, bidder 1 would auto bid at $50 and be the high bidder despite it only being $0.01 above bidder 2. Automatic bidding can beat another bid by as little as $0.01 even when the minimum increase is $1. The minimum bid increase is for manual bidding only.

That's how ebay works. If you want to beat a sniper, place an early bid of the maximum you will pay and leave it.

Waiting until 2 seconds to auction end is a very old method and has poor results unless the sniping bid is over the true value of the item. Bidding early with a fair and accurate bid is more likely to get you the item.


It's a little different if a reserve is in play too though.

On the auction there is a link for the number of bids, click it. Then on that page it shows all bids. Look in the top right, there is a link to show automatic bids. This can be useful to look at and see what other bidders are maxing out on. Even values or random ones. If they are just having a cheeky bid to get a bargain or are serious.

Here's one I won a few weeks back; 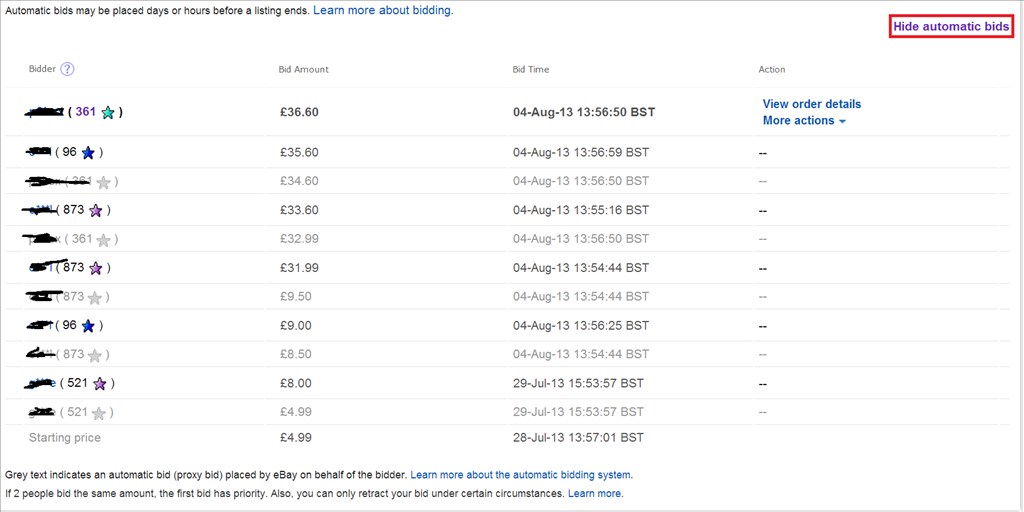 My max bid was £40. The snipers tried it on but because the price was low and my max bid was much higher they stood little chance of winning it. You can see the proxy bids (auto bids) in light grey. You can also see that the auto bids were all £1 over the next highest bid.

#14   Sep 2013
I have one I'd sell. All the electronics are removed. Only thing left is the motors and pots. I've also soldered longer wires and added jumpers. So basically it's ready to be used with the EZ-B. I've got to many projects going to continue working on it. 30 bucks plus shipping.

tevans
Brazil
#17   May 2014
Freinds.. I just got the Mr. Clock head I bougth from our friend Steve.
But, I need a hint about how to wire it up. I think all the motors are working, but I do not know how to conect them to ez-b..
any help please ?
I would not like to remove those and put microservos...
thanks!
tevans

I haven't tried to access the original CPU or h-bridges on the main board.
FYI, I ran into problems with the neck motors having too much looseness. You can see that in one of my clips on my project thread.
Login to post a comment