Confused... I have four 4-in-1 Orientation Sensor that match, exactly, the PCB depicted in the DYI picture marked "coming soon". I don't find this sensor in the list of my builder. There is the Gyro, the Accelerometer, and the 9150, and the 6050 but mine isn't there. I find plenty of articles about these things failing, and I read the article about how to convert the voltage returned and the sensitivity issues while performing the calculations. I actually understand all of that but in videos about the sensor, apparently, we don't need to do the calc's because the VB4 does it for us. I would need the specifications data to use this sensor on a Stamp but here, I don't. What I need to know is which sensor do I select for this unit if it isn't here yet. Since I have four of them, I'm kind of interested in how I INIT it. Use the 9150? That would be fine but is that why others fail? None of the PCB's in the PROJECT/ADD actually match these that I have and I can't find any other data other than coming-soon.

The 4-in-1 Orientation Sensor is the MPU9150, and yes the picture is different.

Doron
USA
#2   Oct 2017
Okay...Thanx ptp, and another question if you don't mind, is there any information as to why there would be a different picture there, at the store, but not in the builder software where it would be a good idea to have accurate info? 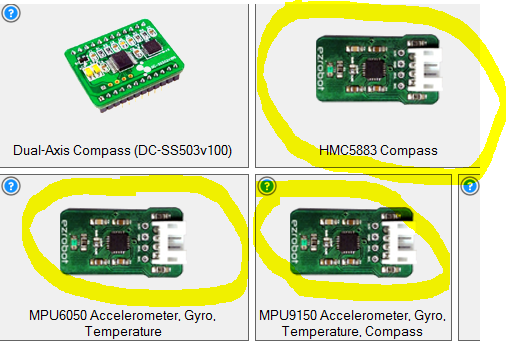 If you notice all the 3 sensors have the same picture.
I do not work for EZ-Robot, but I will try to make an educated guess:

The ARC control exists before the 4-in-1 sensor, due to so many different PCBs i believe they choose a generic pcb picture to align with the EZ-Robot brand.

MPU9150 is deprecated the MPU9250 is the new replacement.

If EZ-Robot releases a new 4-in-1 sensor based on MPU9250 or in another chipset is always good to mention the chipset versus a generic term 4-in-1.

Doron
USA
#4   Oct 2017
Thanx, again, ptp...I did see the mention of the same chip-set but expecting changes had been made (since the PCB and components had been revised) to an alternative plugin. I was looking for the script handler for it. As there isn't anything specific for the board I have, I expect, as you suggested, the existing file must be it. I have four of them and several robots...not willing to let the smoke out of one on a hunch, I thought I'd ask if I'd missed something.
In the lesson video for this "plug-n-play" device, Overlord says it's designed for the JD and he shows it placed in a slot on the bottom of the body. Turning that chip over means the serial-data will be incorrect according to the spec-sheet. If this sensor is not placed upright, what change to the code needs to be made?
Is there a selection in EZ-Build to select up or down? I haven't got there yet, I'm just wondering. None of those guys talking about bad data mentioned how they had oriented it. The temperature range is -40C to +85C and, apparently, returns 8.72mV/C and should work fine. I think most of the community queries I read were over a year old...maybe that's fixed now. This board is laid out brilliantly...but it looks like it must be oriented with the pin-header forward and chip on top. Bless those EZ-guys for putting the orientation marks on the silk-screen.
As you mentioned, Digikey lists this version of this chip from TDK manufacture as obsolete and the new version is the MPU9250 and alterations are internal so the board won't change, much. When I found these sensors at a local outlet, I bought all they had. The spec-sheet for this thing is 50-pages. It does a tad more than just what it says in the store. Again, thanx for the shout-out ptp.

If this sensor is not placed upright, what change to the code needs to be made?

None. It measures relative position (movement), so can start in virtually any orientation. Note, the compass needs to be calibrated on every startup if you are using that by moving the robot in a figure-8 pattern (much like calibrating the compass on an Android or iPhone, which must be done occasionally), so on larger robots is not of much use, but the other sensors work great without calibration.

#7   Oct 2017
The information is accurate. It is impossible for any "convert voltages" - not sure where that information came from, or how you understand it. However, there is no need to convert voltages because there are no adjustable or convertible voltages on the product. Good news, you simply connect it and use it

The information for every product is in the product page in the GETTING STARTED tab. Visit the page for the product, which you have displayed. Here is the link for convenience: http://www.ez-robot.com/Shop/AccessoriesDetails.aspx?prevCat=104&productNumber=1359

In the Getting Started tab will be the information for the product on how to use it. It will contain links to tutorials and activities. Have fun! 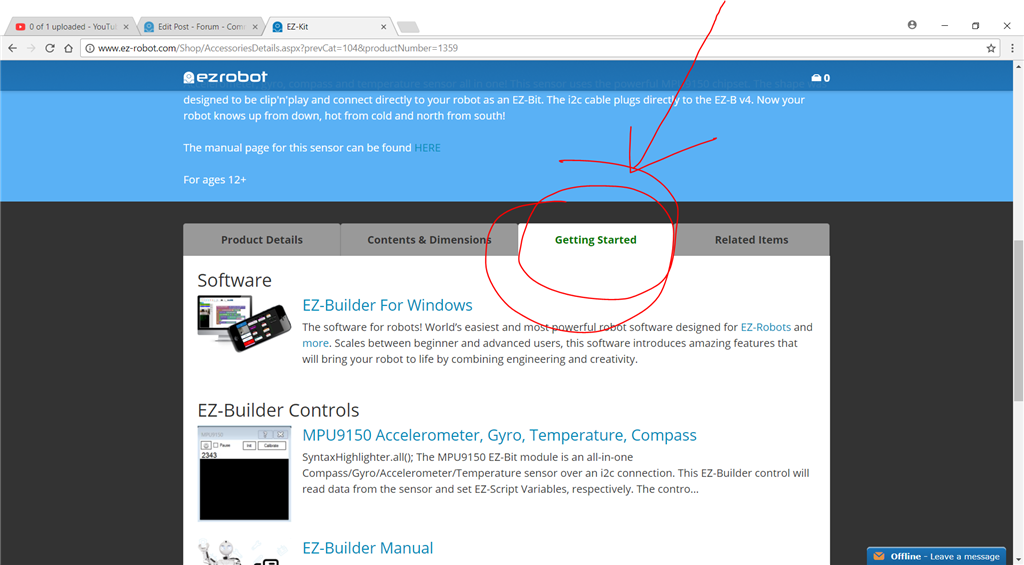 Doron
USA
#8   Oct 2017
A big ,thank you folks, going out to thetechguru, jeremie, and Overlord related to my interest in the 4-in-1. Also, of couse, I'd watched all of the training films (several times, actually) as well as several others at universities pertaining to these sensors, EZ-Robot controller, the Stamp, this sensor and others. Actually, Overlord, on one of your videos, you suggest, brilliantly, that we watch a video pertaining to how accelerators work and the process of deriving the values from the return voltages from raw components such as the MPU9150 chip used on your module. None of those calculations are present in the spec-sheet but the Vcc, VDD, sensitivity, and force return mVolt limits are. When applied to the EZ-Robot project, my understanding is, all of that is done for me. When I build a Push-Broom to sweep my floor, that sensor, located at the tip of the broom-handle will have a sensitivity and amplification of the length of the handle, hence, with the acceleration data I can build motor-speed ramps up and down into my Roli, and wheeled, projects. All of that is what I wanted. The ramping part is rather important for what I want to do and, although my Roli my not be able to, or doesn't need to, I'll be able to employ that ability to other aspects of my projects and attach them to any of my EZ-Robot platforms. I currently own all of the EZ-Robot products except for JD. I don't have or need the head or feet...at the moment, but have all the other robots and boxes of spare parts. I'm flabbergasted to learn, Mr Sures, that ya'll did all that programing to enable that MPU9150 in any position. According to that article you suggested we read, that's Really-Cool. And, also cool, the MPU9250 fits this same circuit board. It happens that your 4-in-1 module orients in my EZ-Robot project as indicated on the silk-screen.
The impetus for my confusion, and original post, was the "Coming Soon" (and the editorial under the green letters) on the image at the store. I was holding it in my hand (photograph matched perfectly) and did not see the image in the software to select the one I was looking at...but there were several selections there. I read the product page several times, clicked on "Here" a couple times, clicked through many pages for a while, then read lots of posts, here, in the community area. That lead me to believe the ARC menu had not been updated to include the sensor I was holding and, basically, marked on the EZ web site as Not-Here-Yet (sic). I went back to check for an updated version of ARC but I'm up to date...and so, I came here to post but didn't expect it was a technical issue.
I understand, now, why the picture doesn't match and, although, it seems, it's been available least a year now, other builders with the same question will find this post and know how to initialize it. They'll find out like I did.
Finally, once the product is finalized and the green-letters disappear, this message-string would need to be deleted or there would be a bit->(play on words) more confusion.
Thank you for the info and the chimes ya'll. Doron
Login to post a comment