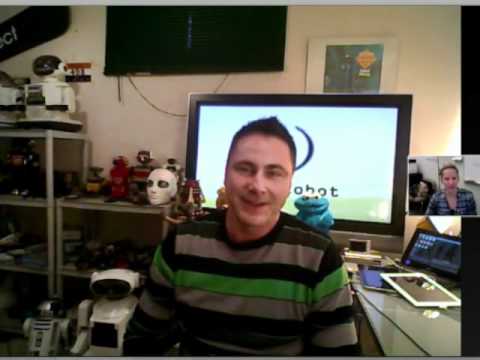 DJ Sures is a passionate Canadian roboticist. His career began many years ago as a software developer in robotics for the oil and gas industry. Eventually, he found himself deep in low-level code working for network security companies and government agencies, unrelated to robotics. He continued to create robotics and conduct A.I. research as a side business and personal interest. Over time, his robots and ideas became well known on the internet, and he decided to create his own company devoted to these ideas. As CEO and Lead Visionary of EZ-Robot, DJ provides advanced robotics for customers. Finally, anyone can build their own full-featured robot!

Cybera is looking for the movers and shakers of Alberta; the ones who are using emerging technologies to innovate their fields and raise the profile of Albertan research and development. Once a month, we will sit down with one of these tech gurus to get a perspective on where they, and their industry, are heading.

#3   Feb 2012
Great video DJ ! I think robotics are on the verge of really making some breakthroughs over the next few years. I hope the robotics industry are able to start thinking out of the box as you have. Being open to input from from the community and ideas will speed advancement. I think Steve Jobs was really good at pinpointing what there was a market for and producing a product that that would fill that need . His products usually worked very well. I do believe though that because of wanting to control his costumers $$ he actually lost some of them and slowed advancement of products. The one thing I've noticed about your business is we all feel important to it as if we are a team or family. Also your support for ideas and products that that you make nothing from , makes us even more loyal to you and your company . I think all of us wish you the best of luck on this adventure and want to see it grow. J.W.

I really appreciate the warm reception guys. It still amazes me how this idea started off as a hobby project ad turned into a business that employees people and pays for their hard work. Any normal business model would not work for my goal with ez robot. A normal Business model would imply that I discontinue development and sell the product as is. And at the end of a normal model, to support continuing development, I would need to charge for updates.

Both of those normal models are greedy. And that isn't me! I wouldn't be able to exist with open source because people would just steal the code, like the do with all open source projects - and create spin-offs which don't follow my vision. Additionally, I implement features by interacting with the users and implementing your requirements.

It's a beautiful thing we have here!

jstarne1
USA
#5   Feb 2012
In essence the fact your interacting and updating directly based on your dedicated customers business creates loyalty, irobot.had a similar business model going in the.beginning, close interaction customers and constant improvements over the years., but your.strategy is software product.instead of.equipment so everyone benefits from ongoing improvements , its as if by purchasing ezb your investing in ezrobot software and.overtime get returns in the form of product. Sorry my phone wants.to place.a.period everywhere today..... Lol